If you were to think of a typical eight to 12 year-old kid and what he or she would normally do, what would come to your mind? Images of children playing in the park, doing their homework, watching cartoons, playing games on their parents' cellphones, and generally being kids. The kids you're going to read about here, fall into the same age bracket. But there's another side to them that appears the moment they don their race suits and helmets and strap themselves into a race-spec kart.

Lined up on the grid for the Micro Max Category of the JK Tyre Rotax National Karting Championship, all they're thinking about is how to get past that kart in front of them and what the best line around the track is. They sit quietly while their parents stand beside them. Some of whom deliver a last moment pep talk, while others engage in high-fives. Still others appear engaged in intense discussions with their offspring. 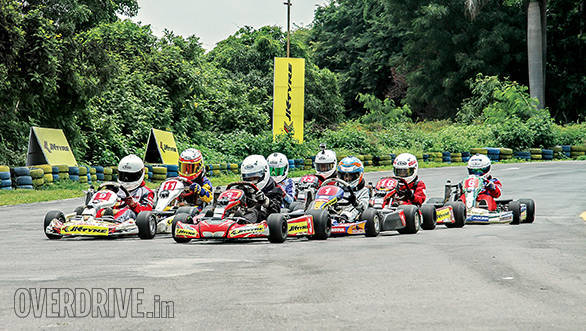 As the green flag is waved, the little ones, who were playing and goofing around with each other barely an hour ago, engage in serious battles on track. It's amazing to see how these youngsters have a sense of driving a kart around a track with such precision. They know when to brake, when and how much to steer and how to position themselves for an overtaking manoeuvre. I think back to my own childhood and how at that age I used to play with toy cars in my living room. And here these kids are, driving on a racetrack!

The top three drivers in the Micro Max category, Shahan Ali Mohsin, Ruhaan Alva and Nikhil Bohra are particularly outstanding. The story about how they got into karting and how they manage to sustain the pressure at such a tender age is as interesting as watching them drive.

The 2015 Micro Max Champion, Shahan Ali Mohsin always loved cars. At an age where kids watched Pokemon, Doraemon and the like, little Shahan watched race cars flying around a track. He was hooked, much to his father, Shahroo Mohsin's amazement. Shahan has a natural feel behind the wheel, a trait his father discovered when he took Shahan for a leisurely karting session at the karting track at Hyderabad Airport. He was fast and picked up the racing lines quickly. His father realised that his son has found his calling and wasted no time in enquiring as to where he could get his son some professional training. His search ended when he encountered Meco Motor Sports and its head, Akbar Ebrahim. Having raced in Formula 3, Ebrahim is probably one of India's best and most experienced karting coaches. Under his guidance, Shahan flourished and honed his innate skills. 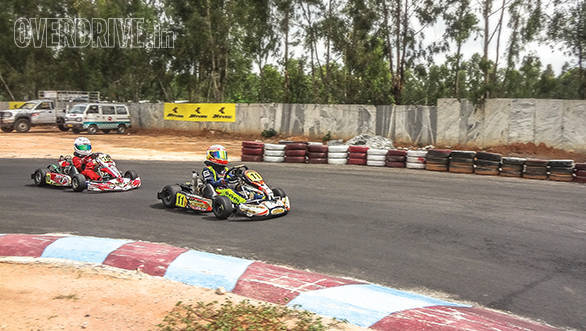 Yes, they may be tiny but the intensity of racing is mega

Another protégée under Meco Motorsport is Bangalore boy Nikhil Bohra, whose talent was discovered on his birthday. He'd turned seven and requested his father, V Bunty Bohra to take him to the E-Zone race track in Bangalore. Out with his friends, he was enjoying his time on track but the unexpected bit was that he was far quicker than the other kids. This caught the attention of a professional racer who'd come there for a quick practice session. He spoke to Nikhil's father, told him that his son exhibited serious potential and that he should enrol Nikhil with Meco Motorsport's training programme. A few calls later, Nikhil was part of the training batch where he was joined by Shahan. 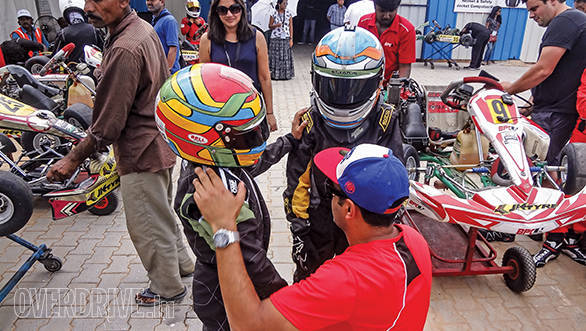 Ruhaan Alva's talent was discovered when he was at home, playing with his toy car. He was managed to drift the car, a few feet away from his father, Umakanth Alva, who at that time, was talking to a friend. Said friend asked Ruhaan to repeat the manoeuvre. Which he did again, and again, and then some more. Convinced that there was something of a racer in his son, Umakanth soon introduced Ruhaan to a go-kart and a racetrack. He was quick and Alva decided to nurture his kid's talent. After video taping his son driving around the track he sent the copies to karting teams in the UK. After a few days, Ruhaan was off to train and race with team Fusion Motorsport.

When I quizzed Umakant about why Ruhaan did not continue training in the UK this year, he replied, "They need a commitment for 100 days in a year and Ruhaan can't spare that time." What's incredible is that Ruhaan finished second in this year's championship and at age eight, he still has many years of racing ahead of him.

Now, racing at such a competitive level and managing to stand out is not easy, both for the kids as well as parents. Shahan Ali Mohsin used to work out in a gym but owing to his busy schedule, he now exercises at home. Ruhaan also works out a little when he's home. "I make him do some squats and crunches and general exercises but that's about it. He's too young for hardcore workouts," says Alva. The thought is echoed by Bunty Bohra who says that Nikhil is already doing so much that he is fit and, for now, does not need to hit the gym. 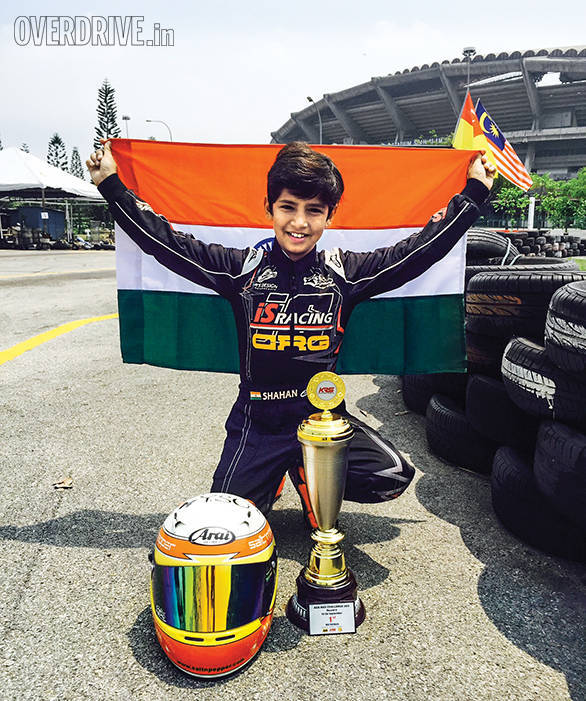 The kids make other sacrifices too as Bohra elaborates, "The kids don't lead a regular life. Nikhil at times can't be with his friends or join them for a birthday party since it coincides with a race weekend." Shahan and Ruhaan too have to give up some of the pleasures that other kids their age enjoy. Do they regret it? No. They are all well aware of the fact that to remain competitive, a small sacrifice is inevitable.They also manage their academics, with a little help from their schools who grant them holidays when needed. The kids return the favour by always making it a point to catch up on their homework and score A grades in school tests. There is a good chance that racing helps them focus better on studies too.

As part of their training, Shahan and Nikhil also travel to Malaysia. While Nikhil races for Team Stratos, Shahan races for Team iS Racing. The latter even tests and trains in Malaysia every month, sharpening his skills with each session. His commitment has already helped him bag the winner's trophy for the sixth round of the Rotax Max Asia Challenge. Nikhil will head to Italy this November, where he'll learn and race with kids from across Europe. That level of international exposure will serve as a great stepping stone.

It isn't just the children. Their parents make huge sacrifices too. Racing at this level is not cheap and coming by sponsors well it is easier to find an oasis in the desert. Besides money, they also need to take time out from their busy schedules. Bohra had flown in from Chennai, just in time to watch Nikhil begin the first heat of the final round that was being held at the Meco Kartopia Track in Bangalore. Shahan's father has to juggle race weekends and his shoe manufacturing business. "My father steps in for me while I'm away with Shahan" Shahroo says, sounding grateful for the support from his family.

Besides the trophies and accolades, these young karters learn a whole lot more from racing. They are focussed, determined, disciplined and begin developing sportsmanship from a young age. They know what it's like to win but more importantly know how to tackle defeat. They know they can bounce back. Yes, they have a lot more self-confidence than an
average kid. 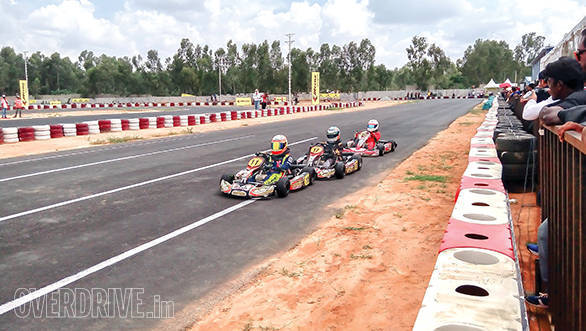 Shahan, Nikhil and Ruhaan fight closely for the first position

Racing, it would also appear, has obvious benefits within the family. Speaking to Shahan, Ruhaan and Nikhil's fathers, I could sense how happy they felt about getting time to spend with their kids. They talk a lot more, discuss the races and the life lessons they learnt that weekend. Shahan's father says, "The races have helped my friendship with my son."

Motorsport has definitely brought everyone closer. In fact, Bunty Bohra, before every race, ritualistically forms a circle with his kids (Nikhil and his youngerbrother Akshay Bohra who also competes in the Micro Max Category) where they hold hands and make a promise to have fun, learn, do their best and kick ass. The kids enjoy this and Bohra feels more connected to them.

As far as future plans go, none of the parents are even thinking about Formula 1. They say that they are going to go step-by-step and are happy as long as their kids are enjoying what they're doing.

Michael Schumacher was four when his father put him in a kart. At age six, he won his first club championship. These kids have begun their racing careers at a young age too. They have the urge to learn. They have the skills to compete. Racing in the upper echelons of motorsport will definitely take a toll on them and their parents. We can only hope that they find the right kind of support in the future, for it's these kids that could take Indian motorsport to greater heights.