Winters in the mountains are incredibly beautiful, snow transforming already stunning vistas into literal paintings; entire valleys brushed in pure white, with just treetops poking through the lush blankets of snow. But winters can also be beyond harsh, especially with temperatures touching 10 degrees below zero! Fluffy, pristine white mounds of snow soon turn to muddy brown piles of slush making roads more than a handful to navigate, not to mention the melting runoff freezing back into black ice  something that looks exactly like the road surface below it but with about a hundred times less traction. 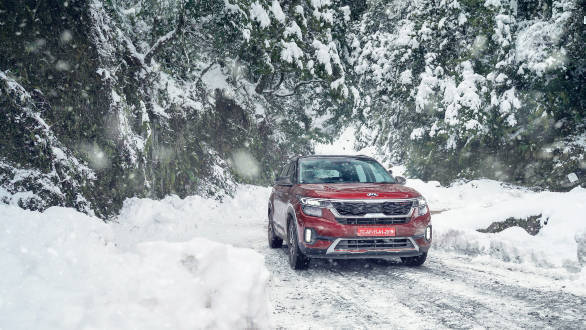 Which of course makes it the perfect setting to put the Terrain modes on the Seltos to the ultimate test! Not to mention that with the number of 'ice' or 'snow' related design features on the Seltos, it's fair to say we know what the designers favourite season of the year is. From the ice-cube DRLs stacked one on top of another, to the snowflake pattern 17-inch wheels, we can't think of an SUV that looks more at home in the cold stuff. 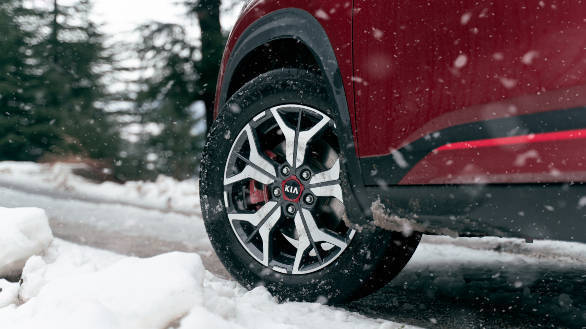 And speaking of people at home in the snow, while most people living in the Himalayas migrate to warmer climates and hotter business during the winter, there are a few badasses who look at the frigid weather as an opportunity. But we'll get to them shortly. First off, the Seltos. The drive from Delhi to Manali presented us with the perfect opportunity to really put the drive modes on the Seltos to good use. Available on the 1.4-litre turbo petrol mated to the 7-speed dual-clutch transmission, the drive modes really make the Seltos feel engineered for exactly what you want it to do. Out on the highway to Chandigarh, where we've long since decided to just drive with the chaotic traffic instead of trying to beat it, Eco mode with its softer throttle responses took the guesswork out of modulating our speed. Which means the Seltos also showed us fuel efficiency numbers that came quite close to the often unrealistic-sounding figures as certified! 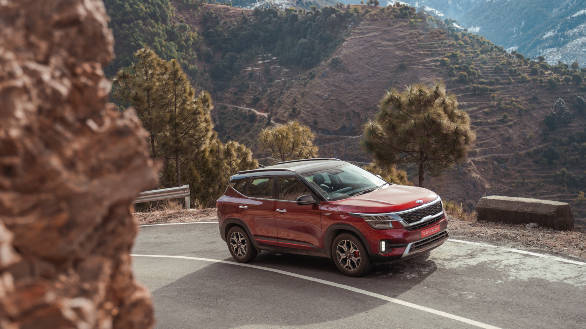 Now, if you're making the drive, you owe it to yourself to be a little badass and ignore what the Seltos' accurate onboard navigation says, and turn off at Mandi towards Bijaura. A little known shortcut en route to Kandi pass, it takes you through some of the best driving roads in Himachal. Which meant that the Drive mode dial soon found itself in the Sport position, and a wide grin found itself plastered across my face. It's quite the feat that Kia engineers have managed to get the balance between ride comfort and handling so right, a fact that only gets amplified with the extra eagerness of the Seltos' responses in Sport mode  a tighter feel from the steering, and sharper reactions to throttle inputs help you make the most of the excellent low and mid-range shove from the turbo motor. 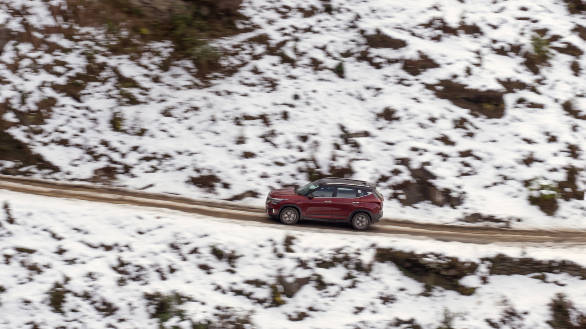 We were having so much fun, we also chose to ignore the most ominous of signs when driving in the hills  a complete and utter lack of oncoming traffic. Sure enough, it turned out that a couple of cars had slid into each other on the snowy roads ahead, completely blocking off the road. A quick U-turn later we found ourselves back on the main highway to Manali, which is not great at all through Pandoh and Aut until you hit Kullu, where the road has finally been widened enough to make quick progress. 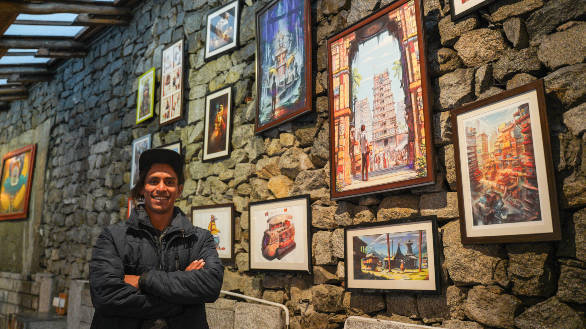 With Manali covered in snow, and more bad weather forecasted, we were convinced our grand plans would essentially be reduced to huddling around a fire in the well-below-freezing temperatures while the rain turned to snow. Of course, our buddy in Manali, Dhruv Chakkamadam, was having none of that. A graphic designer turned trick-liner and all-around badass, chances are you'll find him livening up one of Old Manali's coolest cafes, The Shed. Well, he owns the place and the funky conceptual artwork you see on its walls, or even on the walls of the Johnson's hotel in New Manali, will soon be on your very own T-shirt. But we were there because he'd promised to take us to one of the best spots to snowboard come what may. 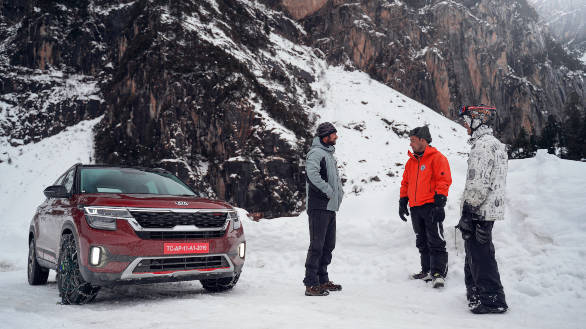 Little did we know that he had a surprise planned for us. He'd called across a friend and one of the most recognisable faces in Manali to adventure seekers, Praveen Sood, or Pintu as he's known to half the valley. Pintu runs the Himalayan Extreme Centre, again based in Old Manali, and organises the most badass tour of the Himalayas  a 6,000m backcountry skiing expedition, which also makes him one of the only guys worldwide to offer a ski experience like it from those altitudes. With these two for company, you can be sure quite a few limits were about to be pushed. 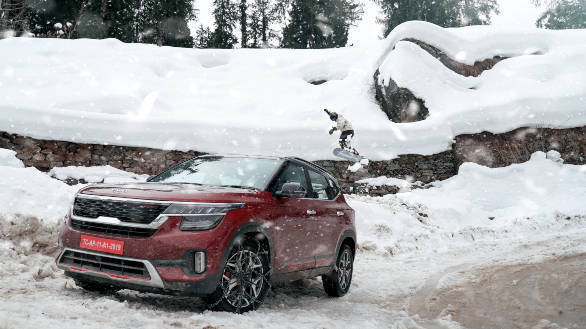 Sure enough, the very first challenge came in the road up to Sethan village, the nearest civilisation to the over 4,000m high Hamta pass. Made of 35 hairpins and non-existent tarmac, the snow lay over a foot and a half thick in some places  clearly pure four-wheel drive territory. Time to call Snow mode into action. 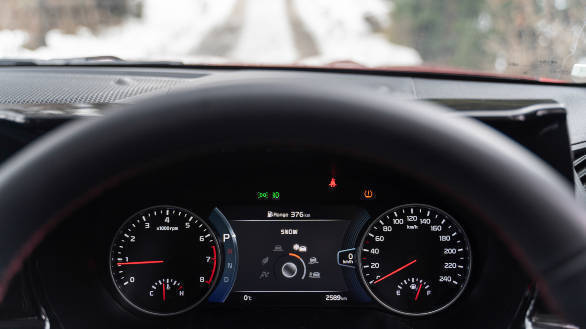 In theory, it softens throttle response, and lessens interference from the traction control and electronic stability control to allow for just the right amount of wheelspin. In real life, it made converts out of Dhruv, Pintu and half the locals who would've sworn there was no way a two-wheel drive SUV would've made it up. And we single out Snow mode as the sole reason for it, because the moment we tried without it engaged, we found ourselves at ends with the slick surface. 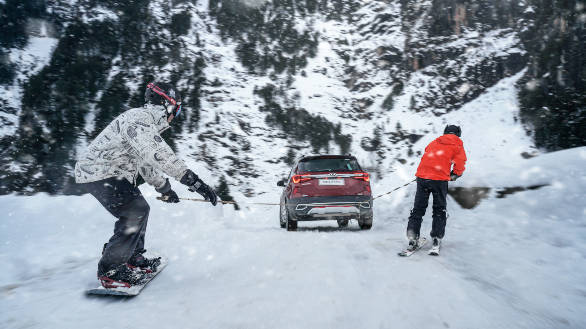 Of course, the ultimate test came when Dhruv and Pintu suggested that we drive further than any other two-wheel drive had ever gone, right up to the top. We learnt later that the reason they wanted to do this, was to get a helping hand from the Seltos. Given the rain and snow, the usually pristine slopes of Sethan were covered in hard snow  no good for speed, or fun. So instead we threw snow chains over the front wheels of the Seltos to get more traction over the icy roads, set up a couple of tow straps to the rear of it, and set off with two absolute badasses hooked up to the Seltos blasting down the snowy road at 70kmph! You would think it'd be a white-knuckle drive, but the Seltos with Snow mode and snow chains proved to be the ultimate four-wheel drive cheat code. Corners too were dispensed with a hint of opposite lock, to straighten out the Seltos with Dhruv and Pintu criss-crossing their way over and above the snow banks. Suffice to say, the people of Sethan village have now probably seen it all! And while it would've taken a long while for me to try out their weapons on the slopes, both of them were sold on the Seltos' great cabin, peppy motor and comfortable ride within minutes of driving it. 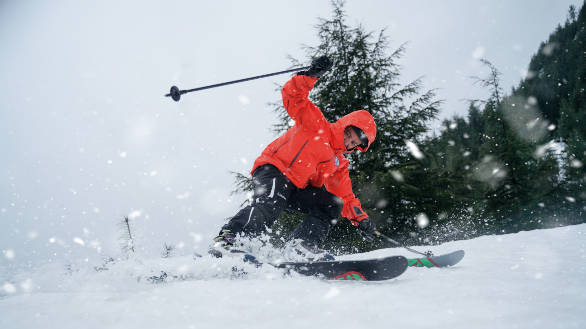 Later, finally huddled around a fire, we learn that this was just another day in their lives  they're always up for a challenge, even more so if it means not just allowing bad weather to dictate their lives. Heck, Dhruv even jumps into icy-cold ponds to keep fit, and Pintu regularly makes eight-hour treks in near white-out snowstorms to get the freshest powder to ski on. If that isn't the most badass thing you've heard today, I don't know what is. 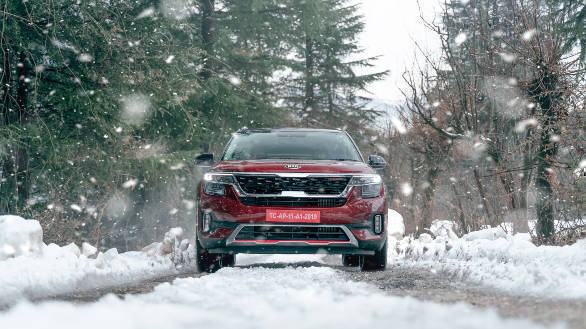