In today's day and age there are a multitude of apps and technologies that offer convenience only a touch of a button away. There's one thing, however, that you cannot have control over, and that is time. In our target-chasing, deadline-beating, money-spinning lives, we've lost track of time as it slips away like sand from a tightly clenched fist. In the end you feel empty, devoid of memories. I guess, that's what prompted us to drop everything and head to the mountains, in the largest state in India's lush North East, Arunachal Pradesh.

For a region that's remote and has terrain ranging from tarmac to broken roads to slush,  we had to pick a vehicle that's built for the challenge. And that is why we chose the Jeep Compass 4x4, not only because it bears an iconic name, but also because it'll be a true test of the Compass' capabilities. 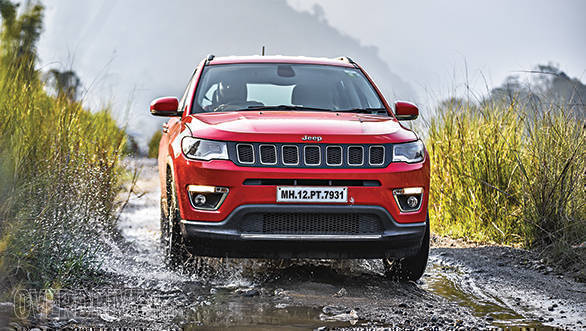 We picked up the Compass from the Jeep dealer in Guwahati and headed straight for the Assam-Arunachal border, situated in Bhalukpong. A major portion of the route is part of the AH1 and hence, the roads are pretty smooth. This allowed us to make full use of the Compass' 179PS/ 350Nm engine. The sixth gear also translates to a relaxed cruising pace and we made it to Bhalukpong in no time. From then on the climb up to Bomdila, our first stop for the night, begins. 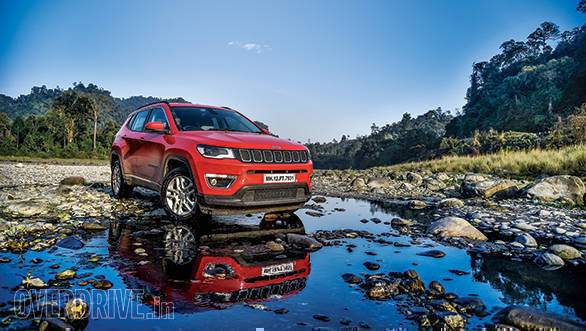 Almost immediately after you cross over into Arunachal Pradesh, the scenery changes. The dense forests of the Nameri wildlife reserve in Assam were behind us and we were surrounded by towering mountains on either side of the road. At the bottom of the valley is the gushing, Kameng river. Call it a temptation, if you will, but we could not resist driving down to the river bank. There was a short, sandy path that we had to traverse to get there and the Active Drive with Selec-Terrain system in the Jeep Compass made easy work of it. All I had to was turn the mode selector to Sand and the electronics took care of the rest. 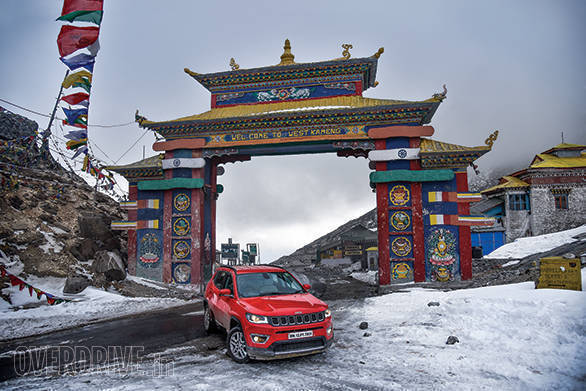 Having had our share of fun, we began the climb up to Bomdilla and reached Anu Homestay, our abode for the night.  The next day after having our grub, we set off for the longest leg of our journey- Bomdila to Tawang via the Sela Pass. This high-altitude pass separates Tawang and the West Kameng district in Arunachal Pradesh and is named after someone who I'll reveal a little later. At 13,700ft, Sela pass is known for weather conditions that change without warning and usually in a matter of minutes. While driving up, in a distance, we could see the Pass soaked in the warm glow of the sun, but 10km later, when we reached the summit , the weather was cold and breezy. We did encounter some snowfall while moving down towards Tawang, but then it began to snow properly. The resulting mix of slush and snow made driving a little challenging, however, slotting the Selec-Terrain system to Snow mode took care of any traction issues, enroute to Tawang. 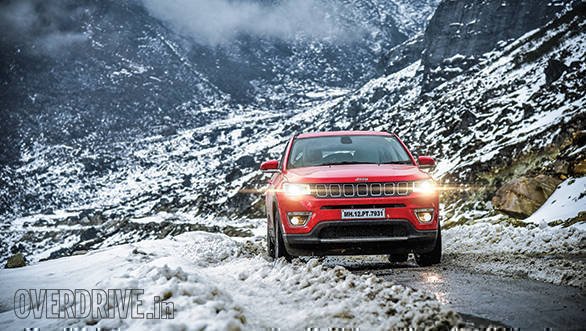 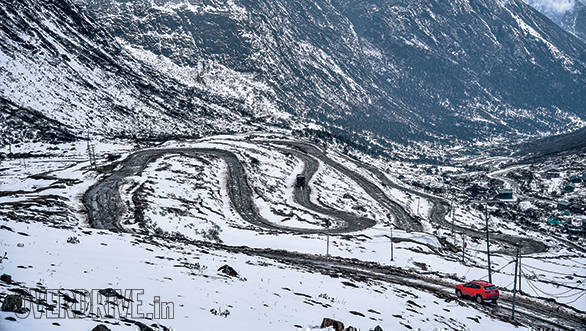 Next day, the agenda was to visit the Tawang Monastery, the largest in India and the second largest Buddhist monastery in the world. Situated on a hill that overlooks the town of Tawang, this monastery has 65 residential buildings and is home to over 450 monks. As we sat inside the main prayer hall, swathed in colourful murals, we slipped into a calm and meditative state of mind. Far away from the chaos in this world, the sense of peace those moments offered were priceless. 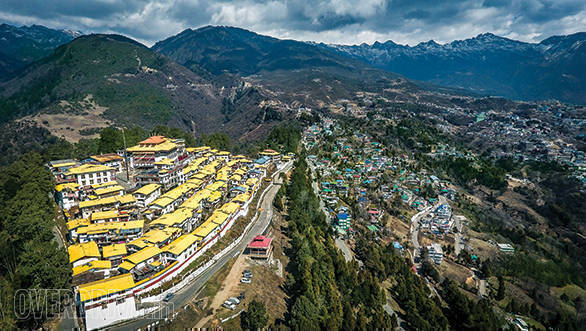 Heading back to Dirang, the following day, we stopped to meet someone special. Jaswant Singh Rawat was a rifleman in the 4th battalion of the Garhwal Regiment. During the 1962 Indo-Sino war, Jaswant Singh's batallion was asked to fall back due to delpeting ammunition reserves and other resources. Jaswant, however, refused to budge and continued battling the advancing Chinese troops, all by himself. He held the post for three days, but on 17th November, 1962, he succumbed to a bullet from the enemy. In honour of his bravery the Indian Army built Jaswant Garh at the same post that he guarded to his last breath. To date, Rawat's shoes are polished and bed is made, as if he is still alive. During the three day stand-off, Jaswant Singh was assisted by a Monpa girl from the local village, who brought him food and water. Her name was Sela and that's how Sela Pass gets its name. With a heavy heart we got back into our Jeep and drove towards Dirang, our thoughts flooded with imaginary pictures of what the battle scene would have been like. All we could do is salute the selfless sacrifice of a very brave soldier. 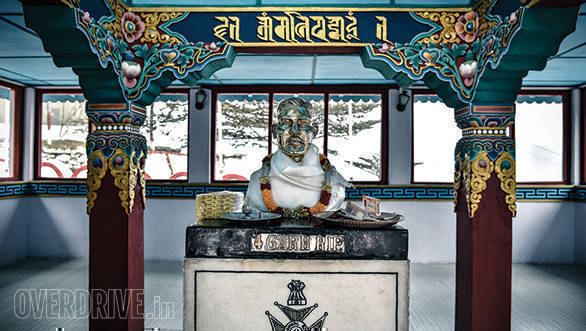 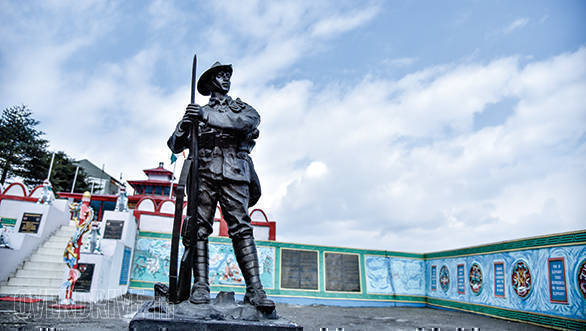 Upon reaching Dirang, we set course for Sangti Valley, which lies about 7-8km from the Dirang market. Picturesque and untouched by the evils of commercialisation, Sangti is a quaint village that has strived to preserve what nature has offered in abundance. We checked into Letro's Homestay, in two of his four tents on the banks of the Sangti river. 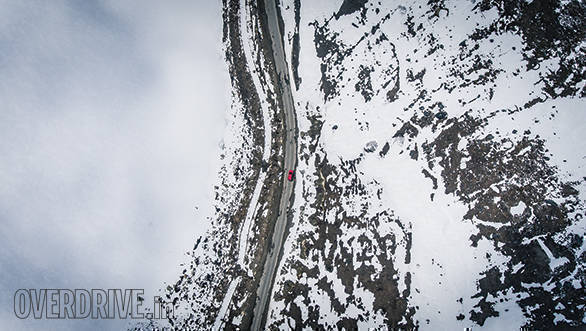 The huge mountain face on one side and the gushing river on the other, along with the gentle breeze made it the perfect place to settle down and leave our worries behind . We spent the rest of the evening, listening to the sound of the flowing water. It is one of the most surreal experiences that nature can offer. Time stood still, as we gathered by the bonfire and caught up with ourselves.

On the way back to Guwahati, our friend Lhakpa Tsering, who joined us at Letro's, took us to his relative Rinchin's home to indulge in some local, Monpa cuisine. There was chicken cooked in a broth made from Yak cheese, freshwater fish, red rice, local chutney and homemade noodles. The food was incredibly delicious, though we had to develop a taste for the chicken broth. 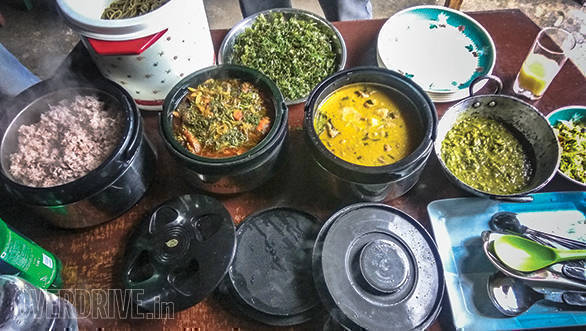 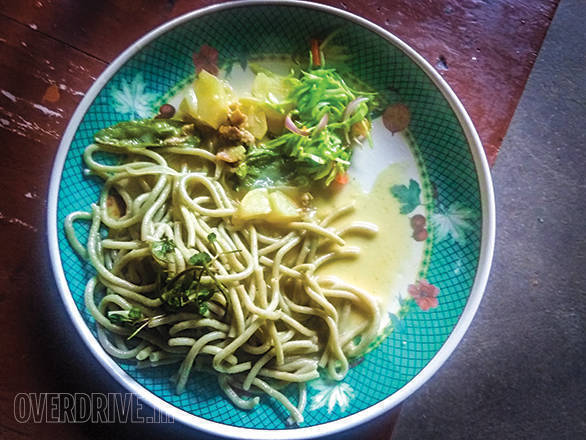 What made the experience even better was the warm and welcoming nature of Rinchin and his family. 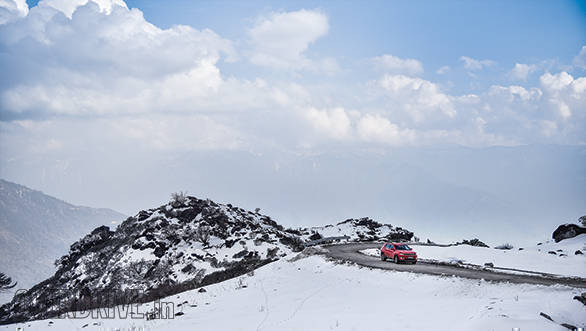 As we drove back to the plains, we felt happy and content. A week in the hills had filled us with memories that were firmly etched in our head. From the verdant mountains to the ice capped peaks, to the people we met all along. This escape from the big city life had left us feeling nothing short of rejuvenated.

What also made it so easy and stress free is our trusty, Jeep Compass. Its powerful engine never felt out of breath, no matter the gradient. The interiors are spacious and the well contoured seats are comfortable even after covering long distances, while the crisp sound from the music system kept us entertained throughout. And when we decided to wander off tarmac, on a whim, the Active Drive with Selec-Terrain system kept us from getting stranded. 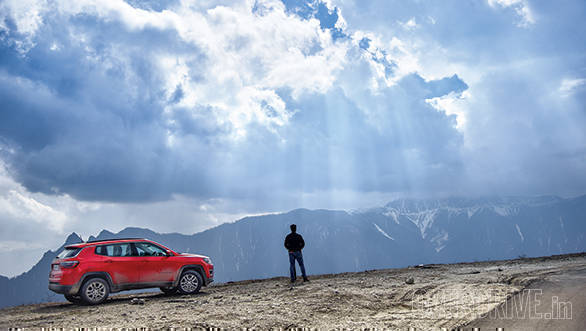 So here's a question to you. What's keeping you glued to your desk? Get out the there and explore. Find something new, experience what's different; feed your soul. Your time is now.