Every year, team OVERDRIVE and Mercedes-Benz take off on a journey to some of the remotest corners in India, for a stargazing experience unlike any other. Starstruck has always been regarded as the ultimate way to witness those twinkling objects in the sky, and the highlight always is the luxurious fleet of Mercedes-Benz SUVs that have ferried us to wherever we've desired.
The three-pointed star, as its known, is the benchmark of an effortless journey. So far, we've always headed to the rarefied atmosphere in and around Leh in Jammu- Kashmir. This year, however, we decided to explore the skies, closer to base. We split the event, this year, into three legs - Delhi to Alwar, Pune to Koynanagar and Mangalore to Chikmagalur. 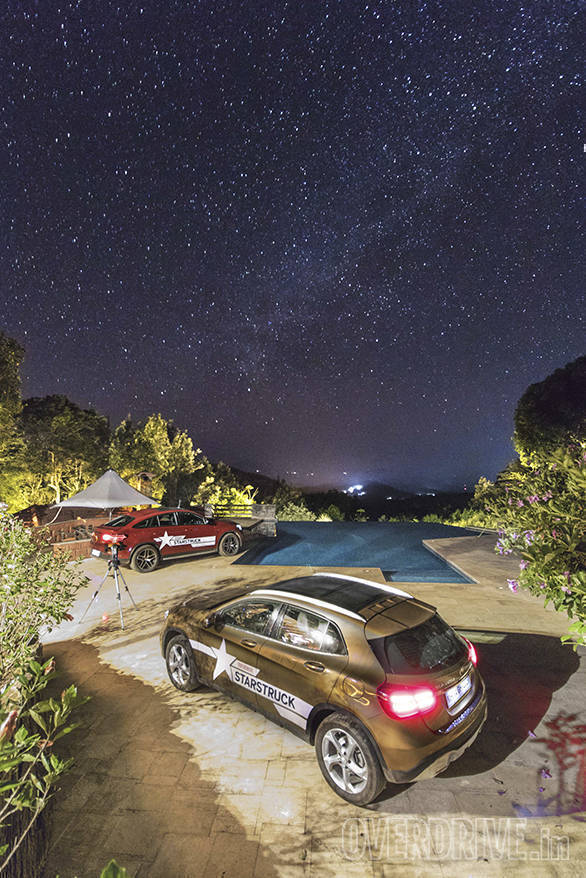 On a cold, winter morning we gathered at the forecourt of the JW Marriott in Aerocity, near the New Delhi Airport. The excitement in the air was palpable as our convoy of Mercedes-Benz SUVs, the GLA, GLC, GLE, and GLS arrived. Taking center stage was the newly launched GLC 43 AMG Coupe. Hearing its 367PS, 3-litre V6, Biturbo engine fire up, brought an instant smile on everyone's faces. 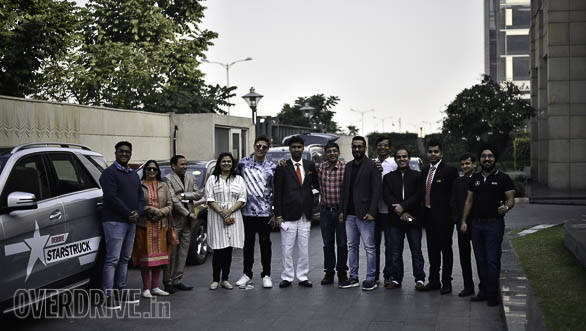 We were all smiles at the flag-off of Starstruck 2017, at the JW Marriot in Delhi

Getting out of Delhi was a nightmare as our convoy had to jostle for space on the crowded Delhi-Jaipur, near the Manesar toll. The Mercedes-Benz SUVs though, were surprisingly easy to maneuver through traffic. After 30km, the road opened up, and we could finally stretch the legs of our Mercedes-Benz SUVs. The AMG, was in its element, keeping the occupants entertained with its pops and crackles on downshifts.
Hodil Singh and his wife Guddo Singh were blown away by the GLC " I love the exterior design as well as the quality of the materials in the cabin." 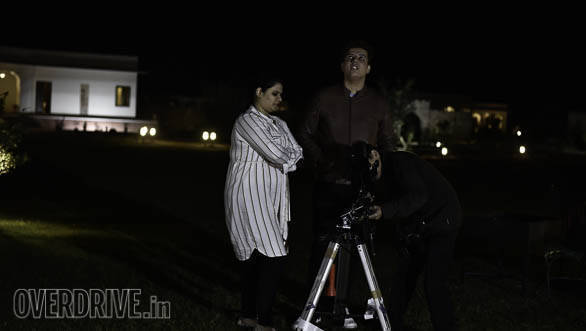 The roads all the way to Gandharva Retreat, our hotel near Alwar, were smooth and we made it there by late afternoon.Post lunch we drove down to Alwar Fort that adjoins the Sariska Tiger Reserve. Located on a hill in the Aravalli mountain range, the Fort was built in the 15th century by Hasan Khan Mewati, a Rajput ruler. Walking around the premises took us back in time, giving us a peek into history. Later on, we drove into the Sariska Tiger Reserve. While we didn't spot the wild cat, we did manage to grab a glimpse of its prey, the Sambar deer. Driving across the dense forest in the dark was a unique experience, and the Mercedes-Benz SUVs made it all too easy. 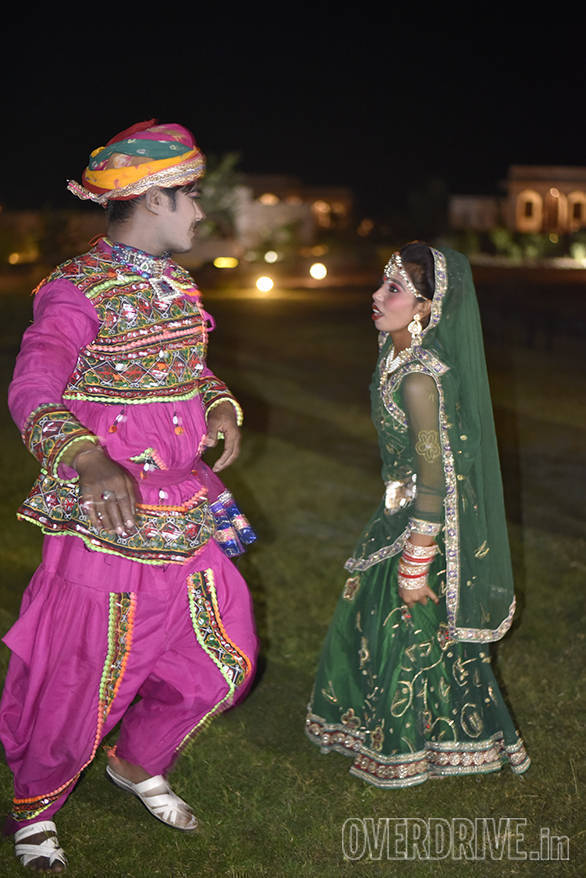 That night, a cultural dance troupe introduced us to the traditional, Rajasthan dance forms. After some incredible performances, Jatin Rathod, an astronomer from the Nehru Planetarium, in Mumbai set up his telescope and took our participants on a never before journey into the night sky. "I have never seen a sky so clear. I also had no idea about various constellations. It was truly, an enriching experience, "said Gulvansh Sakhuja. 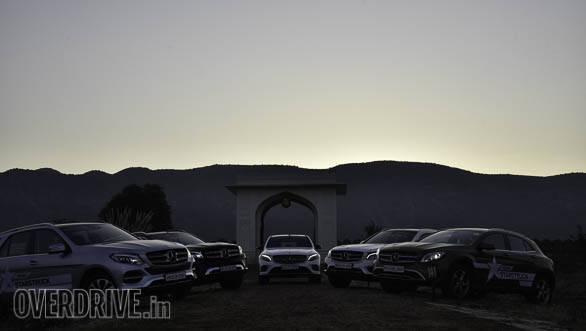 The next day, while returning to Delhi, Meghna Sakhuja, couldn't stop praising the comfort and ease of driving the GLE. It was her first time, driving an automatic, but she took to it like fish to water. In the end, all the participants has a unanimous agreement. Nothing comes close to the relaxed driving feel of a Mercedes-Benz.

The second leg of Starstruck 2017 had a rather special beginning. Our motley bunch of participants had assembled at the Mercedes-Benz factory in Chakan, Pune to begin the drive up to Koynanagar. After a quick briefing at the Center of Excellence, where the latest Mercedes-Benz, as well as AMG cars, are kept, we were flagged off by Mercedes-Benz India's officials. 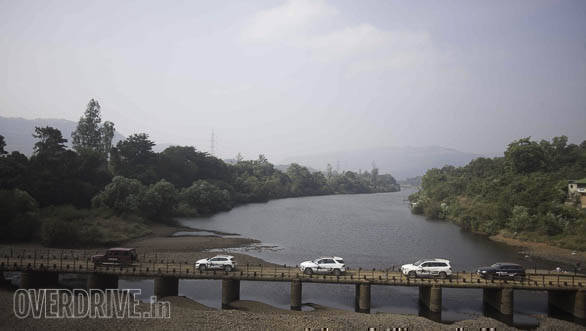 After filtering through a sea of cars and bikes, our convoy got on NH4. Seated in the mighty, Mercedes-AMG G63, Hemant Suthar exclaimed, "I can finally unleash the beast!" A couple of clicks down the gearbox, followed by a firm step on the throttle saw the big, burly SUV hurtle towards the horizon. Accompanied by a sinister growl, it left Hemant and his wife Geeta giggling and laughing. "I'm going to call the G63 AMG a monster" said Geeta. 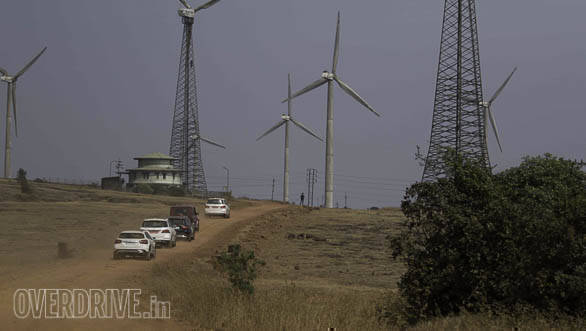 The giant windmills left everyone captivated

After getting off NH4, the drive towards our destination, Forest Escapes Holiday Homes, was equally relaxed, despite the two lane road and the hustle and bustle around the village of Patan, that one needs to cross along the way. 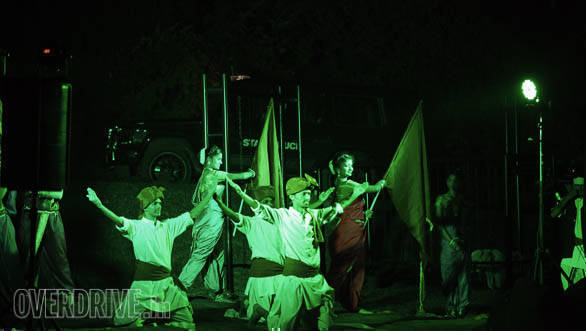 Later that day, we ventured into the dense jungles of the Sahyadri Tiger Reserve. The mud trail inside the jungle was quite narrow, strewn with rocks and deep ruts. The GLA, G63, GLC and GLE are equipped with Mercedes-Benz's 4MATIC, all-wheel drive system which made short work of driving over the difficult terrain. 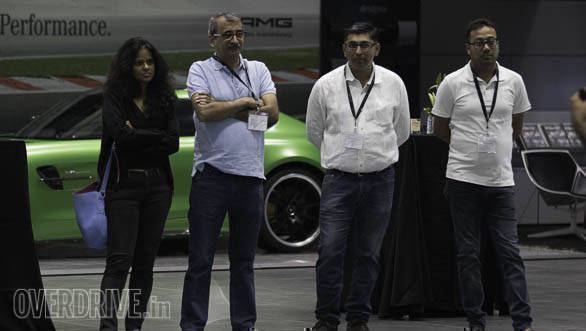 Even the relatively large, GLS turned out to be pretty easy to drive in the tight confines of the jungle. "I can't believe how easy the GLS is to maneuver, "said a surprised Animesh Kumar, a participant from Pune. Out, in the wild, we spotted a giant squirrel, the size of a monkey, as well as a few nocturnal birds. 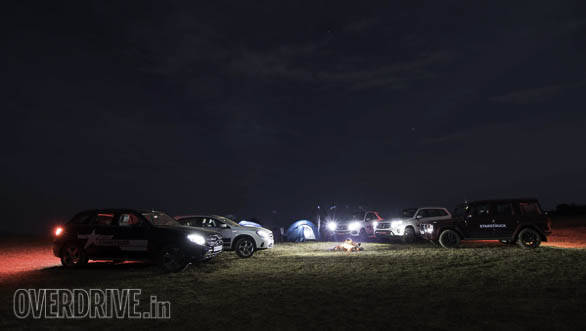 A bonfire, tents and a bunch of Mercedes-Benz SUVs huddled together, made for an interesting spot to stargaze

In the evening, we gathered around a bonfire and caught up with ourselves as well as discussed the Mercedes-Benz SUVs. Many of the participants were enamored by the sheer, mile munching ability of our Mercedes-Benz SUVs, while keeping the occupants isolated from the world outside. 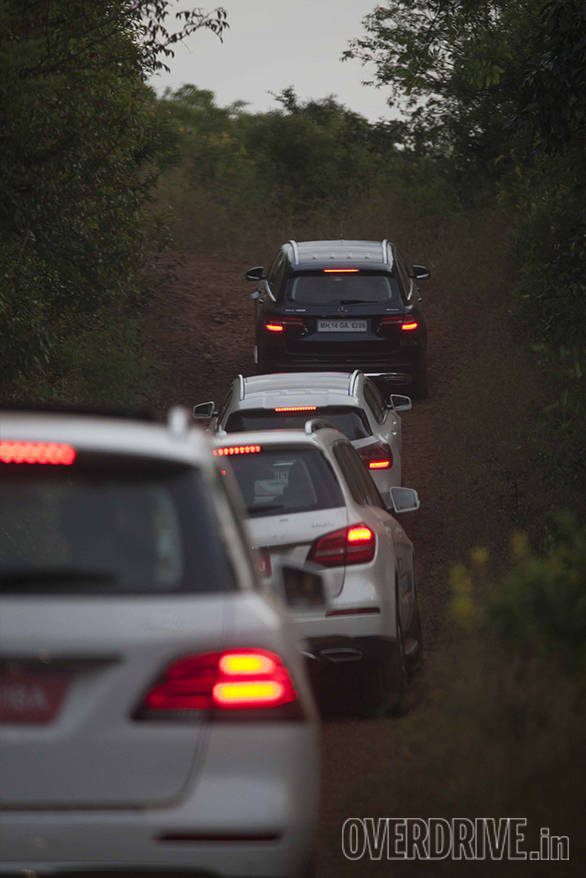 Post dinner, we drove up to a plateau, nearby and set up our telescope. Vikram Virulkar, who runs an astro experience company, Beyond Earth, was our astronomer for the night. His explanation of the position of stars and the ability to trace constellations were pretty informative. Needless to say, the participants were gripped and nobody realized that a couple of hours had gone by while stargazing.
The next day, on the way back to the Mercedes-Benz factory, we took a small detour to visit one of the largest wind mill farms in the country. Spread over acres and acres of land, the giant windmills left every one captivated. It's experiences like these that made Starstruck 2017, unique and entertaining.

Sometimes, the distance to a destination does not matter. What matters is the experience of getting there. Mangalore to Chikmagulur was the shortest stretch on Starstruck 2017, but it wasn't short on delivering an unforgettable experience. 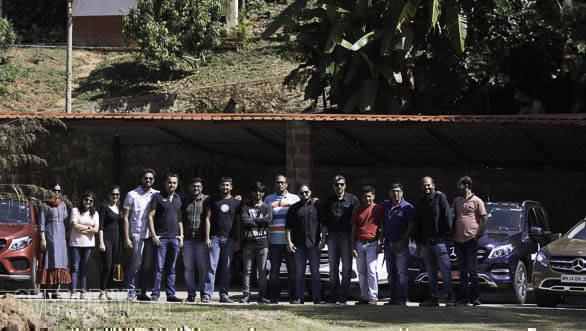 Chikmagaluru. With a fleet of Mercedes-Benz SUVs around, one is guaranteed to see happy faces

Joining the Mercedes-Benz GLA, GLC, GLE and GLS for this leg was the Mercedes-AMG GLE 450 Coupe. Sujith and Akshatha Baliga, cousins and hardcore Mercedes-Benz fans, were elated on seeing the lineup of SUVs. Seeing their enthusiasm, we put them in the AMG. As soon as we got onto the highway, Sujith floored the pedal. Besides being pushed back into the seats, the accompanying roar of the V6 motor made them even bigger fans. "Please turn off the music. I want to listen to the pops and crackles. That's my kind of music," said a beaming Akshatha. 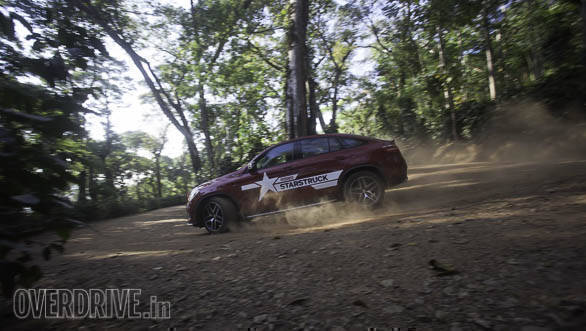 The GLE 450 AMG Coupe is as happy to play in the dirt, as on tarmac

After a short stopover we drove up the Ghats to the coffee town of Chikmagalur. Everyone was surprised by the agility of the Mercedes-Benz SUVs. The roads too, were in excellent condition, giving the participants a chance to explore the handling capabilities of SUVs, particularly the AMG and the GLA. Our destination for the evening was Villa Urvinkhan. Nestled amid a vast coffee estate, the expansive villas envelope you in the ultimate lap of luxury. The highlight of the place was the infinity pool. 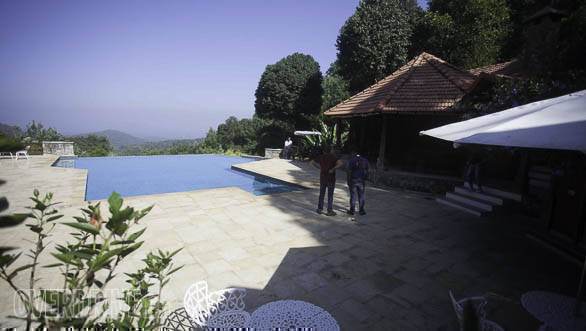 Villa Urvinkhan served as the perfect getaway, to relax and unwind

After trying their hand at fishing at a pond nearby, the participants gathered by the pool to venture into the stars and galaxies, through the eyepiece of a telescope.
Starstruck 2017 has left indelible memories in the minds of each and every participant. 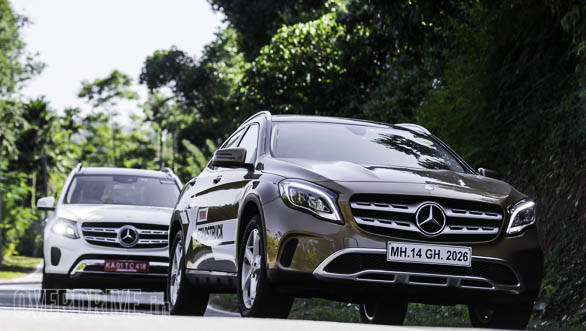 The agility of the SUVs, particularly the GLE 450 AMG and the GLS, surprised many

The rush of driving Mercedes-Benz India's finest SUVs, to indulging in a bit of off road driving, the participants were exposed to something new and different. And, it wouldn't have been possible without the mighty, Mercedes-Benz SUVs. The GLA, GLC, GLE, GLS and the AMGs cosseted the participants in ultracomfort. The three pointed star had surely left them, Starstruck.