The MTV Zorro is a flip helmet that looks a bit fussy but finish is good for the price class if a little plasticky. The graphics are great if they are to your taste and not if not. Graphics is a personal thing so there isn't any real point commenting. Flip face helmets tend to have big gaps where the jaw flips up and Steelbird seems to have been able to control that to some extent which is a good thing. What also needs examination from the utility perspective is the chin area. The bottom of the jaw piece comes too close to the chin when you centre the eye opening around the eyes. And then if you adjust the jaw to feel right in terms of space around your chin, the top of the wide jaw piece sits almost at the eye level.

The vents are hard to use with gloves. This is a problem for people like us at Team OVERDRIVE who ride with gloves but may not be an issue for the squids who don't wear them. What really does need work is the nose vent switch. It feels loose, plasticky and badly made and even exposes holes underneath when you use it. It is a matter of paying attention to the details and detracts from the perceived quality of the helmet. The flip jaw works, but it is really hard to operate. You need to use two fingers to operate it. One pulls down the front release on the outside of the helmet and the other has to press a button on the inside. I am not sure why the mechanism has to be this cumbersome to open. And that is before you go into the fact that with the chin-jawpiece not having much of a gap, it is hard to reach into the helmet. 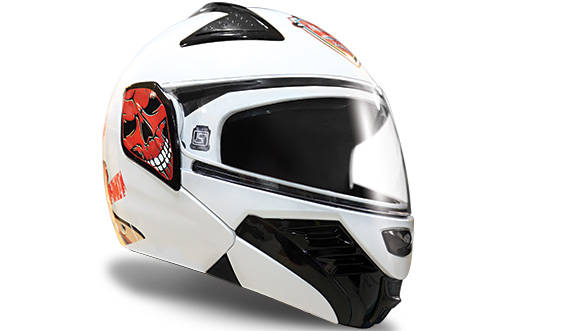 The sun visor covers the eye-hole very effectively but the mechanism is quite hard to operate and I cannot figure out how a visor replacement will be done should the need arise. The main visor is the same quality of clear visor that is currently available on similarly priced helmets. Again, I'm not sure how the visor replacement will be done. The sidepods also felt a bit flimsy and give the impression that they would break if forced out to effect a visor change. The retention system is a ratchet mechanism which makes it easy to adjust, lock and release. However, the gold standard is the double D ring which cannot be used unless it is worn snug which is a good safety feature to have.

The interiors are decently made and finished, though the coloured cloth can feel a bit synthetic to the touch initially. Unlike more expensive helmets, it cannot be removed from the helmet for washing.

Overall this is not a bad helmet for the price. However, a little more attention to detail would go a long way in making the helmet feel a lot more high-end and well finished.

Available for Rs 1,999 on steelbirdhelmet.com