Swift ICOTY Drive: Putting the Swift on the map of India

Back in the early 2000s, a car called the Swift came along and added a new dimension to the hatchback world. It gave birth to the premium-hatchback genre, and there was a hatchback that everyone wanted to upgrade to. The latter was an unknown phenomenon since a hatchback was usually the first car an individual would buy before upgrading to something larger. But the Swift established the idea that you could have the convenience and ease of use of a hatchback, with the level of luxury and safety that a sedan offered back then. That ability made it an instant hit with the people. 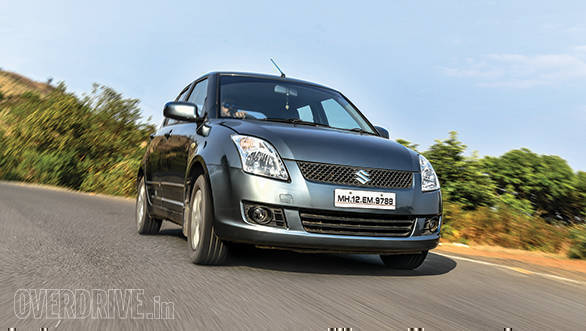 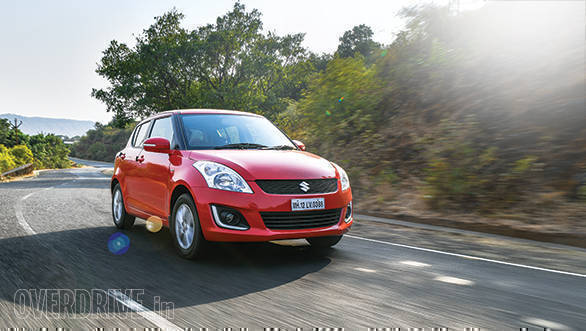 The second-generation Maruti won the ICOTY in 2012

Around the same time, the guild of Indian automotive journalists coined the Indian Car of the Year (ICOTY) award, which is today the most prestigious automotive award in the country with a jury panel comprising of some of the best and most experienced automotive journalists from India. In 2005, the Swift's facets had not only made it desirable and a household name, but it also became the first car ever to win the ICOTY award. It did not stop at that. The model that followed in 2012, was an instant success too, setting new benchmarks and becoming an ICOTY award winner. Over the years that followed, the ICOTY award has been getting even tougher to win with cars of all makes and sizes competing so closely with each other and setting new standards. But the third-generation Swift came along and literally swept away the 2019 ICOTY as swiftly as its name, and that too by a huge margin of points over the other contenders. 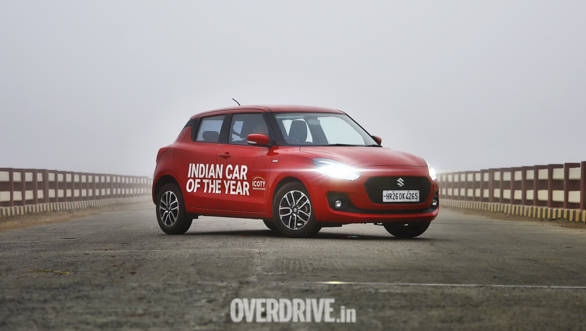 How does the Swift do it?
It is a valid question that many cars on the Indian roads often ask each other. As the cliched line goes, 'Winners don't do different things, they do things differently.' The Swift is an apt example of that. The Swift's winning formula lies in the fact that it stays true to its roots, but branches out towards new trends. Its shape is an icon in itself, giving it a cult following, while its ability to marry its much-loved attributes with forward-looking technologies, gives it a clear edge over its peers. 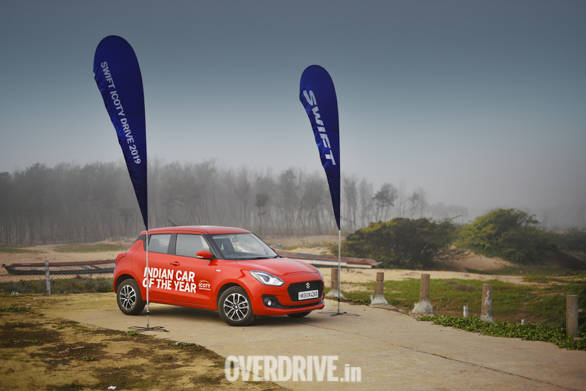 Putting the name on the map of India
There is no doubt that the Swift is the most prominent name on the ICOTY's wall of fame with three victories under its belt. Maruti Suzuki decided to celebrate that feat, but like the winner itself, the celebration had to come in a unique and hard-hitting fashion. So Maruti Suzuki collaborated with the ICOTY jury panel and etched the name SWIFT on the map of India using GPS art. How much grander can it get than this? 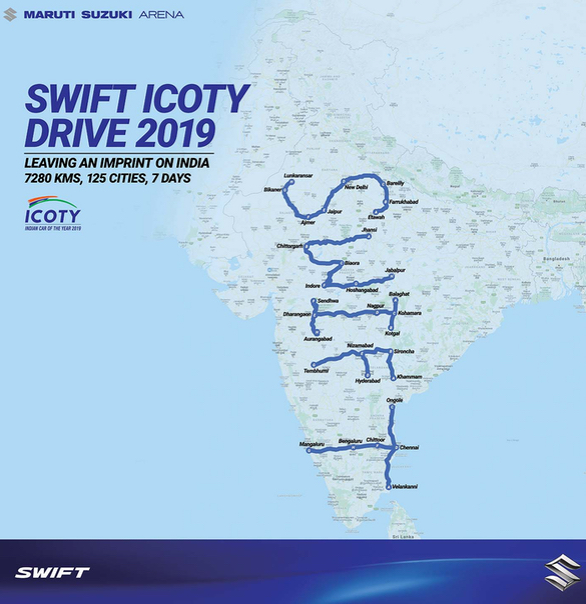 To the T
Remember the much-loved Maruti Suzuki commercial that said, "India comes home in a Maruti Suzuki"? It had a sporty red Swift (first-gen) driving down an open highway, and it looked so natural, that setting. Road trips are a natural inclination for the Swift with its fun driving dynamics and potent engines to complement, and the two generations of the Swift that followed has safeguarded this intent to the T. So road trips had to be an integral part of this celebration and the vast network of roads in India and our country's cultural diversity offer just the right canvas for this celebration. Every partnering publication was in charge of drawing a part of each letter in the word SWIFT. OVERDRIVE was chosen to drive from Ongole in Andhra Pradesh to Chennai in Tamil Nadu to etch a part of the letter T. 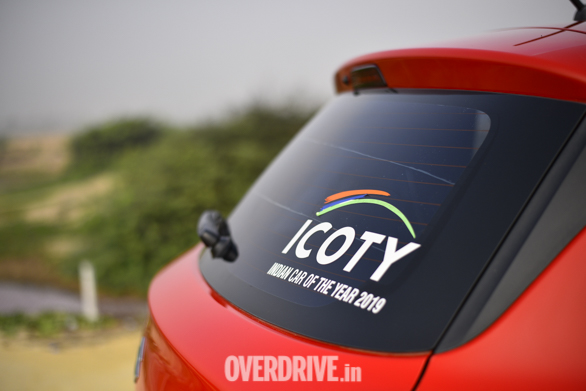 The road trip
Road trips are fun, but they need good companions to make them more exciting. Your first companion for any road trip is the car itself and it needs to be sprightly, reliable and on the same wavelength as you, to make the trip worth the while. The Swift is all of that and then some. The red colour immediately brings out that sprightly nature of the new Swift and a stand-out ICOTY livery adds the extra oomph. What complements that nature is the new HEARTECT platform that underpins this car - making it sportier and more agile than ever, and in turn a lot more fun to drive. Ongole was a great place to start with because it is surrounded by amazing driving roads - like the road to the Chirala beach, or the winding roads to the Cumbum forest range, or the serene roads to the west of Ongole that drive you through the calm and cool avenues of trees, to name a few. 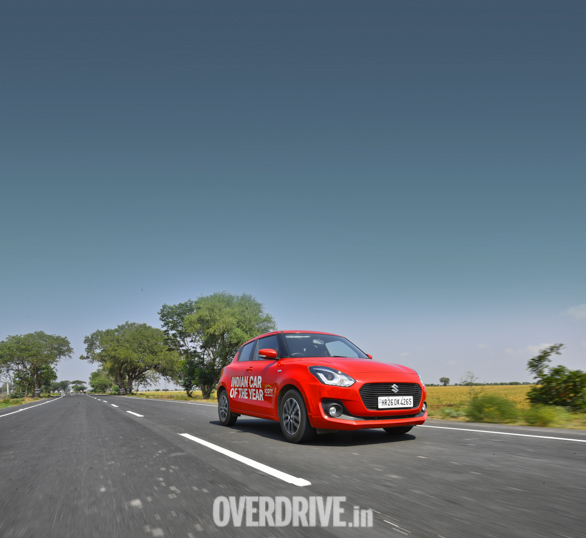 We started our day with a drive to the beach, in time for sunrise. The sun rises a tad bit early on the eastern coast, so we had to leave in the wee hours of the morning. The beams of the Swift's projector lamps and the powerful fog lamps gleamed through the dense fog and the sea mist, as we tiptoed our way through the narrow pathways that took us to the beach. Full marks to that kit, especially since even the sun couldn't make itself seen through that fog until 9 am.
The beauty of the route from Ongole to Chennai is that there are many such B-roads that take you to very close to the beaches - most of which are deserted and therefore, clean. If you love the village life, you will encounter a lot of fishermen villages on the way too. While on the road, the best way to experience the local culture is the food and every village on this route will have a pleasant surprise for you with their diverse preparations. 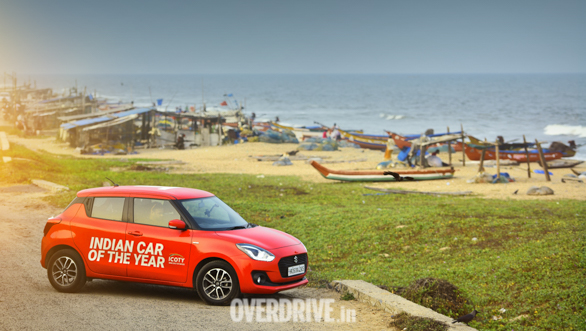 Ongole is a temple-town and the entire belt is on the radar of pilgrims all through the year. The cities and villages on this belt are used to meeting and greeting road trippers, and our Swift was an attraction for many villagers. We were often asked about our trip by the onlookers and enthusiasts, and the tech-savvy kind who had been following #SwiftICOTYdrive were amazed at the magnitude of this event and happy that they had spotted us in their town! Red also seems to be a popular colour for cars in this region as it is considered to be very auspicious. But the Swift constantly reminded us that its hat-trick at the awards had a lot more to attribute to, than its auspicious paint job alone. 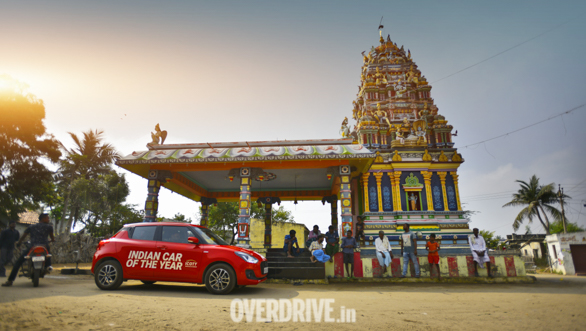 Through the journey to Chennai, the Swift was ferrying four of us and our luggage in comfort and we were adding more to it at every major junction by way of takeaways and memorabilia from this unique drive. And yet it managed to remain just as enthusiastic on the highways and off it as well, while always making the occupants feel safe with its stability and composure. A special mention also needs to be made about its audio unit, which is easily better than some of the more expensive cars out there. While conversations are very important to make a road trip worthwhile, a great background score only makes them feel more alive. And who knows this better than the car that was instrumental in urging many people to start road tripping - including me. Bringing it home
Our journey in the Swift stretched from an hour before sunrise, to a little after the sunset. In this time, we shot sequences, enjoyed great food, explored places and drove over 400km and yet, we came out the other side refreshed and ready to go further if required. It was partly because of the excitement a road trip brings with it, and largely because of the car that enabled it. The Swift was the best companion for this trip and took on everything from fast highways and broken roads, to traffic jams in the city and winding roads in the wilderness - all of it with great enthusiasm that rubbed off on all of us. How effortlessly it concluded this road trip, also left us with the feeling of achievement of etching the last letter in its name on the map of India. Sitting at the beach, staring at the car against the calm of the waves and the bright full moon, I was recalling all the road trips I have had with all generations of the Swift in the past - and each one of them had ended on a high. That is, in fact, the beauty of this car. It doesn't do different things, it does all things differently and in doing so it has earned every accolade that has come its way. Including having its name etched high up on the ICOTY's wall of fame, and now, even on the map of India.