Ten things to remember when you test-ride a motorcycle

Rule one of buying motorcycles is if you don't test ride it, do not buy it. This goes for everything from a 100cc commuter that only needs to be hardy and frugal to a litre-class superbike that is expected to be a road-going rocket. If the manufacturer doesn't give you a motorcycle so you can get a feel of it, walk away. 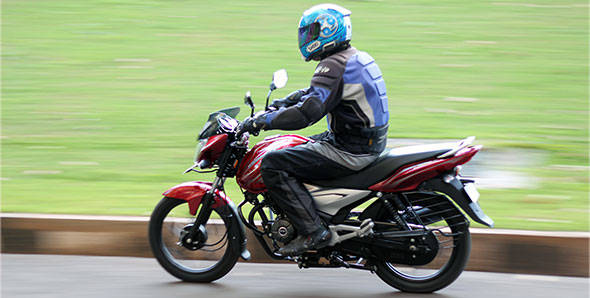 The Bajaj Discover 100T on test

But what should you do if the manufacturer does give you a motorcycle? Here is a guide to what you're looking for.

When a dealer allows you to take a spin on a motorcycle, scooter or indeed, in a car, he is hoping you're going to bring him business. This isn't the same as borrowing your friends new motorcycle and seeing if you can break land speed records with it or not. And if you abuse this privilege, as many do today, you will surely discourage the dealer from offering more people test rides in the future. Everyone loses this way. Mentally, you're setting out to figure out only the basic sense of whether or not the motorcycle delivers what you expect of it, or what it promises. Top speed testing isn't part of this.

2. Focus on the engine

As testers, we separate the refinement aspects of the drivetrain from the performance and we think you should too. So first, notice how the bike idles (sound, vibration and feel). Then as you head out, focus on clutch effort, gear shift quality and the small bits. These are the basic building blocks of whether or not you'll think of the bike as smooth and sweet. Then tune into the vibration you can feel in the pegs, through your thighs and bum and through your hands. In a low gear, rev the bike out steadily just feeling the vibration. That is all you need to form a fairly vivid, if initial, picture of how smooth and refined a bike you're riding. It can be helpful to remember a particular motorcycle that you like in this respect as a reference to crystallise your opinion. As in, "This is smooth." is a less clear picture than, "Smooth but Bike A was actually much smoother at high revs."

Once again, it isn't a great idea for you to try to see if you can match manufacturer or magazine test results on the road on your test ride. You are wasting precious time. Instead, think of performance in terms of your daily riding. Ride at a low speed in a high gear and see how the bike responds to the throttle. Then ride at a higher speed in a more appropriate gear, something you might use in traffic as an owner and see how that feels. Get a loose sense of whether you think a certain kind of performance (for instance low speed, high gear) seems to strain the engine or not. You're looking to form a picture of the motorcycle in traffic, where you're going to spend most of your riding time in most cases.

4. Focus on the brakes

Brakes are really easy to suss. You're looking to see how much the bite is. Fast bikes tend to have aggressive brakes that come on strong and can be harder to live with, in unskilled or new hands. In the case of drum brakes, you're looking for whether you think they're effective or not. A couple of decent stops will tell you the whole story, don't bother doing a full-on emergency stop.

Now venture off the good roads and wander onto the broken roads. To make it as hard as possible for the bike, arrive over bumps on a closed throttle and see how it feels. Remember in actual riding, you'll probably have a little bit of throttle on, so ride quality on the test ride will feel worse. Negotiate a pothole or two. If you're going to ride two up a lot, badger the dealer into allowing your most common pillion to join you for a short stint.

Once again, on the limit handling is beyond the scope of a test ride. You're looking mostly for confidence in the handling. Does it react as you expect to your inputs? When leaned over does it feel trustworthy? Again, having a mental reference of another motorcycle is a good idea to establish your opinion.

Once you form an impression think about the things you don't like. Motorcycles and scooters are typically designed to satisfy the needs of the widest possible swathe of target customers. What that means to you is that it won't fit yours exactly and some of the bits that don't will irk you. What you're trying to make here is a mental map of what you don't like and which parts of that can either be adjusted or replaced. For instance, a soft seat can be redone for not too much money, a handlebar grip rubber can be swapped out but a tank that doesn't fit your knees is almost impossible to fix in India - our aftermarket hasn't reached that stage yet.

8. Don't start chatting once you return

When you return to the showroom, you'll know a lot more about the bike than before the test ride. Take a moment to walk around the bike and give it a fresh, slow, considered look. This quiet time helps immensely in firming up your opinion. And you'll notice smaller bits that you haven't noticed earlier. Like maybe heel plates, foot peg position and construction etc.

Now the disclaimers. In India very few dealers put in effort to ensure that their test ride bikes are mint-condition in every sense rather than just visually. And if things like clutch cables aren't set up right, brakes are loose and stuff, the test bike will feel a bit loose too. It is usually safe to make a slight allowance that a new motorcycle when it gets delivered will be better.

10. What if the dealer refuses to give a test ride?

What the dealer is really saying is that he doesn't trust you in most cases and it is up to you to convince him that you're serious about the purchase and not out for a lark. If that doesn't work, try another dealer. If you're really desperate to the buy a bike and you can't get a test ride, get on Facebook or Twitter and see if you can locate a benevolent soul who is willing to help out. You'd be surprised how nice motorcyclists can be to each other in these situations. Finally, of course, your last option is to look for reviews from owners online and in the absence of an actual test ride, see if you can form an accurate enough picture to go out and buy a motorcycle sight unseen.