Wondering what rest day Friday is like for the teams at the 2016 24 Hours of Le Mans? Well, you soon realize that it isn't really much rest for the teams or the drivers before the big race kicks off.

It's coming down in buckets

We got to Le Mans late Thursday night. And it was pouring. Genuinely pouring in the raining cats and dogs fashion. The camping grounds were flooded, and we only just made it to our accommodation half an hour away from the track. Ankle deep in slush, of course. The first thing we did before setting out for the track on Mad Friday, was buy a pair of rubber goulashes. Dry feet are a must have for a 24 Hour Endurance Race! 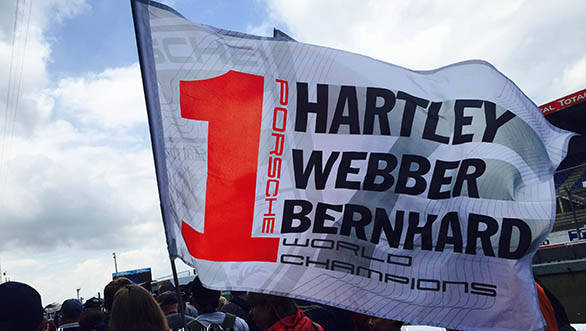 Mad Friday is the day when fans get to make it to the pit lane and watch the teams in action. There's a lot of work that needs to be done on the cars to get them race ready. After all, they have all been through three qualifying sessions, which last until midnight. Some of the crew have only left the track close to 7am. But they're all back in the garages in a couple of hours. And they're at it, repairing damage, making changes that need to be made and working to make sure that when the race kicks off at 3pm on Saturday, they're able to put their best wheel forward. 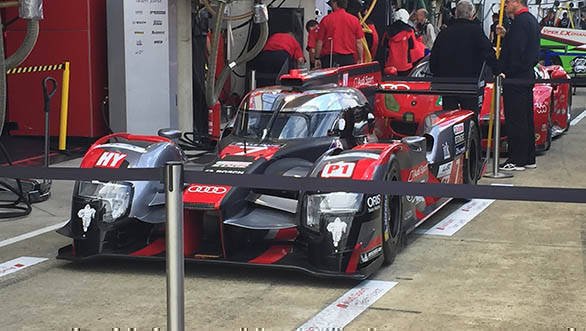 Well, it's safe to say that the three big LMP1 teams are the ones who attract the most fans. It's pretty hard to get close to enough to the garage to actually see what's going on or to catch a glimpse of the car itself. We couldn't get as close to Toyota as we would have liked. We did try manage to fight through the crowds and manage to catch a glimpse of the No.2 Porsche that's on pole. And some deft manoeuvres and body contortion meant that we were able to get a clean shot of one of the Audi R18 e-tron quattros. 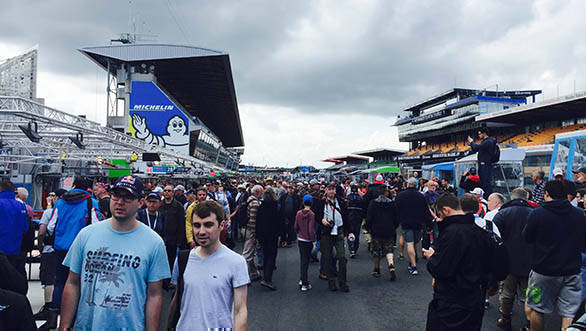 We spotted one set of fans wandering down the pit lane with flags in support of Mark Webber, Timo Bernhard and Brendon Hartley. We also saw a massive banner hanging on the grandstands that was in support of Leena Gade and her Audi drivers Andre Lotterer, Benoit Treluyer and Marcel Fassler. No surprises there, given that one set are defending WEC champions and the other set are pretty much a Le Mans dream team, having won here as a team thrice before. We also saw one bunch of fans dressed as The Avengers, accompanied by a can of Duff's Beer looking for the Audi Arena. It gets pretty crazy at Le Mans! 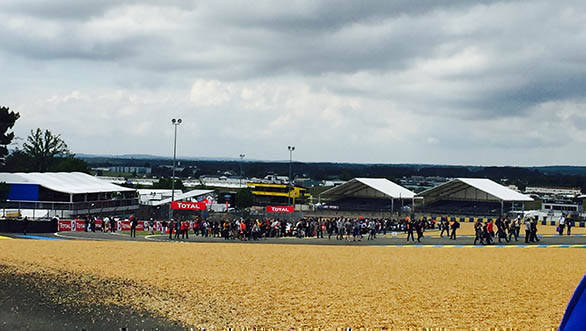 Since there's no running on the Friday, the track is empty. And a portion of it, leading from the Start Finish straight to the Dunlop Curve and just before the Porsche Curves, is open for fans. You can walk right out onto the track and even sit down in the middle of the racetrack and take a quick nap. We rested ourselves on the kerbs, since we'd walked so far. But one quick caveat - never walk on the gravel. It's usually raked to make sure it is neat and orderly. People tramping right through it isn't really appreciated! 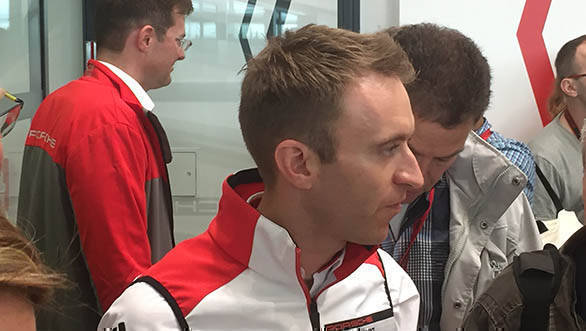 Well, they might have won the 2015 World Endurance Championship, and they might have won Le Mans last year, but Porsche isn't really breathing easy. Timo Bernhard, one of the drivers in their No.1 car, and one of the drivers who has been around since the Porsche LMP1 project came into existence in 2012 tells me that they aren't counting anyone out. "Are we worried about anyone in terms of pace? Well, everybody. Audi and Toyota have both shown they've got terrific pace, so we really need to work during the race." Although Bernard also says that another area of concern, especially given the forecast of rain, is that with poor visibility they might also need to navigate more traffic and take split second decisions with what is a larger grid this year. Tricky stuff!

The art of balance

I've always believed that the real reason people gravitate towards Motorsport, and any sport really, is because we like to win with the team and lose with the team. We live vicariously through their heroics, their highs, their lows. And we sometimes see a very very human side to the sport. However, watching Dr Frank-Steffan Walliser, head of Porsche Motorsport tear up during the Porsche press conference was genuinely heartbreaking. It's really tough for teams to be fighting at that level of competition and to feel like their efforts are being washed away by something like Balance of Performance. "Balance of Performance is something very important to the sport and also very relevant to the sport, but not this balance of Performance," he said before he had to take a moment to compose himself. But despite the massive advantage that the Ferraris and Fords appear to have in the GTE class, he recovered enough to say "But we will fight." Isn't that really what it's all about?

The other end of the spectrum 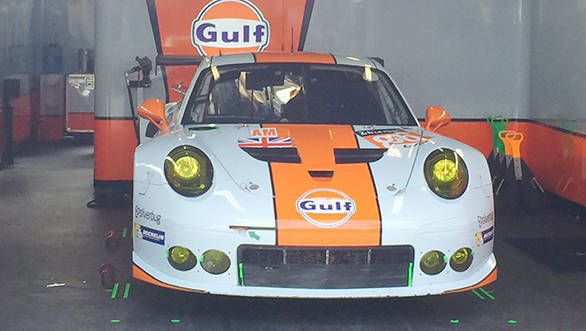 Just next to the massive Audi garage, is the Gulf Racing UK GTE Am garage. It's really the other end of the Porsche spectrum. It's a far cry from the massive budget and crew that Porsche's own LMP1 team have. It's just a small bunch of extremely passionate and hardworking Motorsport enthusiasts who really want to win Le Mans. In fact since they were wait listed fourth in the 2015 edition of the race and didn't manage to compete in the race after all, they decided the best way for them to go racing at Le Mans was to do the whole World Endurance Championship! It's all been good experience and preparation for this - the big one!

Of food and fatigue 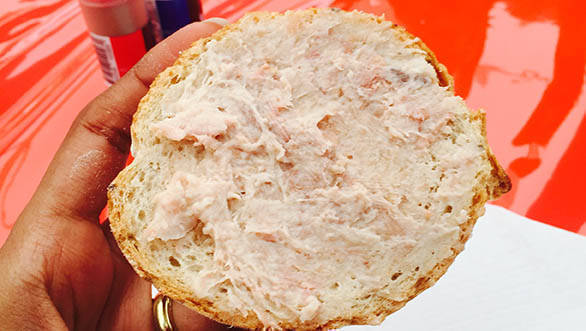 Le Mans is 13km long. Which means that the paddock and the Motorsport village that surrounds it is massive. Getting from one end of the track to the other can be really exhausting, unless you've managed to bring your own bicycle. Which also means that any food that you eat at Le Mans, you instantly burn away entirely. The best thing to fuel up on at the races, is the Rillettes. It's a spread made of either duck or pork that tastes best on some crusty bread. It's a Le Mans speciality and it's our go to Le Mans food. 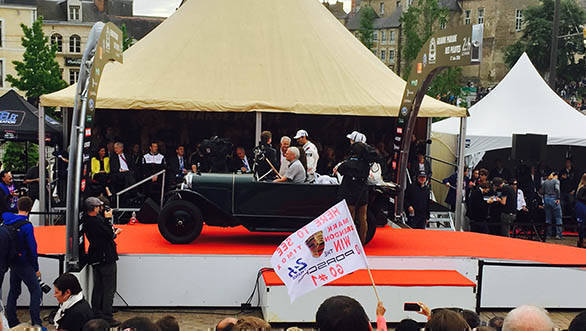 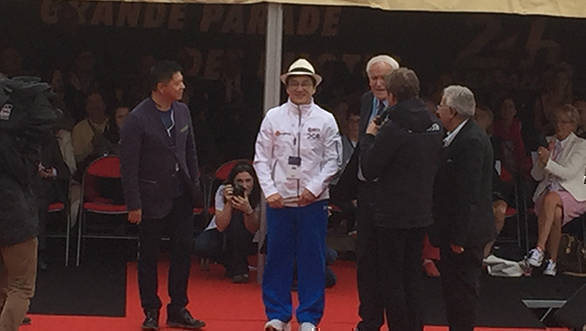 The parade at the center of Le Mans is terrific. It begins right across from the lovely cathedral and you get to watch the drivers go by in vintage cars. They wave to the crowds. Throw goodies into the audience. Sometimes get off and sign autographs for the excited fans or even stop to take a picture or two with them. Along the way they also get interviewed as they drive by, so the fans have a small glimpse of the racers live before them. It's a terrific Le Mans tradition that ensures this connect between the fans and the drivers and therefore the sport itself is maintained. This time around the Le Mans Parade also featured Jackie Chan, who was so amused by some luau dancers he saw, he sat in his chair and swayed and tapped his feet to the music.