The oldest Benz in India

In 914, Rao Bahadur PC Muthu Chettiar purchased a Benz Model 8/20 HP Runabout Tourer from Benz & Cie Germany (founded by Carl Benz). This Benz may have been made a year or so earlier, but since the original invoice, which is still in the possession of the family, is dated February 06, 1914, technically it would be classified as a 1914 model. Amazingly, for over a century this car has remained with the same family. 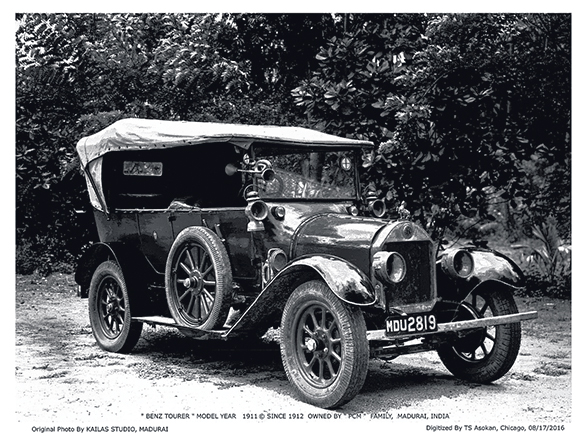 Interestingly, the invoice, which mentions the engine number and chassis number (plates of which are still on the car), has complete details like two extra seats facing forward, horn with tube, two headlamps with generator, two electric side lamps and one electric tail lamp! It also mentions the number of bearings and number of piston rings in the engine! In fact, it's almost like an inventory of all the parts that went into the making of this Benz. 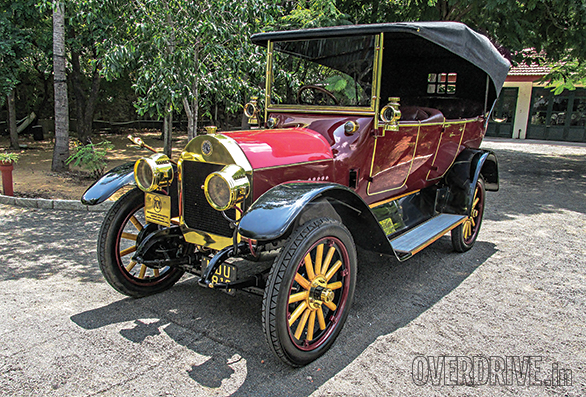 This Benz 8/20 HP was used regularly by the PCM family of Madurai right till the 1960s, when it was put away in their garage because of difficulty in obtaining spare parts. In fact, during WWII and after India's independence, the car was only kept running by the 'jugaad' of Indian mechanics. When the original tyres and wooden wheels went bad, they were replaced with newer ones from another vehicle. The radiator was replaced with one from a truck, and as it was much bigger, the bonnet had to be modified. As the bonnet became bigger, the fenders had to be changed to accommodate it. The original magneto electrical system was also changed. And after the car was left parked in the garage, many parts, especially the valuable brass ones, were pilfered by people. But the PCM family never once thought of selling or disposing this Benz as they have many nostalgic memories attached with it. 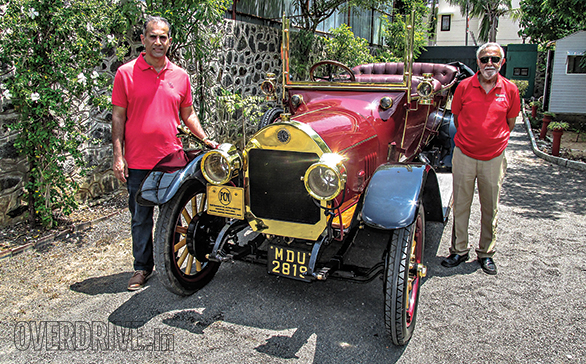 In 2013, Rajesh Somasundaram, grandson of PC Muthu Chettiar, with the full backing of the PCM family, decided to restore this Benz. Chennai-based CS Ananth was selected for the job, and the restoration brief was to deliver a roadworthy car close to its original specifications. The restoration of this pre-World War I car proved to be a big challenge due to the modifications made to it. The restoration work involved extensive research, interesting debates, incredible learning, a lot of hard work and of course a pot of money. 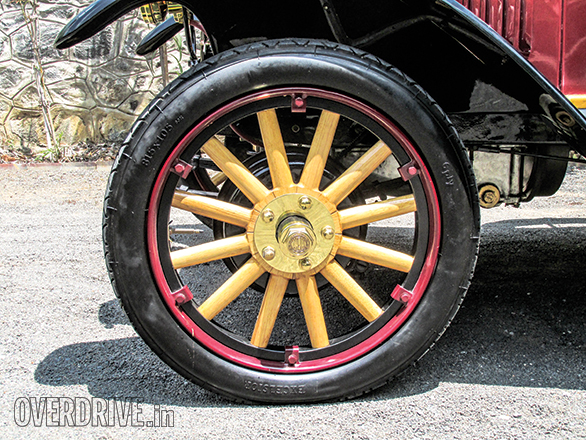 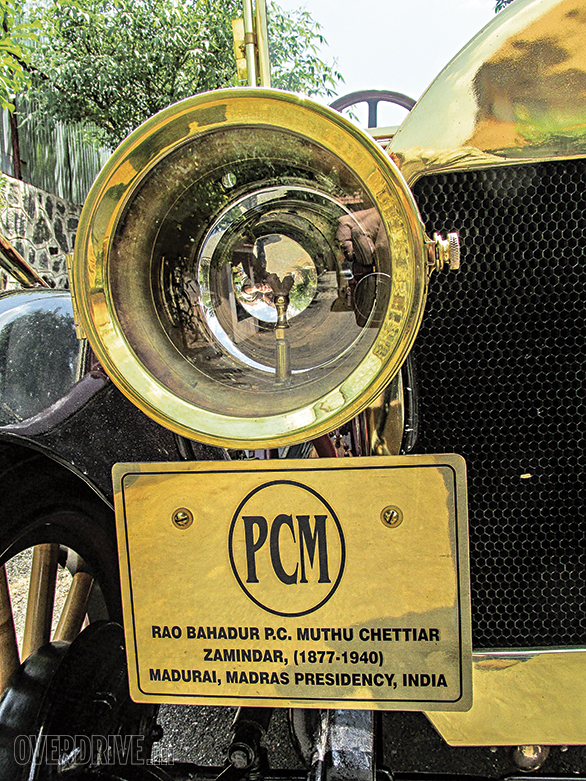 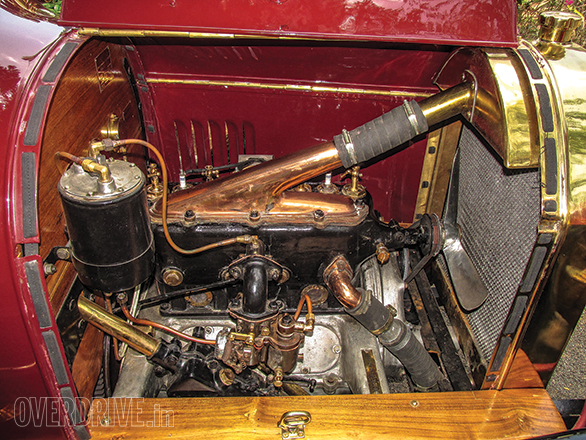 CS Ananth who has restored over 50 cars says, "The car came to us in January 2014. We made a list of the parts that we needed to source, and I began doing extensive research on Benz cars produced between 1912 and 1914. The actual restoration began after six months because it took that long to research. The wooden wheels were manufactured for us by UMS Technologies Ltd, Coimbatore. Most of the body parts including the brass items were hand made by us. The engine was completely rebuilt since it had not run for 55 years. The transmission and brakes were overhauled. The honey comb radiator core and magneto were imported from New Zealand. All the floor aluminium panels were made. The brass radiator housing was also made and the painting and upholstery done. Close to 25,000 man-hours was spent in restoring this car." 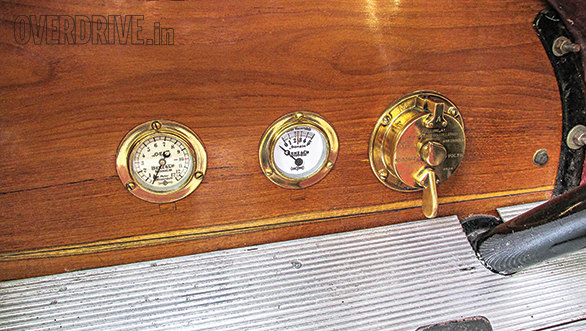 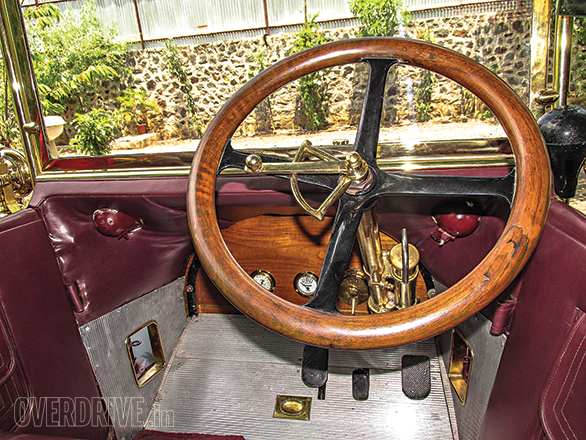 This Benz is apparently the oldest recorded Mercedes-Benz in India and one of only four in existence worldwide. On September 24, Roland Folger, MD and CEO, Mercedes-Benz India, unveiled the restored Benz at the very impressive Titanium Motors showroom in Chennai. An ideal venue because it's housed in a 1916 Indo-Saracenic style heritage building situated on Mount Road. The next day I got to experience the car, and while photographing it, I realised this is a car you just cannot shoot in the sun. Simply because all the brass on it produces prominent reflections. Actually, a car like this that started what was popularly known as 'Brass Era' cars. Given its age, the car runs fairly well and CS Ananth deserves to be complimented for this. As it's now restored, this Benz 8/20 HP has been invited to participate in the prestigious 'entry only by invitation' Cartier Concours d' Elegance event that will be held in Hyderabad in February 2017. I think CS Ananth will need to do a lot more work and detailing to bring it up to the standard expected of Cartier event cars. The attention to detail and overall finishing certainly need to be improved upon, and since there is still some time to go for the event, I hope CS Ananth and the owners go the extra mile to enhance the restoration of this historic Benz.