Then and now: When ACs were not common in cars

We, at OVERDRIVE, have been on a quest to find 'India's Coolest Car' and have tested over two dozens to determine whose air conditioners are the most efficient. Obviously, all these cars have factory-fitted air conditioners. In fact, now it's rare to find an automobile sold in India without a factory-fitted AC. But this was not always the case. A few decades back, things were different, very different. 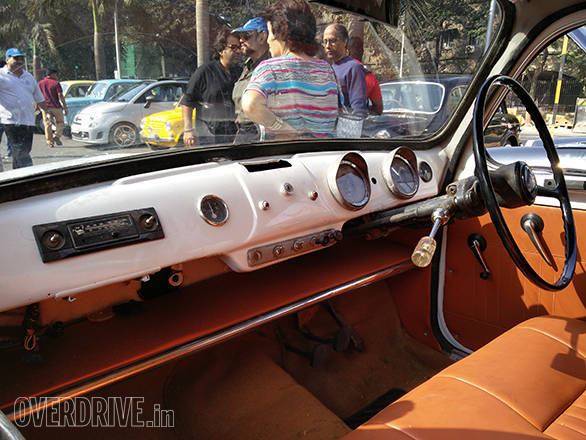 Right up to the mid-80s, manufacturers in India did not provide cars with air conditioners. These were found only on imported cars, which were extremely expensive and not too common. So what did the guys who purchased Fiats or Ambassadors do. Back then also, our country's 'jugaad' had its own way of finding solutions.

Come summer and you would find the markets flooded with khus-khus tatties, or dried grass mats. Khus-khus is basically an aromatic perennial Indian grass, whose roots were woven into mats, hand fans, baskets, etc. I believe in some interior parts of India, poor people still use khus-khus tatties to stay cool in summer. In rural India, locally made air coolers also have khus-khus mats that are kept moist to enable the cooler to blow out cool air.

Khus-khus tatties were tied on the roofs of cars before setting out on any journey. Image source: pazyathu.blogspot.com

Motorists would buy these khus-khus tatties and tie them on the roofs of their cars. Before setting out on any journey, they would pour water over these grass mats, and as a result the roof of the car would cool down and drop temperatures inside the passenger compartment by about 10°C or more. The evaporation of the water from the mat would further cool the metal surface of the roof due to the scientific phenomenon called 'evaporative cooling'. If you were out for a long drive, you pulled into a petrol pump every couple of hours and the attendant happily poured water over the khus-khus tattie and got a little 'baksheesh' or tip.

I remember a trip I made in summer in the early '80s to the Melghat Wildlife Sanctuary. Before starting out I purchased not one but two khus-khus tatties from Crawford Market. These I placed on top of the roof of my Fiat and used coir rope to fasten them. Temperatures in that region of Central India in May easily touch 45°C. But by keeping the khus-khus tatties wet, we were able to travel to Melghat in relative comfort. Ironically, that year the monsoons arrived early and on the return journey the same khus-khus tatties became a cause for discomfort, because in the incessant rain they made the passenger compartment unbearably cold.

From what I have read, the khus-khus tattie was used extensively as an indigenous cooling device by the British. During their 'Raj' over India, the one thing they feared most was our summers. The sahibs installed khus-khus tatties over all the openings in their homes like the windows and doors. A 'bhishtee' or water carrier would be then entrusted the task of regularly throwing water from the outside on these khus-khus tatties. This was very effective in cooling when winds, hot or cool, blew. The rapid evaporation of sprinkled water and the refreshing odour of khus-khus made the inner spaces both cool and comfortable. It is believed the use of such tatties was also prevalent during the Mughal times, and the invention of this device is attributed to the Mughal emperor Akbar.

Most cars would have an oscillating fan mounted on the inside of the B-pillars. Image source: www.globalsources.com

One of the most popular car accessories in India in the '60s, '70s, '80s and even '90s was the oscillating car fan. Most cars would have one mounted on top of the dashboard. Government-owned vehicles usually had two fans, with one each being fitted on the inside of the B-pillars. You can still see them in some of the sarkari Ambassadors. I believe these fans were approved as standard accessories for government vehicles and a budget was created for them. This budget must still exist, only it goes unutilised now. Actually, given the way our government functions, it would not be surprising if someone is still making use of this budget. Strangely, in this day and age when almost all cars come equipped with ACs, you still find car fans being sold, even on Amazon!

In the days when manufacturers did not sell air-conditioned cars, a small-scale industry emerged to retrofit cars with air conditioners. In fact, several of these AC retro-fitters are still around. The only difference being they now mainly do repairing and servicing of car air conditioners.

The industry of AC retro-fitters was very well organised and fairly professional. In the car, they would fit an AC evaporator-cum-blower with a built-in cooling coil. An AC condenser and compressor would be installed. There were specialists who just fabricated condenser brackets and engine pulleys depending on the make and model of the car and the AC components. The quality of the bracketing contributed a lot to the NVH and reliability. Fitting an AC also meant an increase in load on the engine and a substantial increase in engine operating temperature. The heat within the engine compartment also increased. To deal with this, larger radiators were fitted. The engine fan blades were replaced with a bigger one.

Very often to compensate for the larger size and increase in number of blades, these fan blades were moulded from plastic. Later auxiliary electric fans became available and these were also fitted in front of radiators to improve the engine cooling. You also had to install an FICD (Fast Idling Carburetor Device) that increased the engine idling speed when the AC was switched on. This was done to manage the increase in load on the engine and prevent it from stalling. As the engines were low on power, you also fitted a kick-down switch to the AC system. So when you wanted to overtake and floored the accelerator, the kick-down switch would momentarily disconnect the AC compressor which reduced load on the engine and made passing another vehicle easier. Of course, if you had to climb a steep hill or ghat, it meant you had to keep the AC off!

You might imagine that back then when you purchased a car, one of the first things you did was take if for retro-fitment of an AC. Well, however, much you wanted to, you needed to wait till the engine was run-in and had gone through its mandatory first oil change. Some people choose to be more cautious and would not fit an AC until their car had covered a couple of thousand kilometres. Some retro-fitters were more known than others, and the bracketing, hoses, connectors, etc. of some manufacturers were preferred. If I am not mistaken, the most popular AC compressor was the Sanden SD 507 and it was best combined with a Superking evaporator.

Besides the existing fan, an auxiliary electric fan was fitted onto the radiator to improve engine cooling

When Maruti started making and selling cars in India towards end of 1983, the Maruti 800 (SS 80) came fitted with only a blower. Later in 1984, they introduced an AC/TG model which was basically an 800 with an air conditioner and tinted glasses. With this, Maruti became the first Indian car manufacturer to provide a car with a factory-fitted AC. As mentioned earlier, now an air conditioner is a feature that is taken for granted in a car. The times, how they have changed.

Also from OVERDRIVE on ACs in Indian automobiles:

Hyundai i20 Active's AC is best among Indian hatchbacks!