The average human heart beats at roughly 60-100 beats per minute when he or she is relaxed. Excitement, nervousness, or fright usually bumps this figure up. My heart rate was somewhere in that region, elevated that is, as I was waiting on the grid for the first-ever motorcycle race of my life to get underway.

You see, I've always loved watching races, whether on television or from behind the safety of a barrier on a racetrack. I used to imagine what it would be like to race a motorcycle and I'd picture myself racing hard, side by side with other racers, and even winning a race or two. There, however, are a couple of issues that make it hard for this dream of mine to turn into reality. 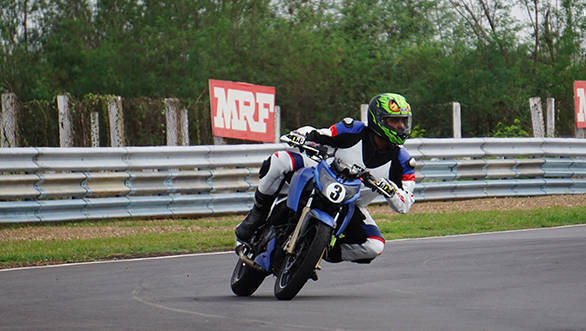 First, I do not have much track riding experience, when compared to my media friends on the grid. Second, my ignorance with regard to my eating habits had made me the heaviest rider of the lot. And my fitness levels are nowhere near that of the professional racers in the national-level championships. All of this should give you a fair idea about why my heart was pounding on the grid. The series of events that unfolded after the lights went out, though, have been nothing short of life changing.

A day before the race is when the practice and qualifying sessions are held. I was slightly nervous, as practice began. This, after all, was my first time, riding around the full MMRT racetrack. For the first couple of laps, I decided to go slow and try to understand the layout, and pick up reference points for turning and braking. Ask anyone who has been to the MMRT, and they'll tell you that finding the optimal line around the second bowl is one of the trickiest puzzles. That corner alone was proving to be quite a challenge for me during the weekend. 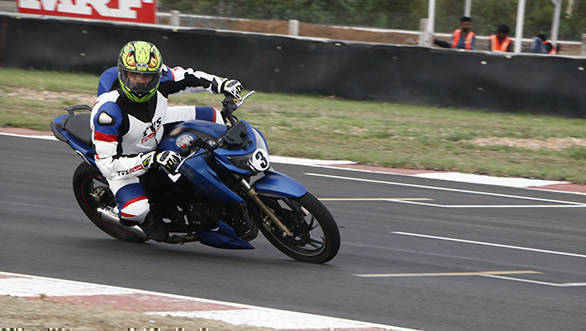 Then it was Corner 10, where you need to brake hard and deep for a tight left hander. Getting those two corners right was proving to be a lot more difficult than umm solving a math puzzle, a subject I hated all my life. That said, the best thing about riding on a racetrack is that you learn with each lap, and that turned out to be the case with me too. Slowly, my confidence grew as I began to improve my lines around the track, which in turn bumped up my pace. This was crucial as qualifying was next.

The race for grid position

Grid position has, more often than not, decided the outcome of a race. It's for this very reason why qualifying is, in my view, a race in itself as you try to beat the ticking clock. To the layman, a second may mean nothing, but those who race know the difference a thousandth-of-a-second can make.

This time, I decided to push from the very beginning. I felt fresh after the break between practice and qualifying, so it was easier to ride at a faster pace. The other reason was because heavy rain clouds had gathered over the racetrack, so making the best of the track while it remained dry was imperative. 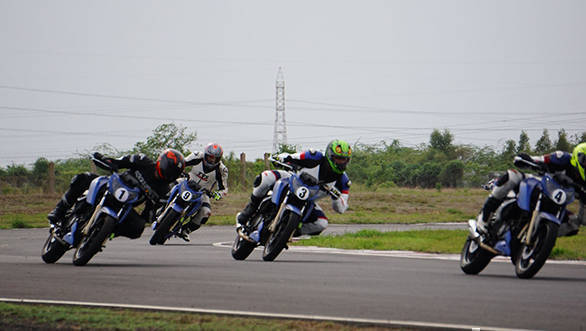 While the first couple of laps were super smooth, the rest of the laps were my worst ever. I was making mistakes around the long bowl as well as at the braking point for C10. I was also struggling to late apex the corner before the start-finish straight, which in turn was affecting the speed I could achieve down the straight. All of these small mistakes aggregated to add seconds to my overall lap time. I was bitterly disappointed with my session and imagined that I had the worst possible grid position  last. Thankfully, it wasn't as bad as it seemed. I qualified at P7 out of a grid of 10.

That night at the hotel, over dinner, we sat down to discuss the sessions and what lines the faster riders were sticking to. I kept thinking about how I could improve. Maybe it was also the butterflies in my stomach that were making me overthink things. Somehow, I managed to go to sleep. After all, being a sleepyhead at the races was the last thing that I needed!

Excitement was the word that underlined the way I felt that morning. On the way to the track I closed my eyes and began drawing a map of the track in my head. I've been told that racers know a track like the back of their hands, which is key to quick lap times. By the time I was done, we had reached the track. 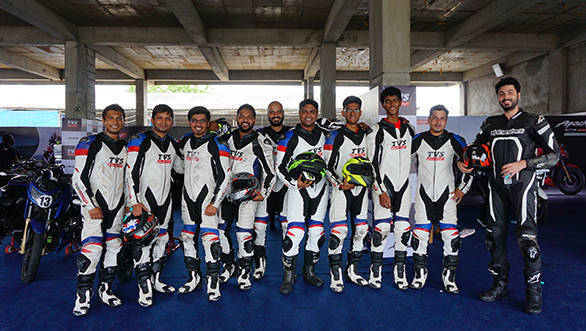 I spent the rest of the time watching the others race. The riders in the Super Sports and Pro Stock categories, for instance, were blazing quick, and it was quite a learning experience, watching them ride. And then, it was time to suit up and get on the Apache, because it was time to race. The next few minutes were a blur as we changed into our leathers and performed final checks to ensure the bikes were properly set up. As I rode out of the pits and onto the track, I made one final mental note of the braking and turn-in markers, and took a good look at how I'd approach the long bowl.

As I rolled onto the grid, it was quite a surreal moment for me. I always wondered what it'd feel like to sit on the grid and stare down the start lights. After a few photo ops, the grid was clear. Remember about my heart rate at the start of this story? I tried to breathe slowly to keep myself calm, and then the lights came on.

And we were racing!

As soon as the lights went off, I made a cautious start. The bite point of the clutch, on the race-spec TVS Apache RTR 200, arrives almost when you are about to release the clutch completely. So, it's quite easy to wheelie or worse, stall it on the grid. Keeping that in mind, I decided to take it easy at the start. It was not a good strategy though, because the guys behind me made a better start and passed me, going into Turn 1. 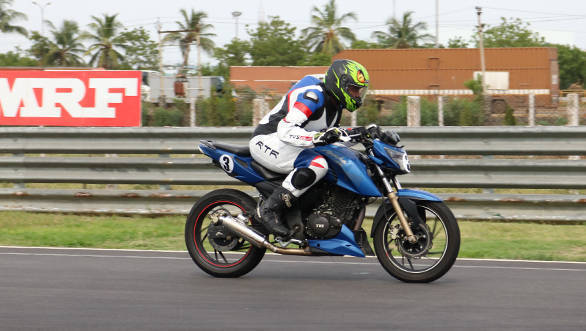 I, however, was determined to strike back and managed to grab one position at the exit of Turn 2. The next turn arrives quite quickly and I outbraked and passed another guy before it. After this corner, it's pretty much a straight line to the next left hander. My weight, again, was hampering my straight-line speed, but I managed to brake super late and avoid being passed by the guys behind.

I got a pretty good exit after the first bowl which helped me carry the momentum along the long bowl. All that mental mapping bore fruit as I got a clean exit out of that corner which helped me gain on the guy ahead. The next corner is a mild left that can be taken flat out in fifth, and I had the guy in front of me within sniffing distance. I passed him on the outside and got ahead of him, before the next right hander. Everything was going well until that point, and then as I braked hard, I could hear the guy behind come in hot. As I turned right, I could see in my peripheral vision that the guy behind would not make it through the corner, and instead was coming straight at me. We somehow managed to avoid contact, but in the process, I had to go off-track. The guy behind was also sucked into the grass patch.

I kept the throttle slightly open, and managed to stay on the bike. I rejoined carefully, but the off-track excursion pushed me down by a couple of places. I didn't let that affect me, or maybe it was the adrenaline, but I quickly got down to chasing the pack.

A couple of corners later, I was hot on the tail of another competitor and managed to slip past him before the right hander before the bridge. Coming down the final corner, before the start-finish straight, I braked a little too early (I still haven't figured out the best line through that corner). That resulted in me apexing a bit too early, and I ran a bit wide at the exit.

The guy behind me, however, had greater speed at the exit and he was on the inside line. But his speed was a little too much and he ran wide. The front wheel of his bike clipped the rear wheel of mine. Unfortunately, he slipped and fell off, and in the mayhem, I was pushed onto the little patch of grass on the outside of the corner. Luckily, the front end did not wash out and I managed to rejoin, this time losing one place.

I shook it off and began chasing the guy who had just got past me. By C3, I overtook him and from then on, I focused on maintaining a consistent line around the track, while attempting to improve my pace. For the next couple of laps, I was all by myself. The first lap skirmish resulted in the lead group pulling out a sizeable lead, and by the last lap, I knew they were too far ahead. 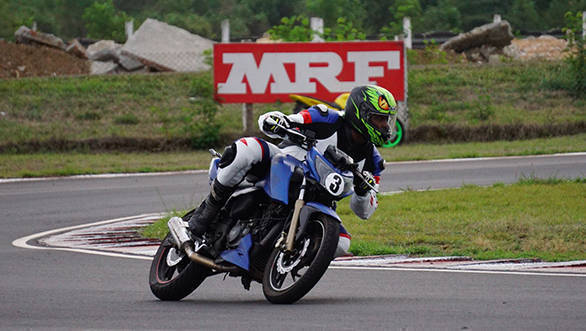 In my mind, all I wanted to do now was to finish the race. I didn't back off but at the same time ensured that I didn't make any silly mistakes. Leaning into the final corner, I saw the chequered flag wave, and I must say the feeling of completing your first race is surreal. I was smiling under my helmet, happy that I had unlocked another achievement in my nascent career as an auto journalist, even if it was only a sixth-place finish.

Racing is such a rush, you have to experience it to understand it. I have never felt so alive in my entire life. Those five laps will always remain special. It was a time when I had no other world worries bothering me. It was just me, a lovely motorcycle and the racetrack, and I enjoyed it to the core. So much so that I want more of it. As I type this story, the memories keep flooding my head, like they've been doing over the last couple of nights. Lying on my bed, I relive the race and those sensations that I felt. 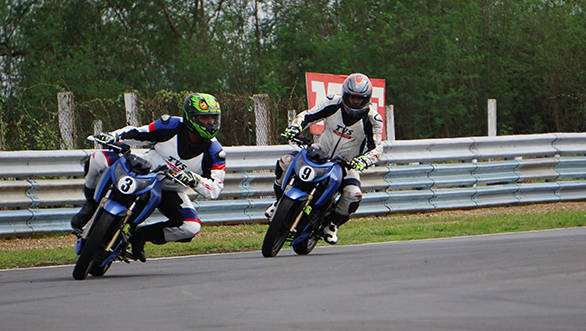 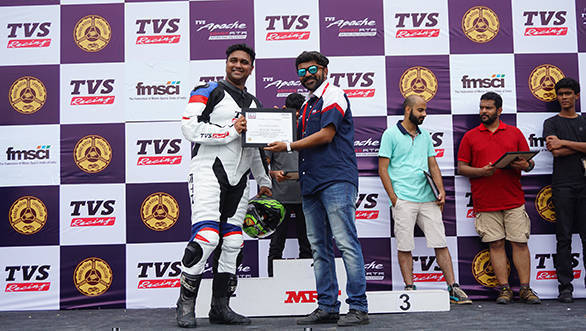 Call it an addiction if you will, but now that I've tasted what it's like to race a motorcycle, I wish for more opportunities. A big thank you is in order for TVS Racing for introducing me to something that was only a dream. Until now.