40 days into the New Year I've seen more airports, aircraft, lounges and hotels than most people see in a whole year. I've flown once around the globe within a span of 20 days, stayed on three continents, changed a dozen time zones and seen the weather changes from sub-zero to muggy, grimy and hot. I've cheered some of the greatest sportsmen on the planet, dined with some of the most powerful gears of the automotive industry and still found enough time to spend a weekend trudging through a mall in Mumbai - wife, kids and shopping bags in tow! I've consumed some of the best coffee in the world right at the source, same with the meats. I've even braved some of the most experiential food I've ever tried at the hands of a chef who is more of an artist than a cook and runs this place called Fäviken. I've shared my ideas for a future and seen ideas that will materialise in the future. But, in all these 40 days, I hadn't driven anything, or at least nothing new, even though I'd been privy to several new cars for 2017. 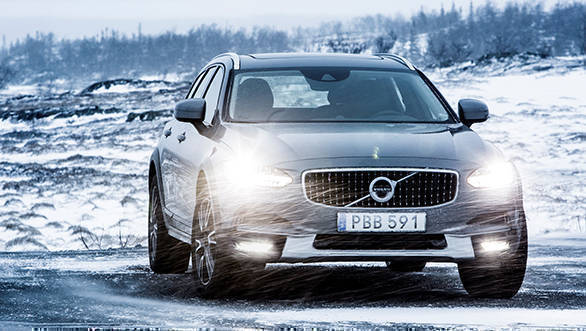 Until now. I'm warming my toes in front of a fire at a stunning ski resort in north of Stockholm, in a town called Åre. Outside, the weather is cold enough to put icicles under my nose if I step outside the doors to the hotel. It isn't easy swapping the warm, cosy confines of the resort, and even though I'm putting up a brave front, I can feel body parts turning blue as I step past the resort doors and walk to the doors of the Volvo V90 Cross Country. Is this weather and hostility from the weather gods a must for the V90 Cross Country, absolutely not! But then for a car that appears as cool as it is, this is one of the coolest settings to bring it to. 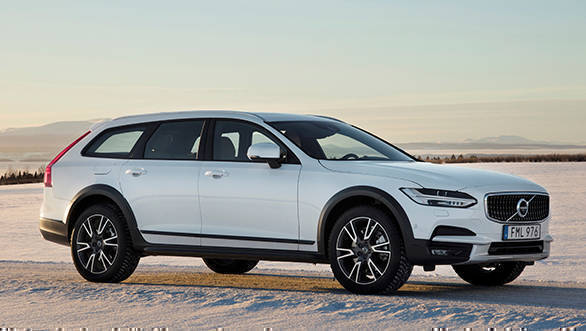 The Volvo V90 Cross Country is part of Volvo's Scalable Product Architecture (SPA), a vehicle platform that allows them to build various body styles on minimum platforms for higher manufacturing efficiencies and lower costs. It also means Volvo can focus more on developing technologies, safety systems and body style designs since the chassis can now be used by a variety of combinations. The V90 Cross Country is the fourth in a line of vehicles that started off with the XC90, which was then followed up by the S90 luxury sedan and then the V90 estate. Now Volvo has raised the V90 estate, giving it higher ground clearance, the patina of an SUV and slipping in the 4x4 drivetrain from the XC90. Voila, what you get is a mid-size crossover that looks rugged weathering the ice and snow of Sweden with the practicality and space of an estate. India isn't exactly welcoming to the estate body style, so the V90 by itself would not have made much sense, but in the V90 Cross Country they have a vehicle that is certain to spark enough curiosity and interest to keep the cash registers ringing. 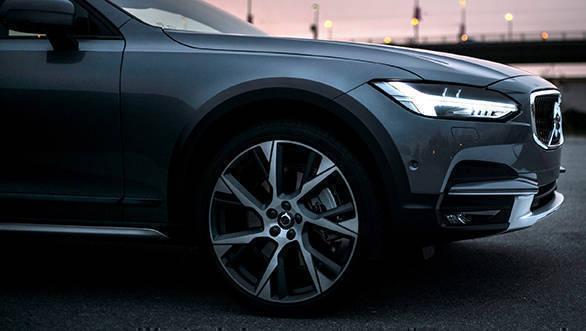 Like any other Volvos from the last two years, the V90 Cross Country is smooth, refined and luxurious. Volvo in 2014 decided to limit the number of engines it offered to consumers, choosing to keep things more value based. So they decided to offer only 4-cylinder engines - petrol, diesel, hybrid - in all their SPA products. Now the cars coming to India will only be available in diesel, which is the D5 spec. It's a 2.0-litre in-line 4-cylinder diesel motor with a twin-turbo providing induction. This motor is efficient in all that it attempts to do; 235PS and 480Nm of torque gives it immense versatility for all conditions. For India, the V90 Cross Country will get the 8-speed automatic transmission which transmits torque to all four wheels. Now this isn't a full-time all-wheel-drive system; power is 100 per cent delivered to the front wheels, but as when required some of it can be deferred to the rear wheels. 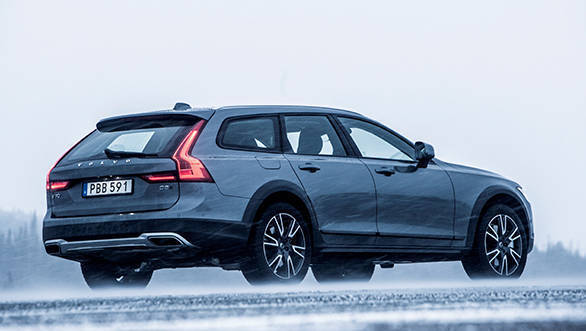 The D5 is not an aggressive motor, but it does pack in a decent punch which is best experienced when you drive it in performance mode. Throttle maps are altered, shift points come earlier and the V90 Cross Country sprints 0 to 100kmph in 7.5 seconds with a claimed top speed of 230kmph. Ideally though, the V90 which always defers to its normal mode when you twist the gorgeous starter button to bring life to its engine is the best mode to stay in. The cabin of the V90 Cross Country is well insulated from the elements and itself, so you just won't hear the diesel clatter at tick over or full clip inside the cabin. There is no sense of urgency with any of the new Volvos and rightfully so. This new breed of Volvo is built with some of Scandinavia's best design aesthetics, and the name of the game here is understated luxury, not power.

Is it value for money?

Volvo India has decided to keep its premium earnings low compared to any other manufacturers that offer imported cars in the premium luxury space in India. This means they have been able to undercut every other manufacturers in competing spaces by significant margins yet offering much better feature sets and luxury items within their cars. The V90 Cross Country will be no different. Volvo will offer it with the full luxury kit and all the convenience items you'd get in their top-trim level. It may also include certain radar-based safety functions in addition to a full complement of safety features. 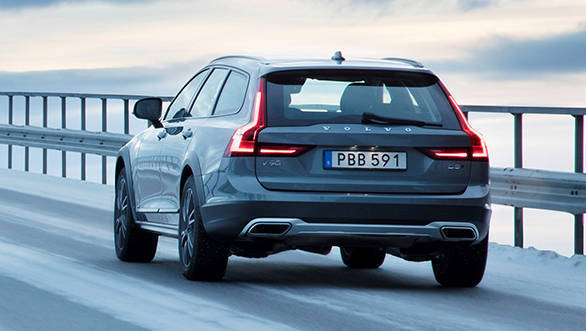 What the V90 Cross Country will also get is a new connected feature that uses a Volvo 'Cloud' to send or receive safety messages from other Volvos. So, for instance, if someone in their XC90 was driving south on NH1 and encountered heavy rain and slippery roads and you were a few kilometres behind in your V90 Cross Country driving down the same route, the XC90 ahead would send a message to your V90 Cross Country that the road ahead was slippery. As of now this application works only on the new SPA range of vehicles, and earlier adopters of the XC90, for instance, can go to a workshop and update their systems to acquire this feature.

Since the S90 is a sub-Rs 60 lakh (ex-showroom) car, I'm expecting the V90 Cross Country to be offered somewhere between Rs 60-65 lakh. It's a reasonable bargain for a stylish luxury crossover though the lack of seven seats in a vehicle this long may be seen as a bit of a disadvantage by some.

What are we doing on ice? 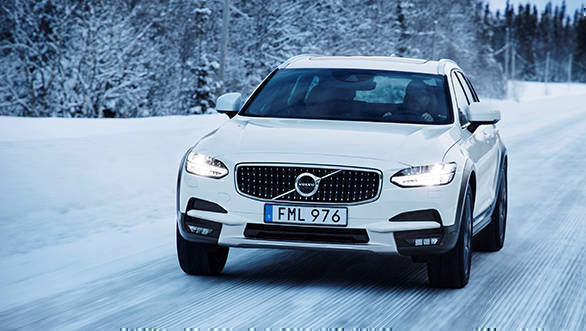 Åre is a ski resort; temperatures hover through the day at around 13°C below zero which means most of the lakes around these parts are frozen over. Does that help give a unique perspective to the V90 Cross Country? Actually not! This is just purely fun but it allows us to see what the dynamics of the vehicle will allow us to do in extremely slippery conditions.

This involves both the steering and the new suspension and the way they both complement each other. On the highways the suspension is plush; you barely notice a thing. The cars we drove had a standard suspension set-up but cars that will be offered to consumers in India will come with the air suspension. This is not an adaptive suspension system and you cannot alter the ride height, but what it does is maintains the 210mm ground clearance at all times, irrespective of the terrain conditions or the load in the car. 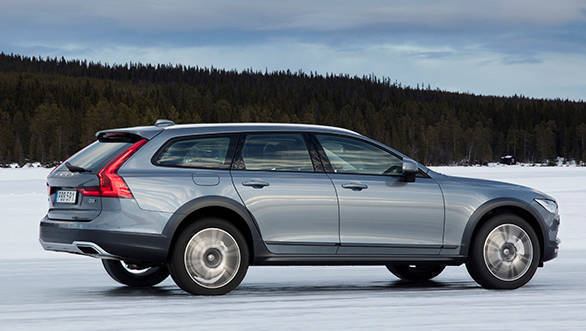 There is some body roll and pitch. Overall though, the chassis and suspension is stiff enough to keep you planted securely and give you enough confidence in the toughest conditions. However, we would need to drive the India-spec cars to get a better idea of just how the air suspension package works in our conditions.

On the ice, we drove the V90 Cross Country in a variety of modes, trying out almost everything from the Comfort mode to the Dynamic mode, with the traction control on and off. Comfort mode is definitely not the best for the conditions we drove in because the steering feels too loose and the power delivery isn't as urgent as you would like it to be. It's fantastic for urban conditions, especially in our metros where the lightness reduces fatigue. In Dynamic, the steering gets a bit more weight and directness and instead of being jerky is considerably more linear. However, Dynamic mode also alters the throttle characteristics and that means power delivery is bit more urgent. This is where driver control comes in, in a big way. Slightly feathering the throttle delivers outstanding results, you can smoothly make the transitions from corner to corner without spinning out. The chassis feels well balanced here; the slippery surfaces that result in a lot of pendulum motion brings out all the character of the chassis and it definitely feels very effective. 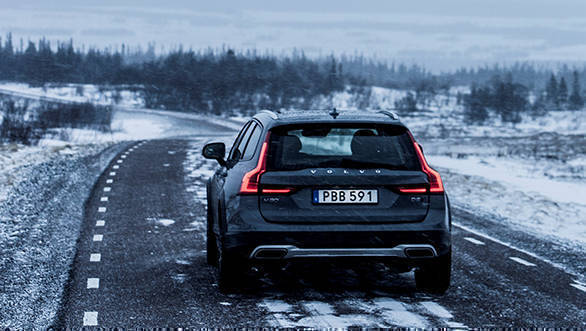 One shortcoming in the diesel was the lack of paddle shifters behind the steering wheel. This would have added a large dollop of control on that icy surface but sadly that feature is lacking. Nonetheless, for most conditions, you will never have to get past the automatic mode and into manual at all.

What does India get then?

To sum it up, the V90 Cross Country comes with a pretty cool exterior; the slightly reworked ornamentation compared to the V90 or the S90 make it stand out handsomely. The plastic cladding on the fenders, side sills and the reworked front bumper add tremendous volume to its stance. It anyways sits high on the taller suspension, and with those tasty six petal alloys the V90 Cross Country has tremendous presence. 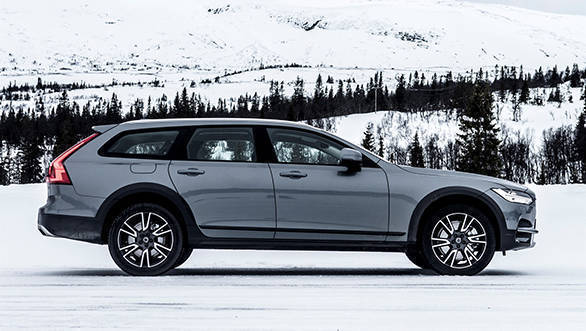 Then there is the interior package consisting of those stunning Swedish minimalist design elements. I simply love how Volvo has transformed itself and the interior trim is a testimony to the brilliance of Scandinavian design. It's all a bit IKEA-ish but less than a handful of buttons, clean lines, soft touch leather and the tempered aluminium inserts make it the most brilliant cabin to be in. Space is another huge attraction; there is generous space for passengers but a huge 600-plus litre boot that goes up to 1,500 litres by folding the rear seats down gives it immense practicality.

The diesel engine is competent, torquey and smooth. The 8-speed transmission is slick and there is a host of safety and comfort features that tick almost every box in any wish list. Indian consumers will get the top-of-the-line version (Inscription), with customisable options especially in the interior trim. And last of all is the price - at an expected Rs 60-65 lakh, the V90 Cross Country is a steal. So despite having started off late, the Volvo V90 Cross Country definitely has been a fantastic car to open my 'driven this year' account for 2017 then!