Motocross, cross-country rallying, and dirt track events are forms of off-road motor racing that the Indian biker community is familiar with. But Enduro racing that combines various off-roading disciplines together? That's a first! 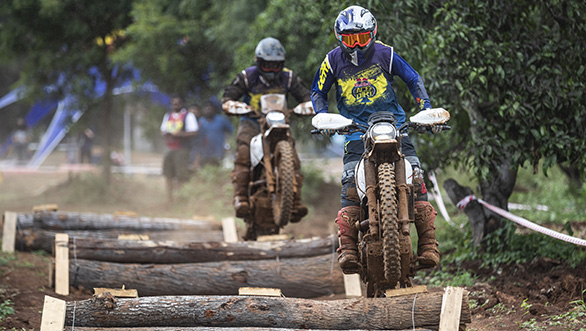 This inaugural event was the fruit of a collaboration between Red Bull India, Hero Motosports and Santosh himself, run under the aegis of the FMSCI and the KMSC. This first edition was invite-based only, with 32 professional off-road riders coming together to navigate a track that was riddled with multiple man-made obstacles that the riders had never tackled in a racing scenario earlier. The track was designed by Santosh, who had this to say, "We used a bit of creativity and lot of influence from the races that have been happening around the world. We've tried to make obstacles that are fun but not too difficult because we have to take into consideration the guys have never raced a course like this and the motorcycles also have a huge limitation because it's a standard bike that you can buy from a showroom, it's a commuter bike. So all these guys are using commuter bikes to compete in an event like this." Keeping this in mind, the team had built a few bridges, added wooden logs, tyre mines, seesaws, and a gravity cavity which basically is a huge hole in which the riders go in and come out. "We also have this obstacle called the mud pie which is really exciting for me because all the guys need to go through a patch of water which was rather chocolatey so it's very difficult to manoeuvre this," he added.

The day started with qualifiers for all 32 riders, and based on the results they were slotted in groups of four for the first heat race of the day. Only the top two from each of the eight groups in total would make it to the semi-final round. With a high level of anticipation and excitement, the riders set off on their own stock bikes to tackle the various obstacles as quickly and carefully as they could. Mind you this was a course designed to test the ultimate grit of both man and machine! One wrong move and the machine would fall apart taking the rider's hope of training with India's first Dakar rally rider along with it. 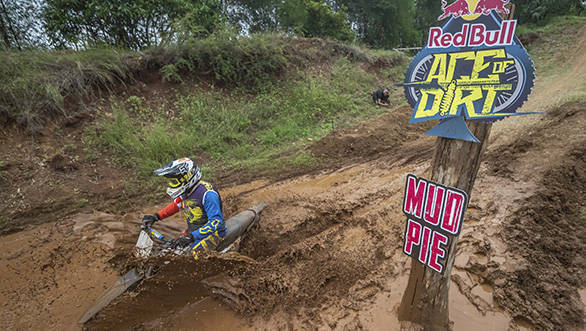 Santosh added some perspective about the skill set required to do well in the event. "The race is not about corner speed or how fast you can go down a straight, which means in racing basically horsepower is expensive so any track bike or track car is exponentially more expensive than a dirt bike because with dirt bikes, horsepower is not the most important thing. On a track like this, it is important to understand the limitations you have with the motorcycle and have a sound technique to get over obstacles," he said, defining the key point that would separate the good from the great.

The fact that spectator assistance was allowed through some of the zones, it gave spectators a chance to feel like they were a part of the race. Which increased fan engagement with the event in a rather direct manner. A fact that Santosh was not unaware of: "Also I think that in some of these zones spectators can actually help the guys to make it through the obstacles. So it is one of those events that the spectators can touch and feel and also contribute in terms of helping the athletes," he said.

Given this Enduro event was new to the riders, fatigue set in pretty soon. The need to be fast, at all times, appeared to get the best of many riders, while the measured yet fast riders were the ones who seemed to be steadily making their way into the semi-finals.

Yuva Kumar, a national level motocross rider from Bengaluru said, "Experience doesn't count in Enduro. We haven't ridden in this type of terrain before. Earlier we used to ride only motocross and dirt tracks and small Enduro tracks but this is the first time in my life I'm riding on a track like this. This terrain isn't one where you can ride fast everywhere, there are some places you can ride fast but at some points you have to use your brain. You can ease off and make smart moves. So if you're in a hurry you'll definitely crash. If you're slower, you'll be faster." 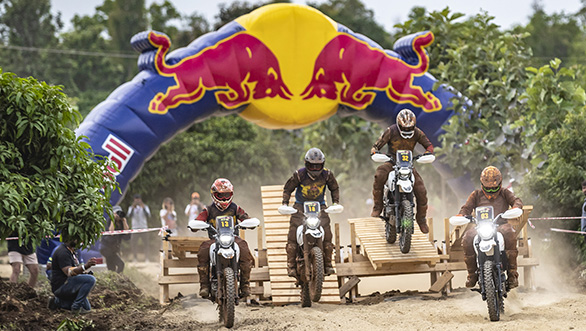 The tricky obstacle that Santosh had mentioned earlier - the Mud Pie - really challenged the riders. It was essentially a sharp drop into a water patch leading up to a steep hill climb. The water patch was particularly tricky, because it could result in water seeping into the electricals if the rider happened to go way too fast and full throttle across it.

Sanjay Kumar, another national level off-road rally rider from Bengaluru said, " We are rally riders and haven't experienced wooden logs and water patches, so this was a first-of-its-kind experience for us."

As the heat races wore on, many stock motorcycles broke down and the slower riders were eliminated. It was now time for the semi-finals where the eight riders would be competing on Hero Xpulse 200 motorcycles. 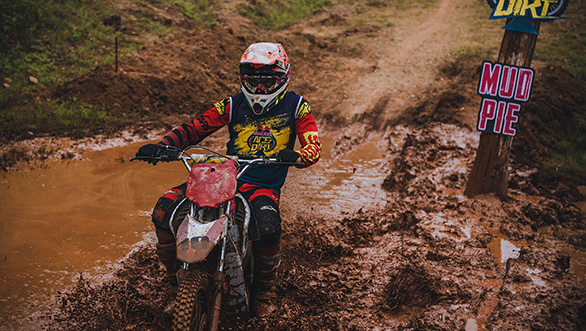 Santosh was clear that one of the reasons for this switch to standard bikes across the grid, was to level the playing field. "You see on the track some are using carburetted bikes, some have fuel injected bikes, some have larger travel, some smaller travel, some are heavier, some lighter so all of these play differently on different parts of the track. So when they switch to an Xpulse in semi-finals, everyone pretty much has the same bike, the same travel, the same horsepower and it's a capable machine. And since we neutralised the motorcycle then it's just the rider who is able to go out and do what he wants to do and not really think about the limitations of the motorcycle."

Once the semi-final was flagged off, the identical Xpulse 200 motorcycle riders were tested purely on their individual riding skills and the ability to read and tackle the obstacles in their unique riding styles. Through the course of all the action, Bengaluru's Yuva Kumar was quickly becoming the crowd favourite having fended off tough competition from Amal Varghese. If anyone could beat Yuva though, it was Naresh VS who seemed to be flying over the obstacles in the semi-final round. 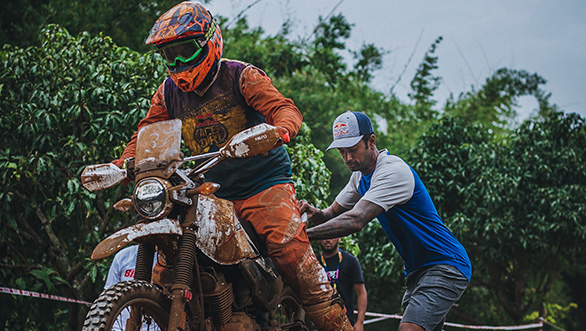 So finally after a hard day of battling the toughest competition on the roughest track, the four finalists ( Naresh VS, Yuva Kumar, A. Sathyaraj, Devaraj V Venkatesh) took to the start line for one last time to win the distinction of becoming the inaugural winner of Red Bull India's Ace of Dirt.

The final round was a total of four laps of the track, which was being led by Yuva Kumar right from the start, but it wasn't meant to be an easy win. Yuva was soon overtaken by Naresh VS who was leading the second lap comfortably until the cruel hand of fate intervened and his motorcycle started facing chain issues, robbing him of victory. This paved the way for Yuva to steadily inch towards a much-deserved victory, 13 seconds clear of Naresh who managed to complete the race in second position.

After the win, an elated Yuva Kumar said, "I still can't believe it, it's like a dream come true. I am thankful to Red Bull for creating platforms like these to help us unleash our potential. I am very excited to learn from my childhood idol, CS Santosh!" 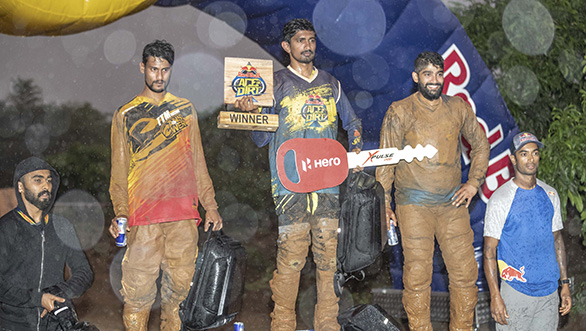 Speaking about the event himself, CS Santosh said, "The Federation is looking for different avenues where they can promote motorsports. With this, the pilot project all of us are talking about it and we have brought in the best people that we could find to compete with, and this in a way is going to see the idea across the nation that there is an event like this and then we showcase this event and give people an idea of what's in store for them if they do take part. Also being able to train with me, I'm going to be able to help them a lot because it's a new format of racing, I think with a few things here and there could definitely help them a long way."