The JK Tyre Xtreme 4Play off-roading competition was flagged off in Chandigarh during a ceremony on Friday evening. The event, considered one of the biggest off-roading competitions to be held in the north of the country, has seen as many as 15 top teams from across India sign up. The team to beat, however, will naturally be home heroes - Gerrari Off Roaders. 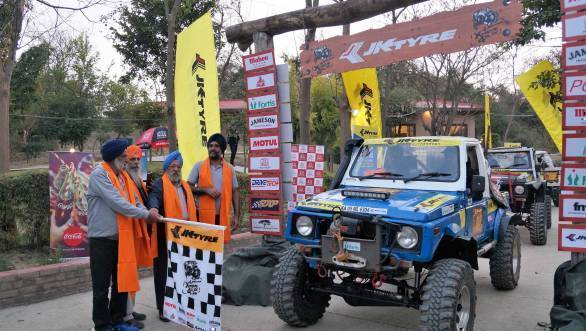 The two-day off-roading extravaganza will be held over seven-stages in Kikar Lodge, which is India's first private forest reserve, that extends over 1800 acres on the foothills of the Shivalik Mountains in Punjab. Each team in the event consists of two cars and four participants - two drivers and two co-drivers. Both cars in the team must complete a stage in order to qualify for points. The cars themselves are fully modified and feature rollcages, tuned engines, better suspension, and increased ground clearance, which in turn helps them tackle the obstacles on the stages. In the event that a car is stuck, the other car in the team needs to try and come to the rescue of their team-mates.

Gerrari Off Roaders has four teams in the event. Leading the outfit are Gurmeet Singh Virdi and Kirpal Singh Tung, who have the advantage of knowing the terrain fairly well. Kabir Waraich and Yuvraj Tiwana will also be a duo to watch out for. Other teams that are competing in the event include BODA from Bengaluru, MOCA from Arunachal Pradesh, Kerala Adventure Sports Club, and KTM Jeepers from Kerala, as well as MARS from Hyderabad.