Hyundai, as is their custom close to any launch from their end, are making quite the noise lately - what with all those tantalising leaked images, spy shots or details. This time it's a familiar car, the i20. Make no mistake though. This is the all-new i20 which the carmakers will be launching and thereafter in other markets in the world. Here are five things that we know about the car.

The 2015 Hyundai i20 bears little resemblance to the car it will replace. Gone are the rounded edges, instead of which Hyundai designers have chosen to go ahead with more pointed corners. This is the evolution of the Fluidic Design philosophy that the company prosaically calls 2.0. We saw this first in the Grand i10 last year and more recently in the Santa Fe and Xcent. The airdam is a wide piece and features a chrome outline. The bumper has sporty appendages while the fog lamps are wide units. The headlamps are also big and have inserts within them. Standard now for the i20 range are 15-inch wheels and there will be diamond cut 16-inch alloys on the top end variants. The ORVMs also have blinkers on them while the C-pillar in the spy images looks blacked out. Tail lamps are of the wraparound kind with the turn indicators done up in clear lens. The stop lamp is mounted higher up.

Like with the exteriors, Hyundai has spruced up the interiors of the car significantly. A three spoke steering wheel replaces the four spoke one in the current car. There is ambient blue backlighting for the switchgear. The steering wheel, like before, will have audio controls on it as well as the tripmeter settings. Push button start is expected to be standard on mid and top level variants. Creature comforts like automatic climate control and a touch screen music system with 2GB onboard storage will also be part of the features list. The cabin has also grown in size and we can expect more head and legroom. The new i20 will have a rear AC vent like the Grand i10. Boot space though remains the same as in the outgoing car. 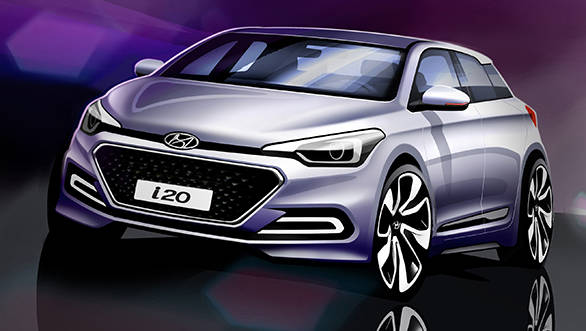 The first-gen i20 was a pioneer in terms of safety features. Ever heard of six airbags in a car which costs less than Rs 10 lakh on-road? Well, the i20 offered the same. The new i20 gets an adaptive steering parking assist, a sensor which unlocks the door on impact, ajar warning for all four doors, a reverse camera with parking sensors and of course, four airbags. 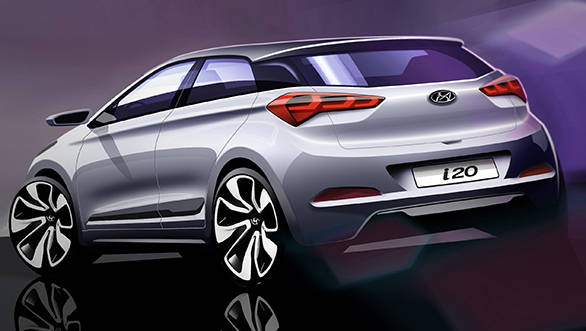 Hyundai has been fine tuning the i20's handling at the Nurburgring. The older i20's ride quality was quite satisfactory however the handling was often criticised for being soggy. With the launch of the new i20, we can expect Hyundai to have resolved this issue. There is also an 'N' version expected later. This will be the performance variant and is expected to run the 90PS diesel engine but with the works including bodykit.

The new i20 can be expected to come with the same engines that power the current gen car. However our sources say that the new i20's petrol and diesel engines will have a higher fuel efficiency as compared to that of its outgoing counterpart. There will be two petrols and one diesel engine with the former enjoying the convenience of a four-speed automatic transmission. Hyundai has added a 'smart pedal' which will cut off the fuel supply to the engine if both the accelerator and brake pedal are used simultaneously. Good news drivers as new as the car itself. And anyone else in their way.

We will be driving the new Elite i20 soon. Watch this space for more.