Flat out? We'd rather not!

"Let no one say that we didn't try and that we were scared. They can say anything that they like, but let them not say that we were scared. Let them instead say that we tried everything that was thrown our way," the man leans out of the jeep that he's driving and smiles at the marshal broadly, pumping his right fist in the air enthusiastically. You see, he's been attempting to get around a particularly tight bend on SS22 of the Rainforest Challenge India. The sort of challenge that requires winching, steering and mindwork aplenty on the part of the driver and the co-driver too. Unfortunately, though, he's only managed to register a DNF in this particular challenge, given that he's exceeded the allotted time of 15 minutes for that particular Special Stage. And despite the fact that he hasn't been able to finish the challenge, the spirit of what he says stays with me. Bruised and battered from the very many trials that are involved in competing in an off-road challenge as grueling as the RFC, but with a broad grin and spirit intact. 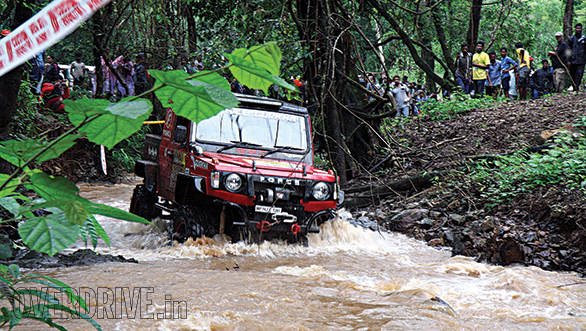 What particularly impresses me, as I'm standing there watching the jeep make it back down the hill, is the fact that this is one of the few teams that, until that point, attempted absolutely all the challenges that came their way. I'd been keeping a particularly keen eye on SS22 at the RFC. This, because from the time the stage went live the previous day, I'd seen several competitors come up to the bunting tape, start the stopwatch, begin the stage, and then back out of it slowly. Merely starting the stage and opting to DNF ensured them 20 points, something that these competitors were willing to settle for. The reasons they cited were very many. The first, and most obvious, was simply the fact that the stage was challenging to the extreme. Many competitors believed that they simply couldn't complete it within the stipulated time - a valid fear. But given that at least attempting the challenge, even if they did DNF, would give them those same 20 points, I'd have imagined that they'd all try their hands at it.

I watched another participant in a Gypsy come up to the bunting tape and sheepishly tell the marshal that he wanted to DNF. The marshal tried to reason with him a little - the Gypsy was smaller and lighter than several other machines that were attempting the same challenge and was thus likely to have an advantage over them. The response he got was "Well, I toppled my Gypsy yesterday. I have a wife and a five-year old daughter waiting for me back home. It's not a risk I want to take." As I'm watching him back out of the trail, I see a fully off-road prepped Toyota motoring along the trail below. In it is Aida, the lady they call the 4x4 Offroad Princess, mother of five children and off-roader par excellence. And the only reason she isn't competing in the event is because her vehicle was stuck in customs and only reached two days after the event had already started. And she's busy climbing over all sorts of obstacles, nary a care in the world, five children and all.

Yet another competitor declares that he's invested so much money in preparing his machine, that he has no intention of letting it roll down an incline and get damaged. It's simply not worth throwing that sort of money away, you see? But that was money that he'd invested in preparing his machine. To go off-roading. In the most challenging event of its kind in the country. And then he chose not to. I'm confounded.

Then, the next day, I hear of how the entire RFC contingent chose not to finish the Twilight leg, because it was, apparently too challenging. I find it somewhat hard to believe that the Malaysians, including a four-time RFC Malaysia winner, chose not to do the challenge. From what I can tell, even though the RFC India has stages that are unlike anything our homegrown offroaders have encountered, compared to the stages at the mother event in Malaysia, these are a piece of cake, or mud pie, if you will. The course director, David Metcalfe says two very pertinent things to me. The first is that the Malaysians played strategy. Given that they knew that none of the other competitors were keen on attempting this challenge that involved scaling sideways a steep section of rock, they'd be able to win the rally in any case. They didn't balk at the challenge, they just chose not to do it because no one else was. The other, is that perhaps if the Twilight leg had been held at night the Indian offroaders would have attempted it. "They wouldn't have been able to see the danger involved in the dark, perhaps," Metcalfe laughs.

Then there's the fact that India has aspirations aplenty. We wanted to be involved in Formula 1. We want to someday get MotoGP to India. We are hoping for a round of the Asia Pacific Rally Championship in the country sometime soon. And we certainly are pleased as punch to have the RFC in the country. And we even want to compete in the RFC. But, then, as it usually happens with all these sports. We appear to like the idea of it, but perhaps not the hard work involved in actually seeing things through. I'm sure there were competitors who went home to tom-tom the fact that they finished in XYZ position, without admitting that the bulk of the points they got, was by cleverly DNFing.

Well, I'm not trying to paint the entire lot of competitors at the RFC with the same muddy brush. However, what bothered me, was the fact that the "Let no one say that we didn't try and that we were scared" spirit seemed to have faltered all through the event. And then failed entirely at one point. I thought I was meant to be watching were the best off-roaders in the country proving their mettle against the very best in the world. Which meant that though the RFC was awe inspiring in terms of the scale of event, it was also disappointing in terms of the attitude to the event itself. Hats off to the teams that tried hard all through - I know no amount of training could get me up those inclines.

Even so, there's hope for a better future. Now that participants know what the event truly is like, we can expect them to be better prepared for the next edition. In mind, metal and spirit too, I hope!