If you envy not getting the 1.0-litre EcoBoost engine in the new Fiesta like UK does, this news is going to annoy you even more. The new pair of Fiesta twins Zetec S Red and Black Edition in the UK comes with an even more powerful tune of the 1.0-litre engine. This golden goose produces 140PS which is more power per litre than the Bugatti Veyron and the Ferrari 458 Speciale! The 0-100 time is claimed to be nine seconds and the top speed is 200kph. And yet this engine manages 26.8kmpl (official figure for UK) and 104 CO2/km emissions. 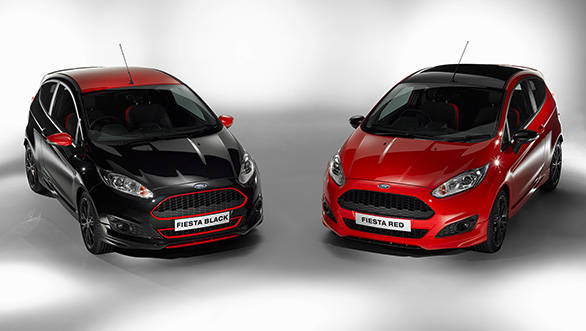 Before you turn into a rebel, you should also know about the styling changes that makes the Fiesta look so good. The three-door models get contrasting coloured roof, mirror caps and grille surrounds. There is also a body kit which includes lower bumpers and skirts and a rear spoiler. The 17-inch alloys are finished in black. On the inside the new model has leather steering and gear lever with red stitching on the latter. Plus, there are charcoal black sport seats with red stitching.

John McLoed, Ford's European vehicle personalisation chief designer said, "The more provocative car is the Black Edition- its red detailing and the grille surround deliver a high contrast for drivers that want to be noticed. The Red Edition car is highly expressive yet a little more subtle for the less exuberant owner." 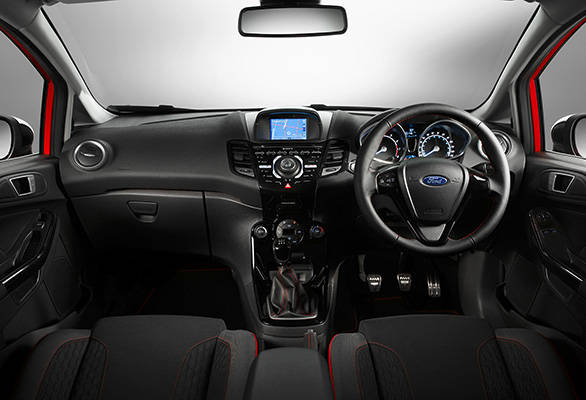 More power from the same engine has been achieved by calibrating the boost control on the turbocharger, valve-timing, intercooler and throttle. The new engine produces more than twice the power per litre compared to the old 1.6-litre 100PS engine. Even the gear ratio and the suspension settings have been revised for the special version. It has a stiffer rear axle and revised steering settings for better feedback.

Ford, please bring this engine to India. Remember, most Ford enthusiasts have seen the Spartans; both of them.

Available to order now and in dealerships from September, the Fiesta Zetec S Red / Black Editions will be the most powerful 1.0-litre volume production cars ever.  The new 140PS version of the 1.0-litre EcoBoost offers more power per litre than the Bugatti Veyron and the Ferrari 458 Speciale.

"These two new Fiestas make an unquestionably bold statement on the road and will give drivers an equally distinctive experience behind the wheel with a sportier version of our 1.0-litre EcoBoost and enhancements to the Fiesta's acclaimed ride and handling," said Roelant de Waard, Ford's European Marketing, Sales and Service vice president.

The three-door models feature front upper and lower grille surrounds, front bumper aerofoil and mirror caps in contrasting colours, with standard black 17-inch alloy wheels. The body kit offers front and rear sports bumpers, side skirts and rear roof spoiler; and the contrasting colour roof on both models has been painted to achieve a consistent and higher quality gloss finish than can be achieved using a foil applique or sticker.

"Both cars have an execution that's bold, distinctive and contemporary, but the Red and Black present subtly different personalities that will appeal to different customers," said John Mcleod, Ford's European Vehicle Personalisation chief designer. "The more provocative car is the Black Edition  its red detailing and the grille surround deliver a high contrast for drivers that want to be noticed. The Red Edition car is highly expressive yet a little bit more subtle for the less exuberant owner."

The 140PS 1.0-litre EcoBoost features a unique calibration with new settings for turbocharger boost control, valve-timings, intercooler and throttle management to deliver 12 per cent more power and an even sportier driving experience with 0-62mph acceleration in 9sec and a top speed of 125 mph, while still delivering 62.8 mpg fuel efficiency and 104g CO2/km emissions. *

"This new 140PS 1.0-litre EcoBoost engine now delivers more than twice the power on a litre-for-litre basis than its predecessor  the 1.6-litre 100PS engine that powered the sporty Fiesta S just 10 years ago," said Andrew Fraser, Ford's European Gasoline Calibration manager. "I believe this engine sets a new benchmark for power combined with fuel efficiency from a small petrol engine."

Ford's 1.0-litre EcoBoost engine was named International Engine of the Year in 2012 and 2013. Like the 100PS and 125PS versions of the 1.0-litre EcoBoost that were chosen by nearly 30 per cent of Fiesta customers in the first quarter of 2014, the 140PS 1.0-litre EcoBoost uses turbocharging, twin-independent Variable Cam Timing and high-pressure direct-injection technologies.**