Formula 1 is set for a major rule overhaul in 2021. Amongst the slew of technical changes that are expected, it is now being reported that the sport is aiming to move towards a greener, more sustainable future. According to German publication Auto Motor und Sport, Formula 1 plans to switch to carbon-neutral fuel as early as 2021. Apparently, F1 believes that carbon-neutral fuel is even better for the environment than electric power, and is hoping to move in this direction over the course of the next few years. 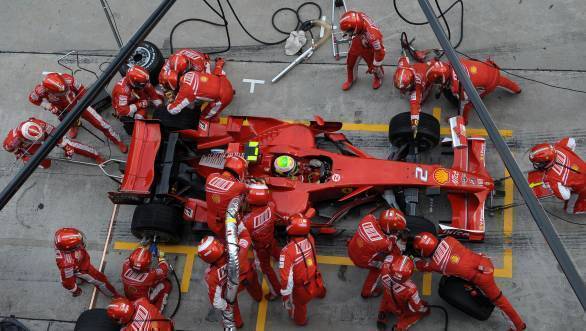 File photo of a Ferrari pitstop at the 2008 Malaysian GP, with the refuelling rig in action

Auto Motor und Sport quoted an engineer as saying, "Let's put our foot in the door now. Then the momentum will take over. If we do nothing, nothing will happen. Only those who start at 20 per cent will someday get to 100."

It has also been reported that many people within Formula 1, including the fuel suppliers, and team principals like Renault's Cyril Abiteboul, approve of the new carbon-neutral fuel idea. Abiteboul was quoted as saying, "There will be new forms of fuel coming up in the next few years, whether you are talking about more biofuel - so a different composition - or even synthetic fuel, coming from non-fossil sources."