Formula 1 has been in the doldrums for a while now. If it hasn't been the fact that the smaller teams are struggling to keep pace with the bigger teams in terms of finances, then the sport itself has had to deal with flagging ticket sales and a drop in viewership. The differences between the haves and have nots have become starkly apparent with each passing day. At the end of the 2012 season, Formula 1's twelfth team, HRT, shut shop. Since then, teams like Lotus and Sauber, front and mid-field teams, have struggled financially, both failing to pay their drivers' salaries. That the sport has received negative publicity, and has had even the most hardcore fan rolling his or her eyes, cannot be denied. The fact that Red Bull has dominated the past three seasons of Formula 1 quite comprehensively hasn't helped matters at all. And it is amidst this negative atmosphere that the FIA has released a set of new sporting regulations that they hope will infuse some more enthusiasm into the sport, and ensure that the championship ends in a down-to-the-wire battle. 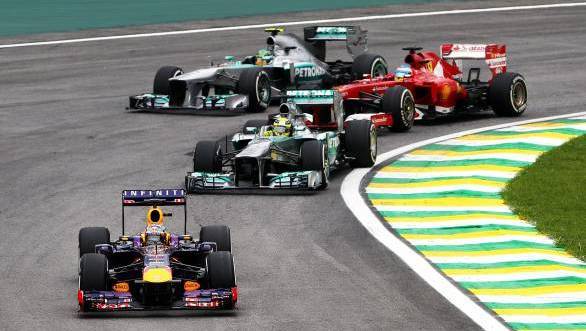 The much-awaited budget cap to be put in place in 2015
The Resource Restriction Agreement (RRA) has been something that was talked about all through the 2012 season of F1. While the mid-field and smaller teams were quite keen on having the RRA implemented, it was ultimately scrapped after Red Bull vetoed the proposal. The Australian energy drink backed company, with the power of many greenbacks on their side, believed that since they didn't have a manufacturer backing them, the RRA would have an adverse effect on their performance. However, the HRT F1 team's exit from F1 saw the grid shrink to 22 cars, and with teams struggling to pay drivers their salaries, the F1 budget cap seems to be the need of the hour. And with prominent Formula 1 figures, such as Sauber Team Principal Monisha Kaltenborn coming out as very vocal supporters of the proposed budget cap, it finally looks like the cost cap will be put in place. Indeed, the recently released FIA regulations state that the "limit will be applied from January 2015". A working group comprising the team representatives, FIA and commercial rights holders will be put in place and it is this working group that will have to ensure that regulations are approved by the end of June 2014.

Permanent numbers for drivers
Remember back in the day when you'd see the No 27 Ferrari flying down Beau Rivage and you'd know that it was Gilles Villeneuve? Well, the recent times have seen Formula 1 drivers bear the number of their team's finishing order in the previous year's championship. This means that the world champion bears the number 1, while his team-mate carries the number 2. The second placed team allots its drivers numbers 3 and 4, all the way down to the last driver on the grid. The number 13, however, is skipped because of superstition. Now, the FIA has decided that drivers must pick a number between 2 and 99 that will be theirs for the duration of their Formula 1 career. The number 1 will be reserved for the reigning world champion, should he choose to use it. If two drivers choose the same number, the driver who finished higher in the previous year's championship gets first priority.

Double points for the season finale
The final race of the season, in the case of the 2014 calendar, the Abu Dhabi Grand Prix, will count for double points both in the drivers championship and the constructors championship. This has been done in an attempt to ensure the championship battle is even closer, and to prevent a team such as Red Bull from sealing the title well ahead of the last race. Double points for the finale doesn't just have a serious bearing on the ultimate winner of the championship. Indeed, for the teams towards the back of the pack as well, doubling the points in the last race could make a huge difference. The F1 community still doesn't seem to have accepted this rule with open arms, given the fact that their hard work through the year could well be negated by a fillip at the last race.

New penalties
The FIA has also decided on a five-second penalty for various infringements. What these infringements are haven't been made clear yet, however the FIA regulations state "In what form such a penalty will be applied will be discussed with Formula One's teams in order that a new regulation be introduced for 2014 season."

The much needed Pirelli tyre test
After the exploding tyre fiasco at Silverstone this year, the FIA, and Pirelli especially, were rather shamefaced. They have now decided that on safety grounds a three-day test will be allowed at Bahrain between the 17th and 19th of December. The regulations state "The F1 Commission agreed to a change to the 2013 Sporting Regulations, on safety grounds, allowing the Formula One tyre supplier to carry out a three-day test in Bahrain from 17-19 December, 2013. All Formula One teams have been invited to take part in the test and six have accepted: Red Bull Racing, Mercedes, Ferrari, McLaren, Force India and Toro Rosso."

Will the new regulations have the desired effect on the sporting side of Formula 1? We'll know once the season kicks off in March 2014.