Audi has completed its takeover of the Abt team, and will be a full-fledged works team in the FIA Formula E championship beginning next season. The manufacturer will thus become the first German automaker to enter the sport as a works outfit. The team will run as Audi Sport Abt Schaeffler next season. Audi has announced that Schaeffler will continue as its technology partner over the course of the next season. 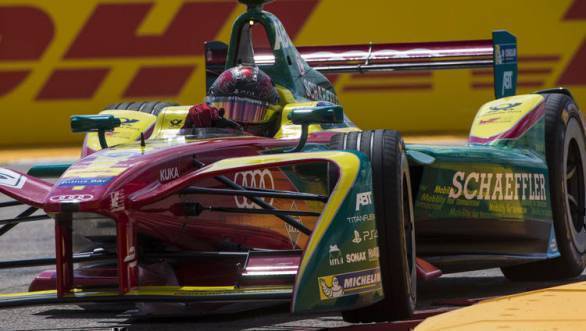 Audi had already announced it would be part of Formula E in a bigger way, last year. Yesterday, Audi announced the conversion of the Abt outfit to the Audi works team. "We've been supporting the Formula E commitment with increasing intensity in recent months  on the race days, in the development of the new powertrain and in numerous off-track activities as well," says Dr. Peter Mertens, Member of the Board of Management, Technical Development, AUDI AG. "That Audi will be the first German automobile manufacturer to be actively involved in the racing series starting next season is also a clear commitment of our brand to electric mobility, on the race track as of December and next year on the road as well with the new Audi e-tron."

Heading Audi's Formula E operations will be Audi's existing head of motorsport, Dieter Gass. Speaking on the occasion Gass said that they are now working towards Audi's successful future in the sport. Meanwhile, Abt will remain the operational partner for Audi.

Meanwhile, Abt team owner Hans-Jurgen Abt said,"Within the space of just a few years, Formula E has seen such a strong development that a team can no longer be competitive without the backing of an automobile manufacturer. That's why we're gladly handing over the reins to Audi  a partner we've been successfully cooperating with in motorsport and routine business for many decades."