Victory at the Berlin ePrix, round 9 of the 2017/18 Formula E championship went to Daniel Abt. The German driver, who competes for the Audi Sport ABT Schaeffler team, finished ahead of team-mate Lucas di Grassi at the Tempelhof Airport track. 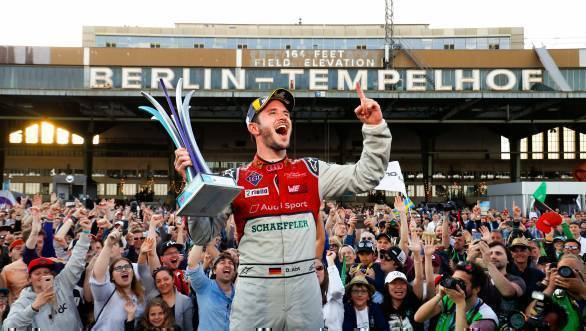 Daniel Abt celebrates his victory at the Berlin ePrix.

Abt took what is only his second win in Formula E, having already won the Mexico City ePrix earlier this year. He started from pole, which earned him three points, then collected an extra point for setting the fastest lap, and took 25 points for the race win. The German driver had a fairly trouble-free race, never being bothered at all once he was at the head of the order. However, he had a slow pitstop, which meant that he lost three seconds to his team-mate. This meant that the gap between Abt and di Grassi was down to under a second after the mid-race car swaps.

While Di Grassi wasn't able to really challenge Abt for the win, there was a rousing cheer from the German fans, happy to see a home hero win the race in Berlin. The duo are only the second in the history of Formula E who have managed a one-two finish.

Third place went to Jean-Eric Vergne, with the Techeetah driver ensuring his lead at the head of the championship remains undisturbed, extending his points lead to 40 over nearest title rival Sam Bird.

It was a disappointing race for the Mahindra Racing drivers, with Nick Heidfeld finishing 10th and Felix Rosenqvist, who took the team's first ever win at Tempelhof last year, finishing eleventh.