After having missed out on victory at Marrakesh last year, Felix Rosenqvist made amends for just that, clinching a fine win at the second Formula E race of season four, the Marrakesh GP. This was his second consecutive race win of the season, with the Mahindra Racing driver having already won the season-opening race at Hong Kong. 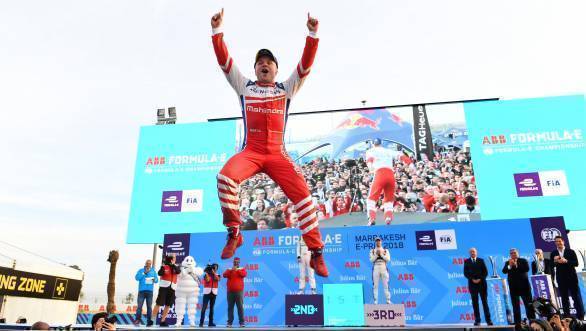 Felix Rosenqvist jumps for joy after winning the Marrakesh ePrix

Rosenqvist was quite comfortable at the head of the order taking the lead from Sebastien Buemi early on in the race. Once in the lead, Rosenqvist didn't look back at all, going on to take victory. The victory also ensured that Rosenqvist moved to the head of the ABB FIA Formula E Championship standings, four points ahead of DS Virgin Racing's Sam Bird.

While Buemi finished second, it wasn't entirely easy going for the Renault e.dams driver. Despite the fact that he had been on pole, there was an issue with his car's water pump. The Renault engineers ended up switching the order of his cars, in order to get him out on time. Despite the fact that he managed to lead after the pit stops, it was the Mahindra Racing driver who proved to be invincible.

The other Mahindra Racing driver, Nick Heidfeld, managed to put in a strong performance too, racing his way through the field, ending seventh. This was particularly commendable, given that he had started at the back of the grid, having hit the wall during qualifying.

Race winner Rosenqvist said, "At one point in the day I was going to be settling somewhere in the middle of the mid-field after practice as we were struggling a lot. We then made some analysis and in qualifying we found out how to work the tyres properly, so that was a really good comeback before the race. I was told I had to change my battery thirty-minutes before jumping in the car before the grid, so I was praying that my second car would be ready. Big thanks to the Mahindra guys. I think I was a little bit lucky with Lucas dropping out of the race quite early on, and obviously Sam had a problem with his car on the main straight as well. I tried to keep calm and look at my energy, because this race wasn't really about the temperature but more about energy, and when the moment was right I went for it - super happy!"

The victory has also ensured that Mahindra Racing continues to lead the Team's Standings for Season 4.