Four-wheeler sales in India for March 2016 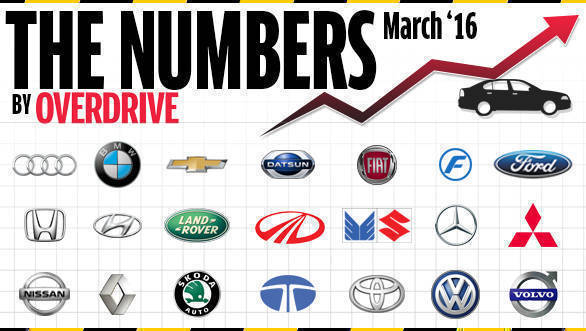 The French carmaker has registered a stellar growth of 160 per cent with 12,424 units sold in March 2016. In the corresponding month last year, Renault had sold just 4,782 units. There's no doubt that the Renault Kwid has contributed massively to the company's growth story in India. In fact, it has turned out to be game changer for Renault in India. Since its launch in September 24, 2015 the Kwid has received over 85,000 bookings. Just a month ago, the company launched the Duster facelift with a 6-speed Easy-R AMT.

Speaking on the sales growth, Sumit Sawhney, CEO and managing director, Renault India Operations, said, "Renault is one of the fastest growing automobile brand in India. In a short span of time, we have exponentially grown our reach in terms of sales and network expansion. We are grateful to our customers for the confidence and trust bestowed in the Renault brand which is reflected by our increasing sales, despite the challenges the industry is facing. This month, we recorded our best ever sales figures in India, and we will continue to maintain this positive momentum as we strategically work towards increasing our market share in India."

The country's commercial vehicle market leader  has registered sales of 6,876 cars in March 2016 which is 47 per cent lower than the units sold in the corresponding month last year.

In order to gain more market share, the company is expanding its product portfolio. It will be launching the Tiago hatchback on April 6, 2016. The Tiago will be positioned below the Bolt hatchback and Tata dealers are currently accepting bookings for an amount of Rs 10,000.

Honda Cars India has announced sales of 17,430 units in March 2016. It had sold 5,266 units more in the corresponding month last year. The City was the highest selling model for the company in March 2016 with 5,662 units sold. The company is likely to introduce the BR-V to our shores sometime between May and June this year.

Speaking on the company's sales performance, Jnaneswar Sen, senior vice president, marketing and sales, Honda Cars India Ltd. said, "Year 2015-16 was an eventful and rewarding year for HCIL. We continued our growth journey in the market making this year as 4th consecutive year of annual sales growth. The new fiscal year holds tremendous opportunity for our further growth as we will enhance our product line-up with the launch of new models and expand our dealer network. We are excited about the upcoming launch of Honda BR-V which will mark our entry into a new product segment."

In an official release, the company has stated that for the fourth consecutive year, the Alto, Swift, Dzire and WagonR continue to remain the top four best-selling models. Along with expanding their sales network, the arrival of newer models like the Ignis and 2017 Swift are likely to keep Maruti showrooms busy.

Speaking on their sales performance, Rakesh Srivastava, senior vice president, sales and marketing, Hyundai Motor India Ltd. said, "Hyundai for FY '15-16 achieved an all-time highest volume of 484,324 units with 15.1% yearly growth with highest-ever market share of 17% plus on the strong performance of models like Creta, Elite i20 and Grand i10 with many innovations on product and channel under the Vision of Experience Hyundai."