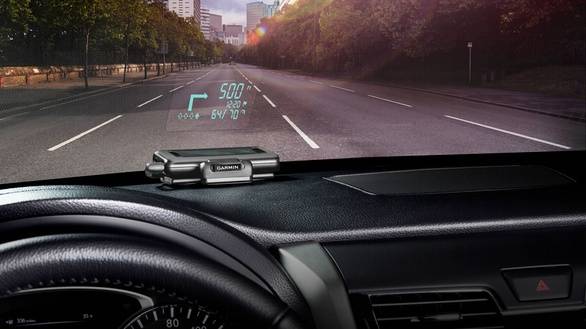 Paired with a transparent film that sticks to the window or a dedicated reflector lens, this relatively inexpensive HUD is designed to make sure drivers don't take their eyes off road for navigation purposes.

The HUD's data is provided by one of Garmin's navigation apps - either Navigon or StreetPilot - on an Android, iPhone, or Windows Phone 8 smartphone. The heads-up display pairs with your handset via Bluetooth to communicate with the navigation app (many phones can also simultaneously pair with your car's Bluetooth audio system to broadcast the spoken portion of the turn-by-turn directions and to take incoming calls.)

The HUD can display turn arrows, distance to the next turn, current speed and speed limit, as well as estimated time of arrival. It also offers speed limit alerts, traffic delays, and locations of cameras, and guides drivers into the correct lanes they need to be in.

Garmin claims that the unit can auto-adjust its brightness so that it is visible in direct sunlight or at night. However, the company is by no means ahead of the game with the HUD; several high-end cars have been using them for years.

Garmin, however, contends that its portable HUD provides more details and information than competing units and comes at a relatively cheap price of $129.99.