Audi took the 2018 Geneva Motor Show as a platform to showcase their first all-electric e-tron SUV prototype. Before the SUV enters full fledged production, Audi will be making 250 development vehicles that will complete testing under extreme conditions worldwide. Audi has not mentioned the driving range that it plans to achieve on its first all-electric offering but states that it will have "a range suitable for everyday use.". The production version of the Audi e-tron launches on the European market at the end of 2018. 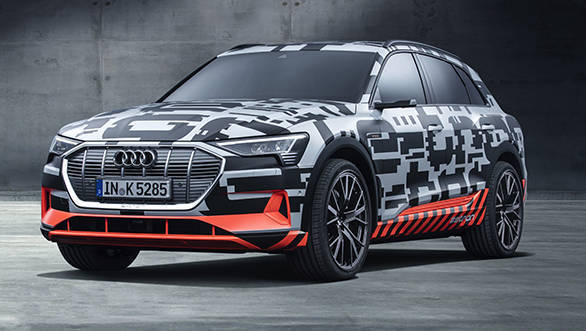 The Audi e-tron prototype offers a preview of the first purely electrically powered model from the brand. The SUV combines a roomy interior with a range capable of covering long distances.

Audi states that the production version of the e-tron prototype can fill up on electricity at fast-charging stations with up to 150 kW charging capacity. In just under 30 minutes, the Audi e-tron is claimed to have sufficient driving range for a highway journey. The Audi e-tron SUV prototype will come equipped with electrical quattro.

"Audi sets an important milestone for the company's future with its first purely electrically powered model," said Rupert Stadler, chairman of the board of management of Audi AG. "In 2020 we will have three all-electric vehicles in our product range, with a four-door Gran Turismo  the production version of the Audi e-tron Sportback concept  and a model in the compact segment joining the sporty SUV. We will be launching more than 20 electric cars and plug-in hybrids by 2025  spread across all segments and concepts," stated the Audi CEO. 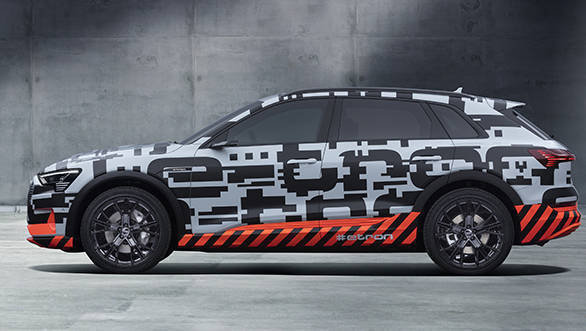 The distorted e-tron lettering stretches across the entire flank, as if it was charged with electricity.

The Audi e-tron prototype will not come with conventional prototype camouflage, but instead with one that highlights electrification with a specially developed design film. The distorted e-tron lettering stretches across the entire flank, as if it was charged with electricity. The "e" will be seen on the tailgate at the height of the front fender. The overall design of the camouflage is intended to mimick the high-voltage grid, orange elements illustrate the fact that the Audi e-tron prototype is fully electric  the lower part of the car, for example, is encircled with alternating orange and black segments. The expressive sills, with their colorful inserts, indicate where the battery and therefore energy center of the car are located. 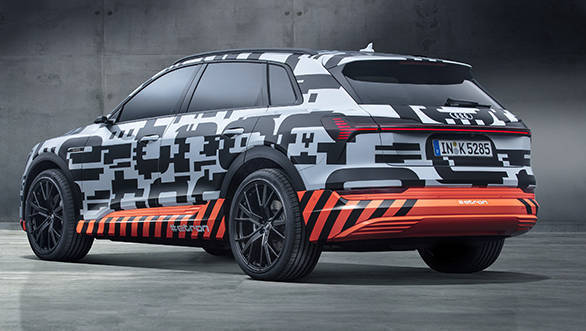 The expressive sills with orange inserts show the location of the battery and therefore the energy center of the car.

The 250 Audi e-tron prototypes will cover more than five million kilometers roughly equivalent to 125 times around the earth and 85,000 hours on the road. It will complete test drives on four continents which includes. Some of the locations where the Audi e-tron will be tested include Scandinavia, Africa, Nürburgring and also in Chinese cities and American highways. The climate zones ranging from below -20 to above +50 degrees Celsius will make sure that the Audi e-tron's battery powertrain can withstand all kinds of climatic conditions.