GM to launch a subcompact car in India this year

Stefan Jacoby, GM's executive vice president, Consolidated International Operations, according to an online report was quoted saying that the carmaker will announce a strategic plan later in the year which will involve newly-designed subcompact cars for the Indian market. We expect this small car from GM to take the fight to Maruti, Hyundai and Tata in a bid to capture the 'car of the masses' segment.

The new car will most probably be based on the Spark platform and will be powered by an 800cc engine tuned for efficiency. The car will be launched first with a petrol engine and we expect CNG and LPG versions after a few months. Chevrolet must price this car at around Rs 2 lakh to compete with the trusted Maruti Suzuki Alto 800. There also are plans to bring the Spark Electric to foray into the potentially untapped market. 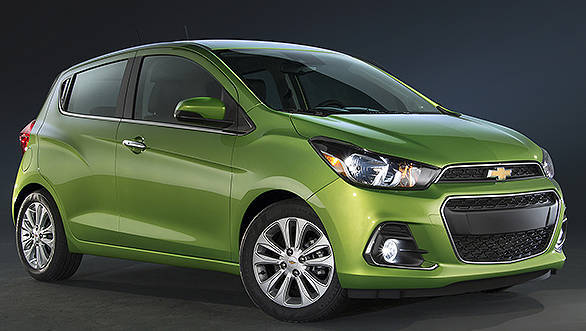 The US-spec new Chevrolet used as a reference. This car is not coming to India

GM plan to counterbalance their losses in India which have accumulated to Rs 3,843 crore in the year ending March. GM's sales in India last year were recorded at around 57,600 vehicles which looks bleak in comparison to their major competitors. However, with their new strategies involving market specific launches, they aim to sell 4 lakh units a year by 2025 which will help increase their current market share of 1.8 per cent to a respectable 5 per cent.

GM's stint in India has been more of a rollercoaster ride till now with mixed responses for all vehicles. Lower prices for vehicles is also a possibility since they plan on making India their export hub. They also have plans to increase localisation to 70 per cent. GM may have learnt from their experience with the Chevrolet Optra S-RV which despite having gained considerable interest among petrol heads, was out of reach for most enthusiasts looking for a hot hatch.

We hope that this new launch will help GM recover lost ground and help them emulate the success they enjoy in the US.

Chevrolet will also take on Toyota in the SUV and MPV segments with the new launches of the Trailblazer and the Spin in India. These new launches are aimed at attracting potential customers of the Fortuner and Innova which are currently segment benchmarks.