The Vulcan is a super exclusive, limited edition, track-only supercar that Aston Martin will make just 24 units of. The machine made its dynamic debut at Goodwood at the hands of Aston Martin factory race driver Darren Turner. The run itself is not the fastest dash up the famous hill; it is an ultra rare machine after all but it does offer the lovely soundtrack of that mighty engine. 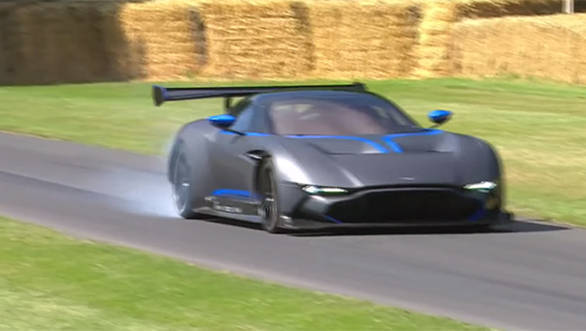 The Vulcan runs a high powered, naturally aspirated 7.0-litre V12 engine that Aston says puts out in excess of 800PS while kerb weight should be around the same as the GT3 racecar (around 1,300kg) which incidentally makes much less power. This makes the Vulcan the most powerful car the company has ever produced, even more than the 760PS One-77 hypercar that was built from 2009-2012. Aston Martin claims a 0-100kmph time below 3 seconds and a top speed in excess of 320kmph.

The engine is mounted in a front-mid configuration, behind the front axle and power is sent to the rear wheels via an Xtrac 6-speed sequential gearbox. Just like a racecar. The body itself is a carbon-fibre monocoque built by Aston Martin's body engineering and manufacturing partner Multimatic. Braking comes from powerful Brembo carbon ceramic racing disc brakes that measure 380mm and 360mm at the front and rear respectively. Putting the massive power to the ground are fat 345 section Michelin race rubber tyres but as you can see from the video, they can easily be overcome, leading to a screeching smoke fest.