The machinery in place for maintaining safety on Indian roads is nearly non-existent, what with driver's and rider's permits handed out without stringent licensing methods and the government going easy on violators of traffic rules. There is a general apathy towards road sense that needs to be curbed. We might be in for a change with the Indian government set to reform the Road Safety and Transport Bill. This bill will be presented to the parliament during the winter session. Meanwhile, some of the pointers proposed in the bill have been made public.

Drivers found being rash and negligent on the road are liable to get their permits cancelled. Those found using a car that does not meet safety standards can attract fines of upto Rs one lakh or even be sentenced to imprisonment upto six years or both. The bill proposes that wearing of seat belts and helmets while on-board four- and two-wheelers, by drivers/riders and passengers/pillions alike, be made mandatory. A fine of upto Rs 5,000 and Rs 2,500 can be charged to those who fail to follow this rule, which also applies to commercial vehicles like buses. Bus drivers are to ensure that passengers below the age of eight do not occupy front seats unless accompanied by a guardian or parent. A fine of Rs five lakh will be levied on the indicted vehicle and the driver can be imprisoned for rash driving as well as stand to get his or her licence cancelled. Violation of a traffic signal thrice will result in Rs 15,000 fine, compulsory refresher training and licence cancellation for a month. 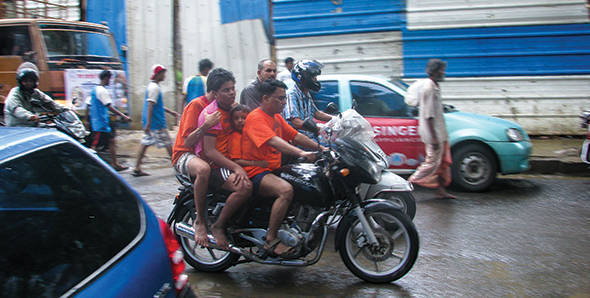 If caught driving while intoxicated, the first offence will attract a fine of Rs 25,000 or imprisonment upto three months or both. The driving licence will be suspended for six months. For a second offence, the penalty is doubled with a fine of Rs 50,000 or imprisonment for a year or both and suspension of the licence for a year. Repetition of this offence will result in confiscation of the vehicle and cancellation of the licence. The penalty gets more severe in case of school bus drivers where the proposed fine for driving under intoxication is Rs 50,000 and immediate cancellation of the driving permit for offenders between 18 and 25 years of age. This is over and above the sentence of imprisonment of upto three years. In the event of a casualty, the sentence is a minimum of seven years and a fine of Rs three lakh.

The goal of reducing road fatalities by 20 per cent cannot be achieved by employing methods of retribution alone. Preventive measures such as introducing a unified biometric and single-window automated driving licence system can help avoid duplication of permits. There is also the proposed adoption of new technologies like driver alert control, green box monitoring and eye drowsiness detectors.

These points proposed in the bill raise a lot of questions too - will people who can afford the fines continue to get away with violating traffic rules? And what about those who can't? The other angle that has not  been addressed is the education of road users - wherein drivers, riders and pedestrians alike should be made to study traffic rules, road signs and their importance and other forms of communication on the roads. Another point that has gone ignored is the need to introduce refresher courses for traffic rule violators.

The list goes on. Let us know how you feel regarding the bill and whether they will be effective in bringing in the much needed change.