Greaves Cotton today announced the completion of the stringent BS-VI certification for its single-cylinder diesel engine which it claims is the cleanest single cylinder diesel engine on the planet with significantly reduced emissions. The company mentions that these future-ready engines will power diesel 3W of multiple OEMs in India for last-mile transportation, with Piaggio's Ape range of diesel 3W being the first. This single cylinder engine claims to deliver superior fuel efficiency and lower total cost of ownership. The company explains that this new BS-VI engine is powered with advanced fuel injection technology and after-treatment systems that ensure highly consistent pollutant reduction. This single cylinder diesel engine is built for affordable 3-wheeler application providing better torque, enhanced load carrying capabilities and significantly reduced emissions. 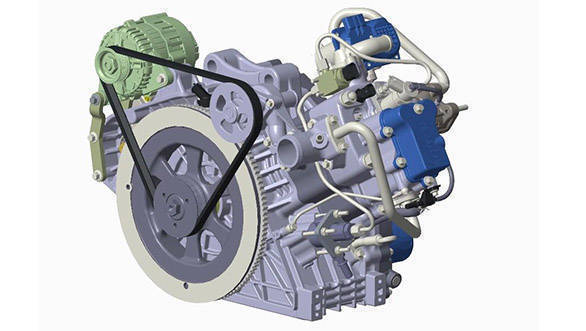 "The launch of our single-cylinder BS-VI Diesel engine for 3W application is a milestone not just for us but also for the automobile industry in the country. This is a significant technological achievement for us considering that there were no worldwide benchmarks to emulate and that we built this compact engine ground-up in record-time. Greaves BS-VI Single Cylinder Diesel engine along with our strong aftermarket support will enable our OEM partners to contribute significantly to pollution reduction on the roads while offering greater value to their customers in India and export markets. It opens up opportunities to lead clean diesel applications worldwide. We see this technology breakthrough as yet another strategic achievement in building world-class clean-mobility solutions ranging from clean Diesel to CNG and electric." commented, Ravi Damodaran, Chief Technology Officer, Greaves Cotton.

In addition to launching the BS-VI compliant engine, Greaves is also currently strengthening the Aftermarket network and rolling out upskilling initiatives to equip mechanics around the country with the necessary know-how to service these BS-VI engines. As per the regulatory requirement, all the vehicles in the Indian market to run only on BS-VI compliant vehicles from April 1, 2020. According to the new BS-VI new emission norms, there needs to be a drastic and compulsory technology adoption and modifications by the manufacturers of vehicles in the country in order to be at part with emissions standards followed by US and European markets.