Hero has just unveiled the HX250R, a quarter-litre stunner that is sure to liven up the lightweight performance motorcycle segment.

Besides the HX250R, Hero also unveiled four more products, chief among which is a revolutionary new scooter concept, the RNT, which gets a turbo-diesel engine. Also unveiled at the event were the Xtreme sports bike as well as the Leap and Dash scooters. Expect all these two-wheelers to be showcased at the 2014 Auto Expo. 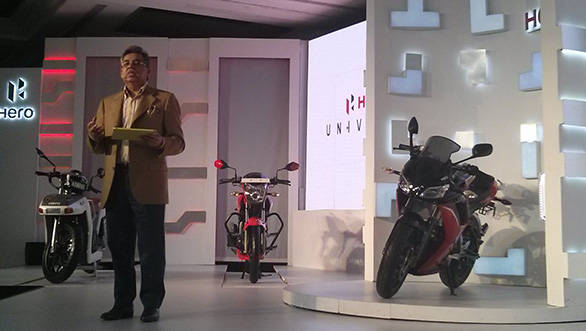 Pawan Munjal at the HeroMotocorp unveil. From left: the RNT concept, Xtreme and the HX250R

The motorcycle is a looker and has been designed and developed by a combined effort of the Hero Group and their technology partners Eric Buell Racing, AVL (Austria) and Engines Engineering.

The specs are just as stunning as the motorcycle's looks: 31PS from a 250cc single, combined ABS and under seat exhaust all packaged into a 139kg kerb weight. Add to this, this is Hero's first inhouse built 250cc motor which will go into production and has no relation to Honda's 250 engine.

To compare it with its most obvious competitor the Honda CBR250R, the Hero HX250R is 5PS more powerful and a whopping 28kg lighter.

Hero has confirmed a launch date in the next fiscal year but considering that they are still to launch the number of updates that they displayed back in October, this motorcycle may only get launched towards the end of the year or early 2015.

Below are the full specifications of the Hero HX250R.