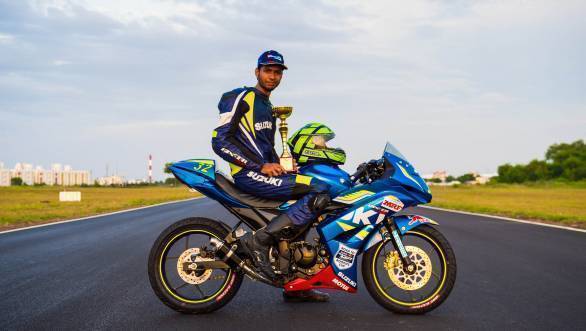 For Sachin Chaudhary, that happened sometime towards the end of 2015. A little life-changing moment that occurred when he keyed a few words into Google. For years, like many other young chaps growing up watching a rather exciting era of grand prix motorcycle racing, Sachin had wanted to find a way to get to MotoGP. Not actually MotoGP itself, but he'd at least wanted to try and get moving somewhere on the path towards motorcycle racing. His parents were staunchly against it, concerned for his safety. But seeing as he wouldn't relent, they gave in. "Why don't you try it and see what comes of it," his father said to him one day. Which resulted in Sachin's discovery of Apex Racing online, and their three-step training programme that would help a novice get race-ready.

In February 2016, Sachin began his training programme, completing all levels one after the other. In June 2016, he was ready for the Indian edition of the Red Bull Road to Rookies Cup that was held alongside the Suzuki Gixxer Cup. Racers between the ages 13 and 17 were allowed to compete astride race-prepped Gixxers, all in the hopes that they would, at the end of six races, win the chance to represent India at the Road to Rookies Cup selection round in Spain. As things would turn out, Sachin would win. He'd go to Spain, get astride one of those Moto3 machines, and have a go at tackling Circuito Guadix. He'd realise what one of those machines was capable of - that it would drain the rider in an instant. He'd choose not to feel sad that he didn't make it through the programme, being eliminated after the first day of riding, but instead feel glad that he'd managed to come somewhere close to being fit enough to ride one of those bikes. And he'd return to India with a renewed determination to work harder, improve and pursue his dreams of a career in motorcycle racing.

And it's exactly this that he is doing. Training in the gym to keep fit, solving logical reasoning problems to keep his mind sharp, and charting out a plan with his rider coach, B Jeeva Reddy, for the course of action for his 2017 season of racing. He's now qualified to compete in the Expert class of a series in the National Motorcycle Racing Championship. And he's eyeing the Honda CBR250 One Make Championship.

For Sachin, it's been a year of tremendous learning and growth. In the span of just one single year, he's learned to race, he's competed and won a national-level racing series, and he's gone abroad and ridden a Moto3 machine. But more importantly, he's realised that it's possible. That those leaps of faith pay off. That irrespective of the end result, doing something that you have been hoping and wishing and yearning to do can take you places. That if you want to chase the sun, the rain, or that seemingly impossible dream, you need to move. The rest will follow.

You see, when Sachin decided that he wanted to be a motorcycle racer, that he was finally going to give it a shot and see what came of it, that's all he aimed to do. Just give it a shot. There was no long-term plan that he had in place. He trusted that once he completed his levels of training, his coach would help him figure things out. He didn't set himself a task of winning a championship, he didn't worry about whether he'd win every single race, or whether he'd beat the other guy by a second or two. For him, there were smaller things to deal with. Figuring out why he crashed repeatedly at the same corner. And then finding a solution to ensure that it didn't happen again. Figuring out how to shave a little time off his last lap. Figuring out the ideal line through a particularly tricky corner. And in the process of solving these little pieces of the puzzle, the larger picture became clear. A terrific series presented itself that could potentially give him the chance to get to the Rookies Cup. The structure and support system that he needed slowly formed. It wasn't something he imagined would happen in his very first year of racing. But it did.

We all have those impossible dreams. The ones that we put on the back burner because they seem insurmountable. The ones that we decide not to pursue, because achieving them seems unrealistic. Or because the opportunities that we hope for don't exist. More often than not, I've found that the opportunities do exist. We just need to look for them. And if they don't exist, as we're working steadily on towards our dreams, they have the habit of mysteriously appearing. Maybe all we really need to understand is that while the whole is greater than the sum of its parts, it's the parts that need to be dealt with to achieve the whole. And that in order to achieve that impossible dream, we just need to break it up into tiny achievable goals.