Honda has unveiled the all-new Honda City and opened pre-launch bookings all across India. Booking amounts vary from Rs 50,000-1,00,000 while deliveries, a dealer says, will start from end-January 2014.

The new City will be available with both petrol and diesel options. The tried and tested 1.5-litre i-VTEC engine from the previous-gen City will now develop around 120PS without compromising the class leading performance and fuel efficiency that it is known for. It will be mated to a manual gearbox while an automatic one, like before, will be available as an option.

The diesel, which Honda says will account  for nearly 70 per cent of the sales, will be the familiar 1.5-litre i-DTEC unit from the Amaze. In the City though, it is expected to make more power and torque while retaining the Amaze's fuel efficient characteristics. Honda also says that the City diesel will be the most fuel efficient car in its segment. 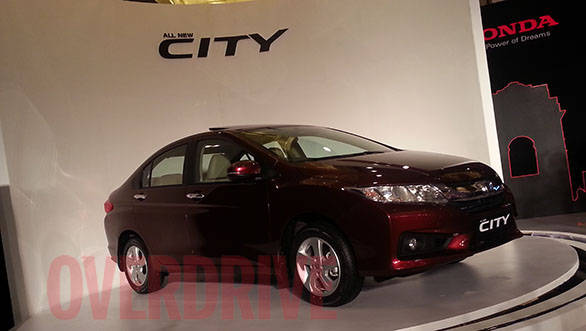 Click on the Honda City for the complete image gallery

[10 things you must know about the new Honda City diesel]

The new City also gets new features like push button start, touchscreen audio and navigation system, rear view camera and many others. It also claims to be more spacious than its predecessor. Honda will launch the new City in India in January next year.