Honda has teased an image of its Civic Type-R concept which is scheduled to debut at the Geneva Motor Show.

The  Civic type R is a wildly popular model from Honda stables and has a number of young enthusiasts around the globe who pep it up with aftermarket parts making it a sportier and more performance oriented machine. 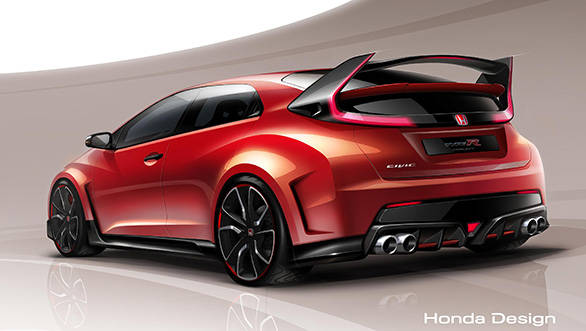 The current generation type-R has a 2.0 litre four cylinder engine making 200PS and 192Nm of torque which might not sound much. Now, take the weight of 1338 kg in to equation and what you get is very quick machine. The 0-100 km/h dash is completed in a claimed 6.4 seconds. Expect the next gen car to be faster than the current offering. Propelling the vehicle forward are the front wheels to which power is transmitted through a six-speed gearbox.

Honda in the past few years has acquired a reputation for showcasing their near production ready cars in concept forms. In all probability the vehicle to be showcased will be the next production version of this hot hatch.