Hyundai has rolled out five million cars in India since 1998

Hyundai India on Monday reached a milestone by rolling out its five-millionth car for the domestic market here. The country's second largest car maker marked the achievement with its 2017 Hyundai Verna. Hyundai Motor India Ltd (HMIL) had begun operations in India in 1998 with the launch of the Santro, which may make its comeback soon as the company's new compact family car. The next-gen Santro was also recently spied being tested. Riding the popularity of the Hyundai Santro and subsequent models, Hyundai India had reached its first million cars by 2007. With the 2018 Auto Expo coming up, Hyundai may also switch gears and showcase its Ioniq hybrid sedan, which could be one the new models it has planned for India over the next three years. Hyundai India claims it is the quickest to reach the five million mark among all passenger vehicle manufacturers in the country. 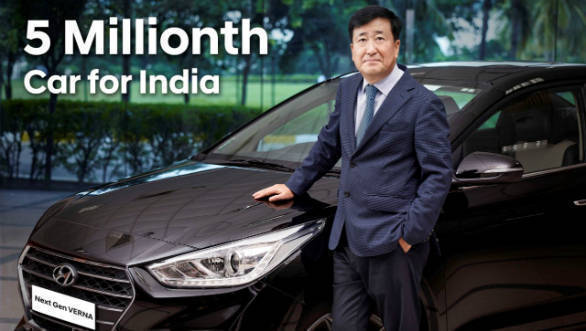 In 2010, Hyundai had reached the two million car mark, followed by three million in 2013, and four million in November 2015. Speaking about the feat, HMIL MD and CEO YK Koo thanked Hyundai customers and said that the fastest-to-five-million mark shows Hyundai's long-term commitment to India. Internationally, Hyundai is set to launch eight new SUVs in the US market by 2020.