152.24kmph may not sound like much today but it is the fastest anyone has driven a fuel cell vehicle at, as of now. Hyundai's Tuscon Fuel cell, which is available in the US, recently set this record at the Soggy Dry Lake Bed in California. This is a new record for a vehicle powered by hydrogen, a fuel that is a solution to a clean and sustainable future of automobiles. 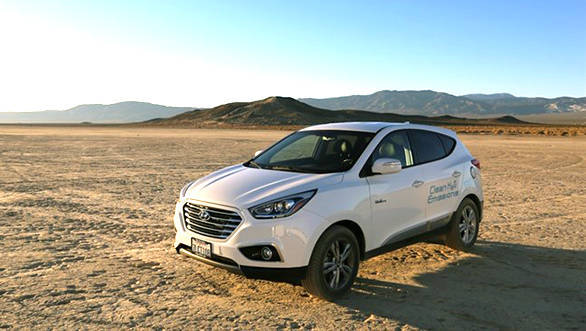 The Tuscon Fuel Cell is one of the first mass-produced hydrogen-powered vehicles and nearly 100 of them are on the roads of California, one of the most green friendly states in the world. The first of these was delivered in June 2014. Hyundai has a leasing programme in place for the vehicle whereby customers pay a down payment of $2,999 (Rs two lakh) and monthly payments of $499 (roughly Rs 33,000) for a period of 36 years. Beyond this, Hyundai will bear the cost of maintenance and provide unlimited hydrogen for free. Not bad at all for a chance to drive a vehicle of the future! 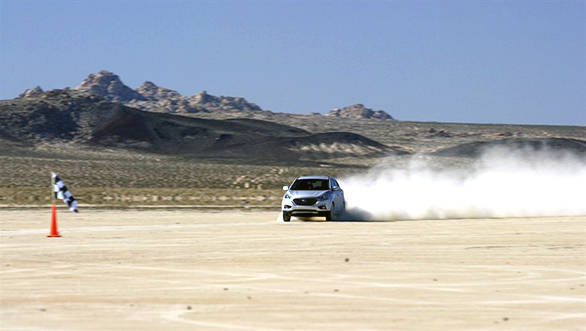 The record of 152.24kmph was set on Soggy Dry Lake Bed in California

Fuel cells basically replace the battery pack in a conventional battery. They convert hydrogen into electricity with pure oxygen and water as the only by-products. This electricity powers electric motors which in turn power the wheels. The vehicle produces about 134PS at the front wheels via its electric motor. Aside from simply going fast, the company was also pleased with the way the Tuscon handled the rough terrain to get to the test location, further reinforcing its practicality. Speaking of practicality, Hyundai claims a 425km range and a fuel time similar to a conventional vehicle that uses petrol or diesel. Of course, the limiting factor is in the number of fuel stations that offer hydrogen.