Datsun has finally made things official by releasing a teaser image of the Cross, that is all set to make its international debut at Jakarta, Indonesia on January 18, 2018. The Datsun Cross is a production version of the Go Cross concept that was first showcased at the 2015 Tokyo Motor Show, followed by its display at the 2016 Auto Expo. 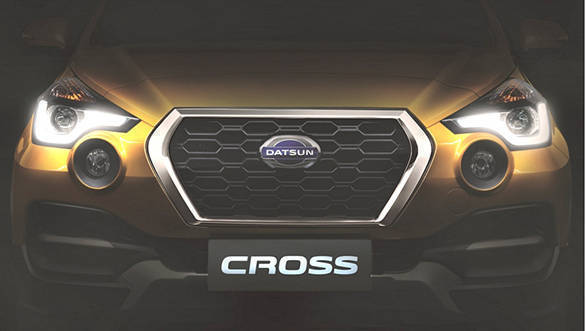 The teaser image of the Datsun Cross gives almost a clear idea of the front profile. At least from the image, it can be seen the Datsun Cross retains most of the design elements that were previewed on the Datsun Go Cross concept. It gets projector lights with LED DRLs and also fog lamps placed on the bumper, all of which will be a first for Datsun. The contours and creases on the front bumper makes it look sportier compared to the Go and the Go+ cars. There is also a bash plate that hints at a rugged crossover styling. The side and the rear will be similar to the Go+ except for minor detailing like cladding and a tweaked tailgate. The same can be seen with the leaked teaser image of the Datsun Cross. Additionally, there will be a roof rack that can take upto 30 kg of luggage. 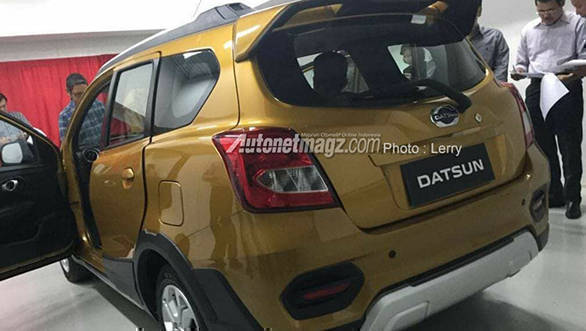 The rear quarter view of the Datsun Cross looks almost like that of the Go+ (spied image by Autonetmagz.com)

The cabin details of the Datsun Cross have still not been revealed. However, we believe that the interior design and trims will be similar to the GO cars. We expect Datsun to make the cabin more plush and equip it generously with features to make the Cross in sync with its rivals in India.

The powertrain option that is available in the Go series is the 1.2-litre petrol engine that makes 68PS of power at 5,000 rpm and generates 104Nm at 4,000rpm. For the Cross, Datsun might look at using the same powertrain in a different state of tune. However, Vincent Cobee, global head - Datsun, mentioned at the motor show that the Go-Cross might not feature a diesel powertrain and instead will come equipped with a newly developed engine, which will be offered in addition to the existing options.

The Datsun Cross will be positioned above the Go and the Go+ and will rival the likes of the Mahindra KUV100 and to some extent the Maruti Suzuki Vitara Brezza.