The highly anticipated Suzuki Ignis has been accorded a 3-star rating in the latest Euro NCAP crash tests. The Suzuki Ignis crash tested was the base version which comes with four airbags and ABS as standard. Euro NCAP also tested the Ignis with a safety pack, and this version was rewarded five stars. 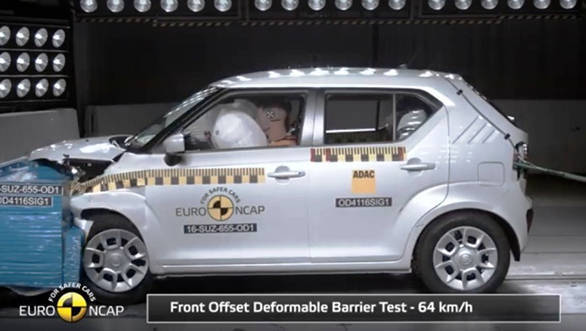 The base Suzuki Ignis along with the aforementioned features also comes with seat belt load limiter, pretensioner, ISOFIX mounting points at the rear, airbag cut-off switch for the front passenger and seat belt reminder. The report says that the passenger compartment remained stable during the test along with good protection of the knees and femurs for the driver and co-passenger. However, the driver's chest protection was relatively low while injury to the lower parts of the body was also marginal. Full points were awarded for the side crash tests. All these tests were conducted at speeds of up to 64kmph.

In the top version equipped with the 'Dual Camera Brake Support' optional safety pack, the Ignis gets lane assist system, pedestrian safety system, emergency braking for city speeds and radar-assisted braking on the highway. This version improves the safety rating to a perfect five stars. 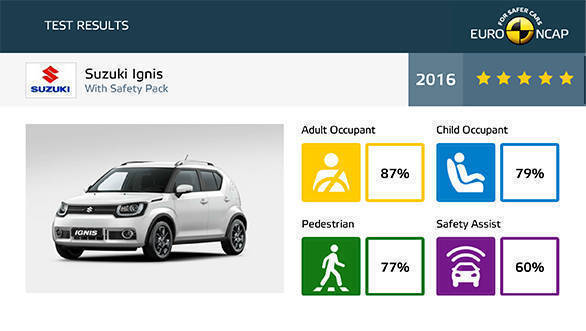 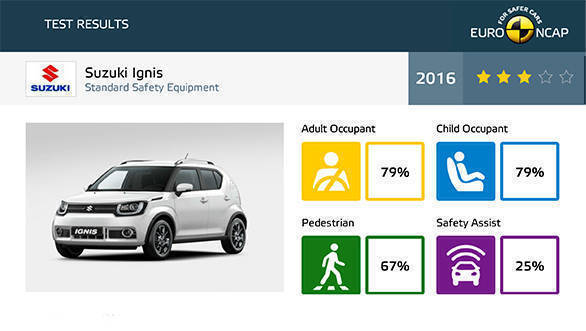 The Suzuki Ignis will be launched in India in the first half of 2017. The launch was expected to happen this festive season; however, as we know now, it is delayed due to the overwhelming response for the Baleno and Maruti Suzuki unable to do much about the long waiting list. The company's upcoming plant in Gujarat, which is expected to start operations by January 2017, will reduce the waiting periods for the Baleno and will also be the hub for manufacturing the Ignis.

Powering the Ignis compact crossover will be a 1.2-litre Dualjet petrol engine which makes 90PS. It will be equipped with the SHVS tech that we have seen on other Maruti Suzuki diesel cars in India. Speaking of which, the Indian market will also get a diesel-equipped Ignis. This could either be an all-new 1.5-litre diesel or the familiar 75PS 1.3-litre DDiS with SHVS. We will have a 5-speed manual transmission as standard while a CVT will be optional on the petrol variants.