Indian Motorcycle League or IML as it is called has been launched in Chennai. IML has been formed by motorcycle riders such as Sarath Kumar, Harry Sylvester, K Rajini, K Jagan, and Rasheed Khan, who has been appointed IML's chairman.

IML will look to nurture young talent and will be a platform for riders to display their riding skills in three rounds of endurance racing. The first round will be held at Coimbatore next month followed by the remaining rounds at Chennai and BIC respectively. TVS Racing, who has been in the racing circuit for the last 28 years, will be providing the Apache RTR 180 bikes to the riders. FMSCI has approved the IML class as well. 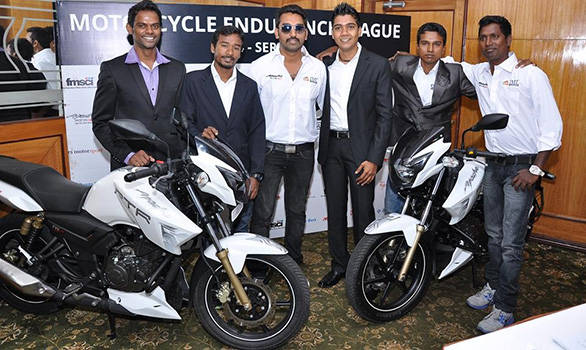 This year, IML will have only Indian riders. In 2015, there will be Asian and Indian riders, while in 2016, the series will also have international riders. "It gives us immense pleasure to announce the arrival of the Indian Motorcycle League (IML), a trendsetter and the first of its kind in Two Wheeler Racing in Indian motorsports with a new format", said Rasheed Khan, chairman IML.

Khan, who has been in motorsports for more than a decade, added, "We have many talented young riders in India, but unfortunately the opportunities for them to perform are very limited.  Keeping this in mind, IML has drawn up a plan to provide an opportunity to all the potential riders in India.  In its unique structure, IML Class is similar to IPL format where 40 riders under franchise teams from eight cities will be selected from across the country to take part in the endurance racing format."

He added that IML will be providing all the necessary riding equipment and the bikes to each of the franchise team.  Each team will also be provided its own and dedicated coach to train riders. All the riders have to do is to come to the track and IML will make sure that everything is arranged for them to take part in the race.