If all goes well,  soon a hydrogen-powered bus will be ferrying passengers in India. A collaboration of Tata Motors and Indian Space Research Organisation (ISRO) has developed India's first hydrogen-powered bus based on the fuel cell technology and are carrying out dry runs. A Fuel Cell Starbus was recently unveiled at the Liquid Propulsion Systems Centre at the ISRO facility in Mahendragiri, Tamil Nadu. 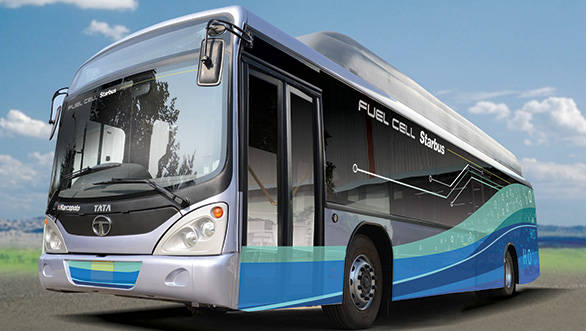 The fuel cell fitted bus was demonstrated at the Liquid Propulsion Systems Centre in the ISRO facility in Mahendragiri, Tamil Nadu

While the concept of hydrogen-powered vehicles is not new, it is nonetheless a giant step forward for R&D in the Indian automotive sector, particularly with Tata Motors and ISRO coming this close to making a production version. The bus is currently under trial as the auto major and ISRO try to make it as market feasible as possible.

A fuel cell is basically an electrochemical device that combines hydrogen and oxygen to produce electricity. Vehicles run on the fuel-cell technology are two to three times more efficient than the conventional vehicles and are completely environment friendly. They also use a completely different propulsion system than conventional vehicles. Also,  hydrogen is available in abundance in atmosphere, making it the ultimate low-emission fuel.

For decades, hydrogen has been used as a rocket fuel in space programmes. Toyota has already announced its plan to put a fuel cell powered sedan in the market by 2015.

"This is a significant stride for automobile industry for future transportation. In this vehicle there will be zero pollution since the product of cold combustion is water. This is a result of great team work of Tata Motors and ISRO specialists with contributions from DSIR (Department of Scientific and Industrial Research) and PESO (Petroleum and Explosive Safety Organisation)," said Gnana Gandhi, technical team lead and honorary adviser, ISRO.

Tata Motors and ISRO had joined hands in 2006 to develop the hydrogen-powered vehicle using fuel cell technology.A major hurdle during development was storage of the highly flammable hydrogen fuel. It is here that ISRO used its years of cryogenic expertise to use liquid Hydrogen to power engines. The Tata Motors and ISRO engineering team designed and developed the Fuel Cell Power System (FCPS) for the Bus starting from 20 KW to 120 KW. Numerous tests carried so far revealed that the technology used  is absolutely safe and performed as intended.

Cryogenics relates to the study of very low temperatures. To store hydrogen in liquid form, it must be cooled to -423 °F.

"This environment friendly bus is ideal for stop and go applications and is built on rear module low entry platform, equipped with a ramp facility, pneumatic door operations, and climate control features. The fuel cell technology makes this bus completely clean and silent on road," said a Tata spokesperson.