An all-new generation of the Mercedes-Benz's flagship sedan, the S-Class is expected to be launched in India sometime next year. However, a spy shot surfacing the internet gives us a glimpse of what to expect on the inside of the upcoming flagship sedan. 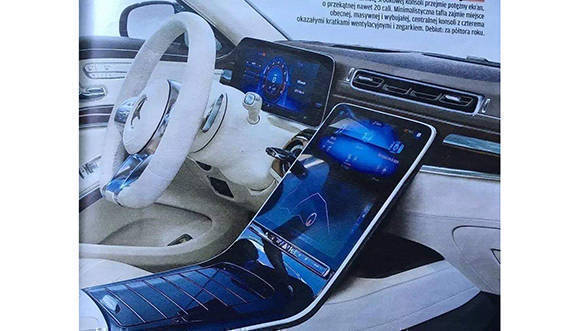 The car seems to be spotted in Bahrain and the source confirms that it is a W223 S-class which was already spotted multiple times on test doing rounds in the International markets. Although, this time the shots reveal a large vertical infotainment screen that extends down to the centre console. The instrument cluster is an all-digital horizontal screen. It goes without saying that the newer S-Class will be equipped with the MBUX (Mercedes Benz User Experience), however, we believe, the interface will be updated for the 2021 model year.

The new S-Class will mostly have a 3.0-litre straight-six engine and a 4.0-litre V8, however, with a mild hybrid system married to the I.C engine. For the Indian market, a diesel mill will be on offer as well. Expect the S-Class to be launched in India by late 2020 and the flagship sedan will rival the Audi A8 and the new BMW 7 Series.