Suzuki has brought in the naked 2017 GFX-S750 at the Intermot 2016 show. This one replaces the GSR750 and takes design inspiration from the larger GSX-S1000. The new design features a new headlight and tailights, rear fairing, , footpegs, swingarm and a belly pan. It gets a an redesigned swingarm, new 10-spoke cast aluminium wheels running on 120/70ZR17 and 180/55ZR17 Bridgestone S21 tyres. It will be available in metallic triton blue / glass sparkle black, pearl mire red and metallic matt black. 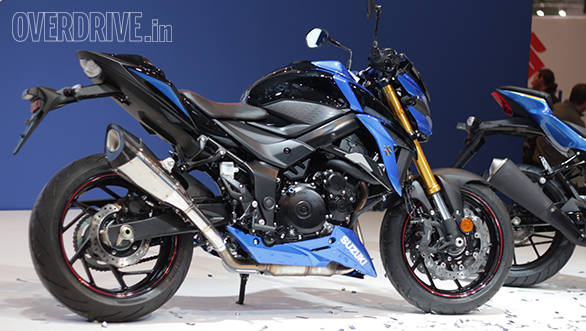 As a part of 2017 update, the Suzuki GSX-S750 gets a tweaked liquid-cooled, inline-four cylinder, four-stroke engine that now makes an additional power of 8PS to a total of 113PS. Suzuki claims that the engine mounting angle is close to vertical. This helps realise the short wheelbase wanted on a naked model.

Additionally, the 2017 GSX-S750 also gets Suzuki's updated traction control system which detects front and rear wheel speeds, throttle position, crank position and gear position and accordingly reduces engine output if wheel spin is detected. Like the V-Strom and the new GSX-R1000, the GSX-S750 also gets low rpm assist which raises the engine speed in the lower range thus providing smoother launches. It gets Nissin radial calipers with 310mm floating discs and ABS will be offered as standard.

It is most unlikely that Suzuki will bring the GSX-S750 to India.