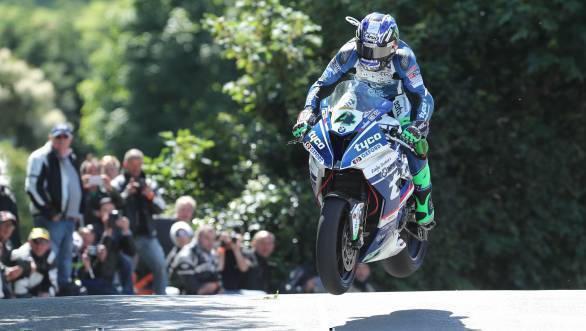 The opening race of the 2017 Isle of Man Tourist Trophy was the RST Superbike TT. Victory at the event went to Ian Hutchinson, who claimed his fifteenth TT win astride a Tyco BMW. It's been a while since Hutchinson made it to the top step of the TT podium in the premier big bike class, with his last win being in 2010. But the 37-year old Yorkshireman's win now moves him past Mike Hailwood in terms of the number of wins at the Isle of Man.

Early leader, and race favourite, Michael Dunlop, who was riding for Bennetts Suzuki, retired on the second lap of the race at Handley's Corner. This, after he set the fastest time of the race, clocking 131.13mph, that was 1.8 seconds over Harrison before heading into retirement.

Given that victory at the TT (astride a big bike) had eluded Hutchinson for a while, he himself had doubts during the race. To begin with, he was down in fourth place, and began wondering whether or not he had set the bike up well enough for a victory. But then, like a good TT rider, he decided that since it was just six laps, he would give it his all. Soon Hutchy found himself leading the race, but things were tricky. There were backmarkers to get past and his lead had been reduced to two seconds. Fortunately, he still managed to win from Hickman. Dean Harrison finished eight seconds adrift in third.

TT favourite, Guy Martin, crashed out on the first lap at Doran's Bend. He escaped with no injuries.