Is that a Mahindra Mojo electric bike?

Earlier this year, Mahindra Two Wheelers launched the Mojo UT 300 that was positioned Rs 21,000 lower than the twin-silencer fuel injected Mojo XT300. And now an electric version of the Mahindra Mojo has been spotted by a Cartoq reader in Bangalore near the Bosch factory. The image that has surfaced online is that of a dual-tone Mahindra Mojo prototype sans the regular exhaust and gear shifter.  The engine area features extension of the tank panels, covering the whole engine. Also, instead of a chain drive, this one sports a belt drive. While there is no confirmation of any sort from Mahindra about the Mojo electric, the image also shows Hero electric vehicles parked beside it, adding some more weightage to the speculation. 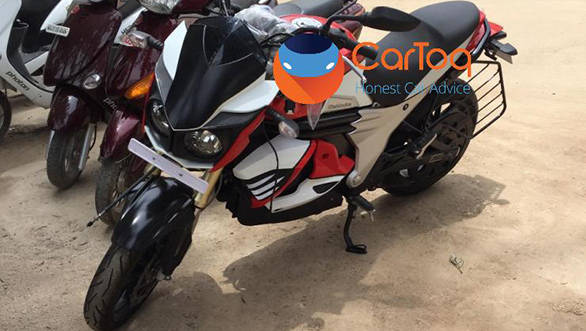 The engine area of the Mahindra Mojo electric features extension of the tank panels, covering the whole engine. Also, instead of a chain drive, this one sports a belt drive.

The Mahindra Mojo comes with a 295cc single cylinder engine producing 27PS of power and 30Nm of torque with a top speed of 147kmph. It has a long wheelbase and gets a set of Pirelli Diablo Rosso II tyres.  The Mahindra Mojo, in spite of having an impressive engine, has not been able to clock strong sales numbers for Mahindra two-wheelers. The motorcycle manufacturer has been constantly updating the Mojo with the introduction of touring edition and also the stripped down UT300, its rivals in India like the Bajaj Dominar 400 come across as a more value for money offering.

It is still not clear if the spotted motorcycle is a Mojo electric prototype by Mahindra or if it is a part of component testing by any other manufacturer. Looking at the rapid developments Mahindra has been making in the EV space in India and globally (Automobili Pininfarina's PF0 electric hypercar concept), a Mahindra Mojo electric is something that the company can launch in India in the near future. Let us know your comments on the Mahindra Mojo electric in the comment section below.