Is virtual the best way forward?

"The hate of men will pass, and dictators die, and the power they took from the people will return to the people."

It is a little odd to have visuals of Charlie Chaplin dressed in khaki floating around in my head at this point. But, standing there at the launch of the Nissan GT Academy, watching drivers ensconced in monopods, trying hard to break lap records at Silverstone, and also listening to Guillaume Sicard, the head of Nissan's India operations talking about the company's aim to "democratise motorsport", it's these words from The Great Dictator that come flashing into my mind. 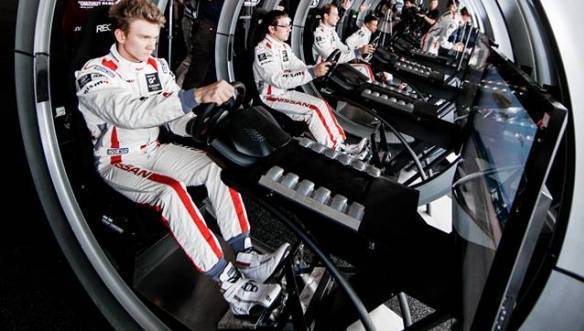 The democratisation of motorsport - it seems like a noble thought indeed. It involves handing over the power of motorsport to the people who want to race in an attempt to make motorsport completely equal opportunity. And an attempt to turn motorsport into a zero-investment affair on the part of the competitor. As a participant, you have two choices, either play Gran Turismo 6 online using your own PS3, or head to one of the selection rounds at a city near you. If you're good enough, the GT Academy, it is said, will change your life.

The presentation that is played out on screen shows visuals of young racers, completely and utterly delighted by the fact that they are finally being given a chance to race, actually race. Real racecars, legendary racetracks, mind-boggling speeds. It's the success stories of the Nissan GT Academy to which we are introduced. The heartwarming story of a Russian fisherman - Mark Shulzhitskiy - whose dream to become a professional racecar driver was realised when he won the GT Academy. In fact he also got a chance to pilot the No 21 GT-R LM Nismo at the 2015 edition of the 24 Hours of Le Mans. That the car ended up retiring during the 10th hour of the race is another matter entirely. But the fact that Shulzhitskiy managed to compete in what is undoubtedly the greatest four-wheeler endurance race in the world, that is something very special.

But for every driver who is on top of the world after the GT Academy, there are likely to be ten who have hit rock bottom. Something I become aware of when speaking to one of the finalists from last year's India round. "Oh, real life sucks now!," he says to me when I ask him whether he feels a little like he's been hung out to dry. Sure, they were handpicked, taken to Silverstone, trained by professional racecar drivers, put on a fitness regimen and given every lesson possible that a racecar driver needs to be given. But ultimately, it is only the winning driver who got a seat to go racing in Canada in the Nissan Micra Cup, and justifiably so. One doesn't expect Nissan to go about doling out free drives to absolutely everybody.

But the drivers who didn't make it, are left behind 'to figure this motorsport stuff out on our own'. Having tasted success of some sort, and experienced 'proper racing', they now need to start from the bottom of the ladder again. From Silverstone to Sriperumbudur. From never having to think about where the money to race would come from, to having to do the rounds for sponsorship. It's stuff that they simply aren't prepared for. Certainly not as prepared for as drivers who have come up in motorsport the hard way.

There's more though. There were videos of Jann Mardenborough's rather frightening crash at the Nurburgring earlier this year - his Nissan GT-R airborne before making contact with the barricade - in what was a freak accident with no blame to be placed anywhere. Well, it was a crash in which one person was killed. Needless to say, young Mardenborough was rather shaken up after the episode. It's something that would happen to any normal human being, any regular driver and also to any racer. But there's also the fact that when you're dealing with virtual reality, you have no real-world consequences to face. A racer who grew up accepting the fact that every single time he went out on track, he might hurt either himself or someone else, is certainly more capable of handling death in motorsport. To pull someone out of a world where there are no consequences and then make them come to terms with the extremely harsh realities of motorsport, that can be quite tough.

Now, don't get me wrong. I am not saying that the Nissan GT Academy is a bad thing. I think the fact that the Academy gives starry-eyed racing fans the opportunity to make their dreams come true is terrific. If one of them makes it all the way to the big bad world of real racing, then it truly is mission accomplished. But, I can't also help but think that with the GT Academy, at least in India, you either go from being a gamer to an international racing star. Or you go from being a gamer to a racer right back to being a gamer. To me, that isn't the democratisation of motorsport. It's a lottery.