Michael Dunlop's got the burden of the family name resting on his shoulders. And that can be a tricky thing to deal with. The pressures of racing at the hallowed Isle of Man are trying enough - one small miscalculation on the Isle and you'll find yourself wrapped around a lamp-post or worse. Add to that the constant nagging thought of living up to the family legacy always at the back of your mind and it's the sort of thing that could well cause a body to develop a nervous tic, have something of a mental breakdown and the like. But, we're not talking of a mere mortal here. We're talking of someone who rides relentlessly at what is easily the most terrifying road race in the world, year after year, in a quest for glory. And clearly the 25-year old from Ballymoney has a handle on things as was in evidence when he won the Senior TT at the Isle of Man this year. It was Michael's first victory in the Senior TT, which saw Conor Cummins finish second and maverick lorry mechanic turned motorcycle racer Guy Martin finish third. Dunlop's older brother William Dunlop ended up breaking a leg (not the good kind) when he crashed on Lap 3 of the 6-lap race. The win in the Senior TT is now Michael's eleventh TT win, something that leads people to believe that the BMW rider is very likely to break his uncle, the legendary Joey Dunlop's record of 26 Tourist Trophy wins. He joins Steve Hislop and Phillip McCallen on eleven wins. 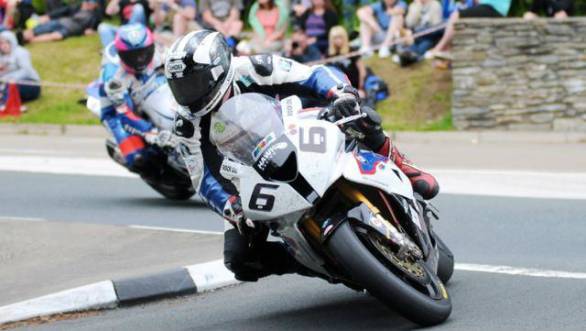 When the motorcycles set of down Glencrutchery Road for the first lap of the Senior TT race, Dunlop was just ahead of Guy Martin. By the end of the second lap, Dunlop had set the fastest time of the race by clocking 131.67mph (210kph) and increased his lead to 7.5 seconds over the following pack. When the third lap was over that lead had further increased to 11 seconds to Cummins who was in hot pursuit on his Honda. And while Cummins managed to reduce the gap to Dunlop over the course of the next few laps, there was just no way of catching him. He had to remain content with second while Guy Martin, in pursuit of TT glory for the 10th time, had another miss.

The Metzeler Post TT Races were knocked off the calendar due to foul weather. In the interest of safety, the races that were scheduled to run on Sunday, June 7, weren't held. Not that that affects young Michael one bit. Given that he's still got 10 whole years of TT racing left in him, catching up with Uncle Joey might be a very real possibility.