The highly awaited results of the presidential elections of the Federation of Motor Sports Clubs of India (FMSCI) have finally been released. J Prithviraj has been announced as the new president of India's ASN, with Tutu Dhawan being confirmed as the vice president. The new council has also been elected to office and will serve the term between 2014-2015. Prithviraj replaces Vicky Chandhok as the president of the FMSCI. 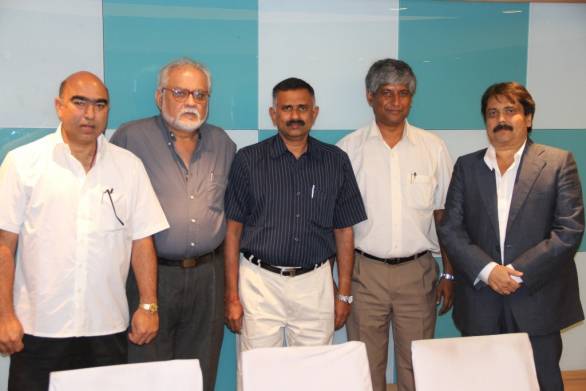 From left: Akbar Ebrahim of Meco Motorsport, Shrikant Karani of PCRT, J Prithviraj - the newly elected president of the FMSCI, J Balmurugan of Spitfire and Sanjay Sharma of HMSA

The newly elected FMSCI president has been actively involved in Indian motorsport over the last two decades, with a special focus on rallying - both in the capacity as a participant and an organiser. Prithviraj has also been a councillor since 2007 and has served in the past as the vice president of the FMSCI for two years. The Coimbatore-based motorsport enthusiast has also served as the chairman and member of FMSCI sub committees in the past.

Commenting on his election to office, Prithviraj stated "As part of the last council our biggest achievement was bringing Formula 1 to India. Now our role will be to ensure we maximise the benefits of that to build national motorsport events across the country. The newly elected council is extremely excited of the task that lies ahead and I am confident that this is the perfect team to take the sport forward."

The newly-elected Council has outlined areas on which it will focus in the year ahead. A statement released to the media declared that the prime focus would be that policies and procedures would take precedence as opposed to just the people involved in the sport. The second aim of the council will be to ensure that the best person for the job will be selected in order to ensure that the sport runs seamlessly. The third objective that has been outlined will be that there will be access to all information with regard to the FMSCI made available. The Federation also stated that they would partner with the auto manufacturers and ancillary manufacturers to increase their involvement in the sport.

In addition to this the FMSCI has stated that they will soon launch a new website that will be easy to use in order for people to access information - regulations, schedules, entry forms, penalty information and the like.

Prithviraj, the newly elected president of the FMSCI, also announced that an advisory body would be formed that would work with auto manufacturers and the government. He stated, "The dedicated committee will be entrusted with the task of working closely with auto manufacturers and government officials. Motorsport is the perfect platform for auto majors to showcase their products and get maximum visibility out of it. We are very happy by the government's decision to modify the trade policy to facilitate easy import of cars and motorcycles for racing events. We still feel there is a lot of work to be done."