The Kari Motor Speedway near Coimbatore continued to witness fervent motorsport action on Sunday, October 14, the third day of Round 3 of the JK Tyre National Racing Championship. A series of protests in the LGB Formula 4 and the Novice Cup had as much impact on results as the action on track.

Rohit Khanna won the first Formula 4 race of the day, carrying on his good run from yesterday's race. But the race was marred with incidents, this led to a number of protests that saw him being penalized by 20 seconds and slip down from No. 1 to 13.

This decisions effect spilled on to the next race of the day with Khanna could only manage a DNF. Championship leader Vishnu Prasad took had a spate of poor results but just held on to his championship lead with 59 points. Raghul Rangasamy is just behind him at 57 points.

Chittesh Mandody and Sarosh Hataria we're first and second in both races after the final classification. Following them were Sohil Shah in first and Raghul Rangasamy in the second race. 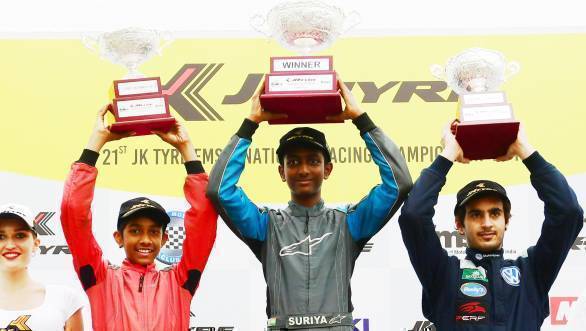 There was off-track drama at the JK Tyre Novice Cup too. Hashim EKP had won all three races over the weekend to move to the top of the championship, after it's final race today, was disqualified for a breach of the competition's norms. This led to Surya Varathan claiming the championship and Tijil Rao taking the second place.

The two top tier Euro JK 18 races we're less controversial. Karthik Tharani won the first race with the other two title contenders, Nayan Chatterjee and Ashwin Datta behind him in second and third. The second race began with a top 6 reverse grid starting order. This mixed things up and let Nirmal Uma Shankar, Brayan Perera and Yash Aradhya take the top three positions, in that order.

After round three, Ashwin has the Euro JK 18 championship lead with 74 points, followed by Karthik Tharani at 68 and Nayan Chatterjee at 66.

The Suzuki Gixxer Cup race was again won by Joseph Matthew. But, in a welcome change this wasn't another easy win for him. Second placed, Malsawmdawngliana took the lead early on. Matthew overtook him at the halfway stage only to see Malsawmdawngliana streak past him in the final lap. Eventually Matthew got past only metres away from the finish, a margin of 0.087s separated the two. Syed Muzamil Ali rounded out the podium.

This is Matthew's sixth straight win this season and he looks set to win the championship.

For it's final round in November, the JKNRC will move to the Buddh International Circuit.