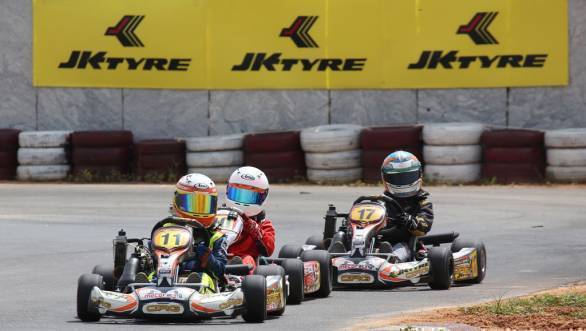 National Karting season kicks off in earnest this weekend at the 1.2km long Meco Kartopia track in Hennur, Bengaluru, where the first round of the 2016 JK Tyre-FMSCI National Karting Championship is being held. And, judging by the practice sessions, all three categories - Micro Max (7-12 years), Junior Max (13-16 years) and Senior Max (above 15 years) - are likely to witness tough battles.

It appears that the drivers to watch out for in the Senior Max category are reigning champion Ricky Donison, Dhruv Mohite, Vishnu Prasad, Nayan Chatterjee and Akash Gowda, who having won the Junior Max category last year has only just graduated to the senior class.

The Junior Max category will feature drivers such as Nirmal Umashankar, Manav Sharma, Paul Francis, Yash Aradhya and the only girl in the championship, Mira Erda.

The battle in the Micro Max category is meant to be between Shahan Ali Mohsin and Ruhaan Alwa.

Talking of this year's field, Akbar Ebrahim of Meco Racing, said, "Since last year, the field has become quite competitive across all the classes. The unofficial timings hint that we will see close racing over the weekend. As more rubber goes down on the track, it will become faster. So, we are expecting some interesting action in the races."

This is the first of the five-round National Karting Championship. We will keep you posted on the results. Watch this space.