April 3, 2015 is the day when Kawasaki will launch the Ninja H2 in India. This 200PS monster sports a four-cylinder, supercharged, in-line four engine that is completely new and built using the technological expertise of Kawasaki Heavy Industries. The supercharger for instance, is self lubricating, has ceramic bearings and is driven by a planetary gear train that runs off the crankshaft. At maximum engine speed the impeller shaft spins at 1,30,000rpm.

The Kawasaki Ninja H2 also sports a Formula 1 and MotoGP inspired dog-ring transmission. In this type of transmission, unlike typical transmissions where the shift fork slides the gear into position, the gears stay in one place and only a dog ring slides into position to engage the gear that is selected.

The Kawasaki ram air intake is placed on the left side of the upper cowl and is designed to channel fresh air into the supercharger. The bodywork is also minimal, an attempt in ensuring quicker engine heat dissipation. 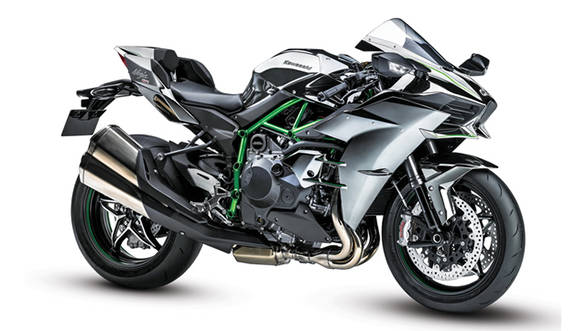 A trellis frame wraps around the engine and Kawasaki has employed special welding techniques to prevent it from looking unsightly. The single-sided swing arm is mounted directly to the engine, eliminating the need to add cross members to the frame, thus contributing to the weight loss.

To make all the performance usable and easy to live with, Kawasaki has incorporated its Kawasaki Traction Control  (KTRC), Kawasaki Launch Control Mode (KLCM) and Kawasaki Intelligent Anti-Lock Braking System (KIBS). In addition, there is an engine brake control and an Ohlins electronic steering damper. Large 330mm radially mounted Brembos at the front haul the H2 down.

The motorcycle is built in a special section of Kawasaki's factory in Akashi, Japan. However, Kawasaki has not announced any plans of launching the track only, manic 320PS Ninja H2R in India.

Expect Kawasaki to price and position the Ninja H2 above the current flagship, the Ninja ZX-14R.
Watch this space for more on the Kawasaki Ninja H2.

Why the Kawasaki H2/H2R is interesting, amazing and irrelevant right now