KTM is ready with another big launch. A microsite, http://www.1290superduker.com/ has been started. The website shows the silhouette of a menacing looking 1290 Super Duke R, the bike's logo on the left, KTM logo on the right, a line that reads 'something big is coming!' and a link to a teaser video at the bottom of the screen.

But what attracts the most attention is a huge countdown across the screen which assures an addition to the orange brigade. The countdown reads just less than 11 days, 10:21:56:3 (at the time of writing), signifying October 1. The teaser video shows a fully geared rider riding the Super Duke at a circuit.

The 1290 Super Duke R was earlier unveiled as a concept at the Milan Motorcycle Show last year, also known as the EICMA 2012 and more recently was demonstrated at the Goodwood FOS . The 1290 Super Duke R draws power from a bored out version of the liquid cooled 1195cc V-twin engine that could churn out close to 200PS. Ride-by-wire, ABS, traction control, chrome-molybdenum steel tubular frame, Brembo brake assembly and light-alloy wheels will be the other talking points. 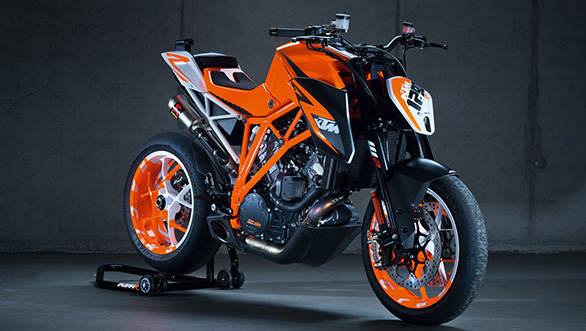 Back at the EICMA, KTM had said that the 1290 concept was "an important and exciting glance into the fascinating future of the Super Duke." KTM has already said that they are not considering the 1290 for the Indian market for now. What they might do is bring it down as a showcase of the company's technical prowess like they have with the RC8 superbike.